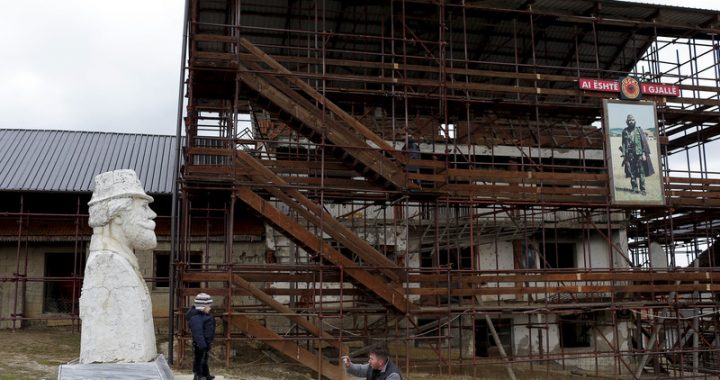 An Albanian family visits the memorial to Kosovo Liberation Army (KLA) Commander Adem Jashary, in Prekaz, Kosovo, 15 February 2013. Kosovo celebrates the 5th anniversary of its independence from Serbia on 17 February. KLA Commander Adem Jashari was killed in 1998 along with members of his family by Serbian Security forces in the village of Prekaz. EPA/VALDRIN XHEMAJ

Relatives of murdered Kosovo Liberation Army commander Adem Jashari criticised football fans who prevented a busload of foreign students from entering the Jashari Memorial Complex in Prekaz because they suspected some of them were Serbs.

Bekim Jashari, the nephew of Adem Jashari, who was killed in 1998 alongside 57 members of his family during a siege by Yugoslav forces, expressed concern after foreign students were barred by members of a football fan group from entering the Jashari Memorial Complex in Prekaz on Sunday because some of them were believed to be Serbian.

“I was worried by some images I saw in which some international students, guests in Kosovo, were prevented from visiting the Adem Jashari Memorial Complex,” Jashari wrote on Facebook.

He said that if they had been allowed to visit, the students, who are attending a summer school in Pristina, would have been able to “get to know the family’s struggle, sacrifice and history, and especially that of the youngsters of our family, since when they were even younger than these visitors, they gave their most precious lives so that their peers could live and act freely”.

The memorial complex in Prekaz commemorates the late family of Adem Jashari, one of the founders of the Kosovo Liberation Army, who was convicted in absentia of terrorism by a Yugoslav court in 1997 and then killed during a three-day siege of his compound in March 1998 together with 57 members of his extended family.

The students were barred from entering by a football fan group called Shqiponjat e Zeza-Drenica (Black Eagles Drenica) from Skenderaj/Srbica, which was a KLA stronghold during the war.

“While identifying the students, we saw they were from different countries and did not hesitate to show their IDs, but during the check-up we came across students who refused to do so using the excuse that they did not have their IDs,” the football fan group wrote on its Facebook page.

“Seeing students from countries that are friendly to Serbia and countries that do not recognise Kosovo as a state, and taking into account the provocations that could be created, we decided that the bus should go back to where it came from,” it added.

The fan group said it welcomed students “who truly want to visit” the memorial in Prekaz, but not “enemies”.

Bus company Arditi Tours, whose vehicle was prevented from entering Prekaz, issued a statement on Facebook to “clarify” that it did not have any Serbian students on board, and said that the vehicle been confused by the fan group with another bus transporting students from the summer school.