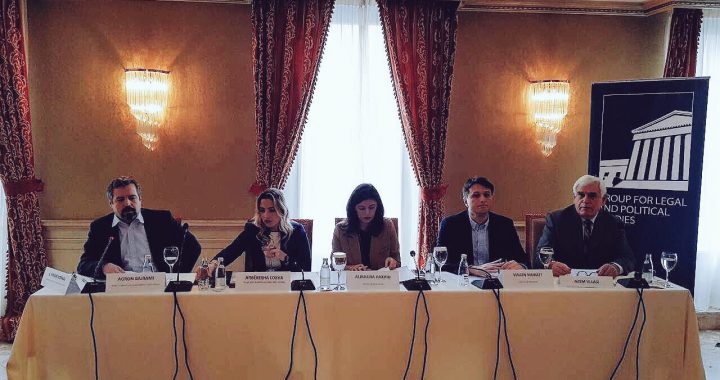 A paper published by the Group for Legal and Political Studies argues that Kosovo needs to emphasize that partition and territorial exchange are off the table of the Brussels dialogue.

Kosovo needs to draw a red line against alteration of its borders, argues a new policy document on the Kosovo-Serbia dialogue.

“Kosovo’s borders shall be inviolable. Kosovo shall not be party to talks that allow the possibility of changing borders,” the paper, published by the Group for Legal and Political Studies, GLPS, and written by Koha Ditore editor-in-chief Agron Bajrami, states.

At a panel discussion on Friday, Bajrami insisted that Kosovo needs a strategic platform outlining its non-negotiables for the Brussels-facilitated dialogue with Serbia.

“It’s high time for Kosovo to come up with a strategic document on what we want to get out of this process,” Bajrami said at the discussion.

The European Commission’s recently-published accession strategy for the Western Balkans lists a “legally binding normalization agreement” between Kosovo and Serbia as a key requirement for EU membership. Some analysts have suggested that Serbia accept an agreement that allows Kosovo to be a member of the UN without the former’s formal recognition of the latter’s independence.

The GLPS policy paper, informed by anonymous discussions with EU officials and independent observers, says that Kosovo should be wary of this potential ‘solution.’

“According to diplomats, Serbia’s agreement to a Kosovo seat at the UN would be a ‘major concession,’” the paper states. “However, as Western analysts note, the barrier to Kosovo’s membership in the UN is primarily Russia, not Serbia…. According to these sources, the offer of a seat at the UN from Vucic is bait that Kosovo should not take.”

The paper said that “Serbian President Vucic himself discussed the partition of Kosovo or exchanging territories between Serbia and Kosovo as a potential solution,” and Kosovo’s leaders–as well as EU leadership–must publically challenge any such ideas.

Kosovo media reported recently that partition of Kosovo was being discussed as a solution. President Hashim Thaci has denied the possibility of such a plan to ever come to fruition.

The policy paper also also suggests that Kosovo introduce a “parliamentary resolution… to vest the Kosovo team with authority to negotiate” an agreement with Serbia, and that political leaders seek consensus and national unity throughout institutions, parties, and society.