Although an ECHR decision has paved the way for Kosovars to get their pensions from Serbia which were wrongfully terminated after the war, a political stalemate and lack of institutional clarity has left pensioners without a dime.

Shaban Kelmendi is a spry 81-year-old. He whisks us off to a small office next to the Kosovo Philharmonic Orchestra which he uses as the head of the neighborhood council, an honorary post he has held since the 1980s. Kelmendi worked for 42 years as a teacher and school administrator and his former profession is reflected in his demeanor. Kelmendi is pedantic and very careful to back all his claims with documents that he swiftly produces from his leather briefcase.

“I have become a lawyer in the past 17 years,” he says laughing loudly, ruminating on the broad legal knowledge he gained since suing the Serbian state in 1999, and recently, the Kosovo Ministry for Labor and Social Welfare for negligence. Since 2014, Kelmendi has been elected a representative of the Kosovo Federation of the Pensioner Unions, tasked with the job of getting his fellow pensioners their money back from the Serbian Pension Fund.

With the exception of Kosovo Serbs, the remainder of the around 90,000 Kosovo pensioners lost their pensions when the Kosovo War ended and the Serbian administration retreated from the country in 1999. The pensions were terminated without an explanation.

“My last pension was in October 1999. When I went to pick up my pension, the official told me, ‘Your pension has been cut,’” explains Kelmendi, who was living in Novi Pazar, a city in southern Serbia, at the time. Born in Mitrovica, Kelmendi started working as a geography and history teacher in 1951. After four years of lecturing, he became a school administrator and later worked for the Secretariat of Education in Prishtina, the equivalent to the Ministry of Education today. He retired in 1993 at the age of 60, the retirement age for men foreseen by Yugoslav laws (women retired at the age of 55).

Around 90,000 Kosovo pensioners lost their pensions when the Kosovo War ended and the Serbian administration retreated from the country in 1999. The pensions were terminated without an explanation. Shaban Kelmendi

Kelmendi spent years complaining to courts in Belgrade and Novi Pazar, including the Supreme Court of Serbia, until he got the Serbian state to recognize his right to his contributions as a pensioner in 2005. The decision was never enforced, and in 2009, Kelmendi lodged a complaint to the European Court of Human Rights, ECHR, in Strasbourg before the decision for his pension to be continued was finally disbursed by the Serbian Pension and Disability Insurance Fund in 2012.

Today, he receives around 450 euros per month (depending on the exchange rate between the Serbian dinar and euro), a stark contrast to the 158 euro basic pension available to all Kosovars.

“According to my calculations, every pensioner is owed around 40,000 euros on average. If we’d get these pensions, there would be no need to complain,” says Kelmendi. The current pension scheme, funded by the Kosovo budget, foresees two categories: a basic pension for all people above the age of 65, and a higher pension for people who paid contributions to the pension fund before 1999.  Both, however, function as a social welfare scheme that can hardly cover even the medical costs of most retirees.

Neither the United Nations Mission in Kosovo, UNMIK, which administered the country until 2008 when Kosovo declared its independence, nor the Kosovo government have managed to come to an agreement with Serbia regarding pension contributions of Kosovo citizens.

The ECHR’s ruling on the Grudic case is “a pilot judgement,” says Kosovo Ombudsperson Hilmi Jashari.

“Instead of reviewing all cases of the same nature, [the court] decides upon a single case and then through that case asks the responsible parties to respect the principle decided with the judgement,” explained Jashari, adding that the right to the money held by the Serbian Fund for Pension and Invalid Insurance is recognized for all potential plaintiffs. 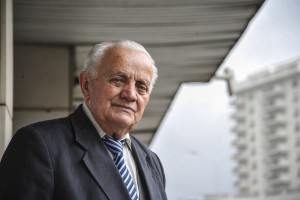 “The decision is final,” says Kelmendi in his small office while sounds of the orchestra practice fill the building. “Nobody has to pay a single cent anymore. Not to lawyers, not to anyone else.”

Nevertheless, Serbia has yet to fulfil this obligation in its entirety. According to the State Legal Office of Serbia, until June 2016, the Serbian Fund for Pension and Invalid Insurance received 9,539 requests for the continuation of pensions from people living in Kosovo. Only 3,689 requests were approved, while about two thirds are pending due to “lack of documentation.”

“There are difficulties in the decisionmaking process with regards to received requests,” a representative of the Serbian State Legal Office wrote in a letter to BIRN in July. The office also claimed that difficulties in communicating with applicants have been one of the main deterrents. “Communication with applicants is necessary, especially considering that the entire documentation of the Kosovo pension fund, due to war events, was left there, and this hinders the collection of relevant evidence and facts.”

Most pensioners cannot afford to deal with the bureaucracy of an individual application, which includes the collection of about 12 documents that need to be verified by UNMIK authorities and sent to an office of the Serbian Fund.

“Serbia is torturing pensioners, who are in a difficult material condition…they’ve spent a lot of time, energy and financial means and the number of people who won is very small in comparison to those who have asked for their rights,” said Riza Shala, the head of the Independent Union of Pensioners. “Considering all this, I didn’t think it was reasonable to apply at all.”

“They’re dragging the case,” says Kelmendi, explaining that the decision of ECHR is final but its execution now depends on a cooperation between all stakeholders. He flips open his folder and shows us a 2012 decision of the Kosovo Parliament Committee on Pensions, requesting that the Ministry of Labor and Social Welfare prepare a complete list of pensioners and share it with the Parliament, the ECHR, and the Serbian Pension and Disability Insurance Fund.

“Serbia is torturing pensioners, who are in a difficult material condition...they’ve spent a lot of time, energy and financial means and the number of people who won is very small in comparison to those who have asked for their rights.” Riza Shala, head of the Independent Union of Pensioners.

“The problem with the past pensions has been solved individually,” explained Bahri Xhaferri, head of the pension department of the Kosovo Ministry of Labor and Social Welfare. “The Ministry has not supported a solution to this issue with a specific activity, because this is beyond its competences.”

Xhaferri believes that it is not in the power of the Ministry to solve the pension problem, and considers the ECHR decision only as “a recommendation.”

Ombudsperson Jashari disagrees. All ECHR decisions are final and since Serbia is a member of the court and the Council of Europe, it is obligated to enforce the decision, he said.

The total amount of the owed contributions is considered to be as high as 1.8 billion euros. The Kosovo government has insisted to put the issue on the agenda of the dialogue with Serbia since 2011, but this has not happened.

“The issue of the fund is something that needs to be discussed as part of the [Kosovo-Serbia] dialogue and the Fund needs to be returned in its entirety,” maintains Dren Zeka, an advisor to the Minister for Dialogue Edita Tahiri, Kosovo’s chief negotiator in the Brussels-mediated dialogue.

Jashari vehemently opposes the idea of discussing the pensions in the dialogue.

After the fall of Yugoslavia, former republics managed to reach agreements on exchanging pensions and debts. No such agreement exists between Kosovo and Serbia, which has administered the Kosovo part of the fund since 1992, and does not recognize Kosovo as a state. Nevertheless, it cannot deny Kosovo citizens their contributions, it can only make it harder for them to access the funds individually.

Twice a month, Kelmendi picks up his pension at the post office in Gracanica, a remnant of the pre-war Serbian institutions that never closed. Kosovo considers it an illegal parallel institution. Such parallel structures of the Serbian state have functioned in Serb-majority municipalities since 1999, although Kosovo government has requested that they be closed down. Kosovo citizens, including Bosniaks, Turks, Romani and Ashkalis, who do not live in municipalities where they function have to travel to the nearest Serbian post office to get their money.

Kelmendi is skeptical of both the Serbian and Kosovo governments and their willingness to solve the stalemate.

“They want to deny our rights one way or another,” he says in front of the post office. Although the Kosovo Parliamentary Committee on Pensions requested that the Ministry of Labor and Social Welfare compile a full list of pensioners of the period 1990-98 and share it with all relevant institutions, including the Kosovo government, the Serbian Ministry of Labor, and the ECHR in Strasbourg back in 2013, this has not happened yet.

“They did not do this at all. So, the union took it upon ourselves to send the registry to Strasbourg through Albania’s committee in the Council of Europe,” explained Kelmendi.

“Kosovo had only one obligation – to provide the Serbian Pension Fund with access to documentation,” says Kelmendi impatiently. As a representative of the Federation of Pensioner Unions, Kelmendi filed multiple complaints and finally sued the Kosovo Ministry for negligence in 2016. The case has yet to come to court.

“Everyone tells me we have to wait! We don’t have to wait an extra day!” exclaims Kelmendi, pounding the table with his fist. “I’m doing all of this for God’s grace! I know what I suffered myself. For 17 years, 17 years without any compensation – they’ve crippled pensioners.”

A response letter to Capussela's comments on the Trepca law

by Valentin Toçi
Next: Opinion

Rama, Vucic, and the horde of Kosovo bogus radical intellectuals