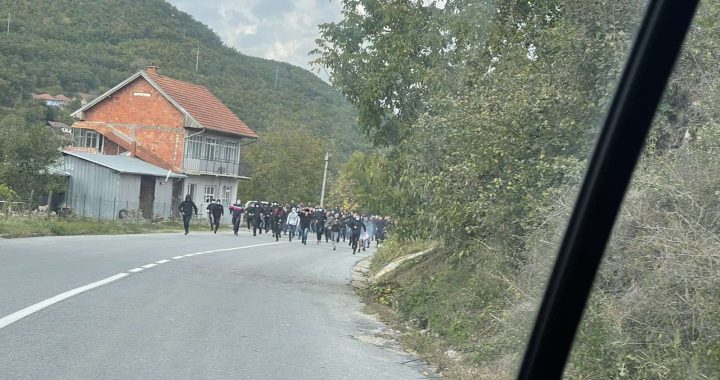 Kosovo Pressed to Secure Journalists’ Safety After Attacks in North

After Wednesday's attacks on journalists by Serb protesters in northern Kosovo, the Association of Journalists of Kosovo, AJK, says it is pressing Kosovo's authorities to guarantee journalists' safety in such critical situations.

After Wednesday’s violence in North of Kosovo between local Serbs and Kosovo police conducting an anti-smuggling operation – when journalists were also attacked by protesters – Kosovo and Serbian journalist associations have called for safety measures for their colleagues.

The Association of Journalists of Kosovo, AJK, told BIRN that it was pressing Kosovo institutions to provide security and conditions for journalists to do their job, especially in critical situations.

“Institutions must do their job and provide security not only for journalists but for all citizens. The AJK has consistently asked institutions to provide this security… and warned of the situation,” Naim Sadiku, a board member of AJK, told BIRN.

He added that even “normally … the circumstances in the north [of Kosovo] have made it difficult to provide security for journalists, and any citizen who may be in that situation”.

“AJK yesterday, during the entire day, was in constant contact with journalists reporting from the North of Kosovo, and with the Ministry of Interior regarding the participation or presence ofpolice officers in the north of the country,” Sadiku stressed.

Journalists of the local Kosovo Serbian-language media outlet, Kossev, also reported threats and attacks, after which they decided to withdraw from the field.

Other journalists from local Kosovo media outlets such as T7, Klan Kosova, RTV Dukagjini, ATV, Kanal 10 were also attacked while reporting on the ground.

In a joint press conference with the director of police, Kosovo Interior Minister Xhelal Svecla on Wdnesday said that “journalists were today witnesses but also victims of the rampant violence of the criminal structures there [n northern Kosovo]”.

The director of police, Samedin Mehmeti, told the media on Wednesday that police had contacted journalists in at least two instances to offer them the means to withdraw, but “they had already withdrawn”.

“We would like to come to the aid of any group and we had a group [of police officials] that was ready to go and withdraw journalists,” Mehmeti said.

Several international journalists’ associations called on Kosovo to provide a more secure environment for journalists after they were attacked by protesters.

The Coalition For Women In Journalism, CFWIJ, reported at least five instances of women journalists who were attacked by the protesters, one of whom was a BIRN journalist on the ground.

Associations of journalists from the wider region, from Belgrade, Podgorica, Pristina, Sarajevo, Skopje and Zagreb released a joint press statement condemning the attack on journalists.

They added: “We will inform all the relevant national and international stakeholders about this case. Each attack on journalists is an attack on public interest, democracy and rights of all citizens.”

Ricardo Gutierrez, the General Secretary of the European Federation of Journalists, on Twitter called on the Kosovo police to protect journalists.

The International Federation of Journalists also joined other associations in condemning the attacks and calling for the protection of journalists.

Media lawyer Flutura Kusari also urged the Kosovo police on Wednesday to provide security to journalists on the ground.

BIRN asked the Kosovo government if it had a strategy to offer a safer working environment for journalists, and whether the Kosovo police and prosecution were investigating these attacks, but did not receive a response by the time of publication.