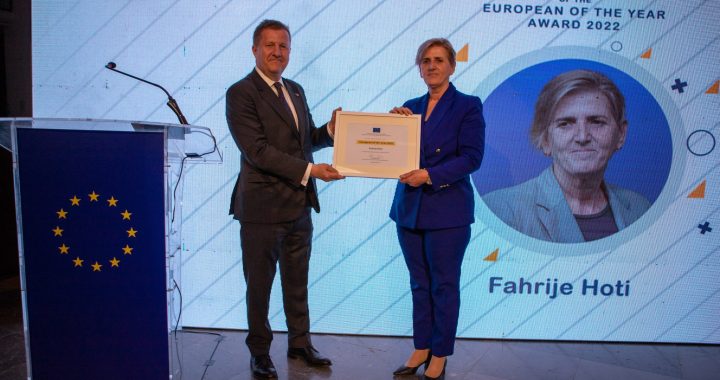 Fahrije Hoti receives the award from the head of the EU Office in Kosovo, Tomas Szunyog. Photo: Europe House Kosovo.

Fahrije Hoti, whose struggle to rebuild her life after her husband disappeared during wartime became the subject of a feature film, was given the award by the European Union’s office in Kosovo.

Fahrije Hoti, a Kosovo woman who started a successful agriculture business after losing her husband in the 1998-99 war, was given the annual European of the Year by the European Union’s office in Kosovo on Monday evening.

Hoti, from the war-ravaged village of Krusha e Madhe/Velika Krusa, was described by the head of the EU’s office, Tomas Szunyog, as “the best example of how to turn a painful experience into courage and resilience”.

Her husband went missing following a massacre by Serbian forces in the village of Krushe e Madhe/Velika Krusa on March 25, 1999 in which 240 ethnic Albanian civilians were killed.

Hoti’s company, Kooperativa Krusha, which was established after the war, currently employs some 50 women from the village. It sells 43 products across Kosovo and in a host of other European countries including Switzerland and Germany.

Her story became known worldwide last year when the film ‘Hive’ told the story of her life and post-war struggles.

The film won all three main awards, the Grand Jury Prize, the Audience Award and the Directing Award, in the World Cinema Dramatic Competition at the Sundance festival and was selected as Kosovo’s entry for the Best International Feature Film at the last year’s Academy Awards.

“I feel privileged winning this award,” Hoti said at the prize-giving ceremony on Monday.

“The sacrifice of Krusha’s women has been a journey of success. We didn’t stop to think about the past but we tried to work for the future of our children,” she added.