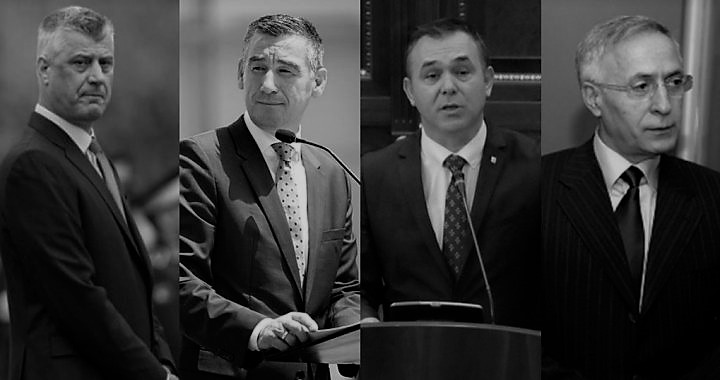 Between the excitement of the American presidential election and the scary news about COVID-19, I was about to miss the opening of the trial of the Kosovo Liberation Army’s former General Staff at the Kosovo Specialist Chambers. Now that I have focused on it, I wish I had missed it altogether.

The truth is, I believe in international justice, but what I read and understood is a significant blow to my confidence in it.

Let’s start from the beginning: the Kosovo Specialist Prosecution’s indictment of Hashim Thaci, Kadri Veseli, Rexhep Selimi and Jakup Krasniqi on November 4. The charges of crimes against humanity and war crimes under international law are severe. Still, I will not address the merit of those crimes since I am not an investigator, a prosecutor or a defence lawyer.

However, I found plenty to say about the framing of those crimes in the narrative that goes under the section entitled “Statement of Facts”.

This title rings Orwellian already after reading the first few lines: “In 1989, in the context of increasing tensions and schisms throughout the former Yugoslavia, Kosovo’s status as an autonomous province was rescinded. Thereafter, Kosovo Albanians overwhelmingly supported a referendum for independence…”

The indictment’s incipit is paradigmatic of the language used by the prosecutor’s office throughout the document. It is an incredibly vague and obfuscating language that makes abundant use of misnomers and the passive voice.

“Schism”? Schism is a split between opposing parties or the formal separation of a Church into two Churches. In 1989, the Socialist Federal Republic of Yugoslavia did not face a schism but a deep constitutional and political crisis leading to war. Kosovo’s autonomy was not “rescinded.” The Assembly of Serbia did that, forcibly.

The facts that should be stated in this section are full of inaccuracies, when not completely ignored. The timeline is misleading. Just one word covers the events from 1989 to the referendum for Kosovo’s independence in 1991: “thereafter.”

“Thereafter” lays a blanket on three years of eventful facts: widespread peaceful protests by Albanians in Kosovo, including a hunger strike by miners that was violently repressed; the state of emergency declared by the Yugoslav presidency; the mass incarceration of Albanians and their torture in jail; the taking of the Kosovo Assembly as a hostage before its abolishment, and the dismissal of all Albanians from the workplace, hospitals and schools.

The Specialist Prosecutors are clearly deficient in history, but let’s not ask them to read history books – reading their colleagues’ work at the International Criminal Court for the Former Yugoslavia, ICTY, would be enough.

Take this section from the ICTY’s 2005 judgment in the case against KLA leader Fatmir Limaj and two others: “Part III. A. Political Context in Kosovo and Emergence of the KLA”. It contains all the facts that should be mentioned.

Another good read for context is the 2011 ICTY judgment of the Who’s Who of the Serbian military and political leadership (former President Milan Milutinovic and five others). In the judgment, “Part III. Historical Background” is based on serious and cross-checked reporting by Human Rights Watch, Amnesty International and UN special rapporteur Tadeusz Mazowiecki.

The armed conflict with Serbia, recognised by the ICTY (Milutinovic et al. Judgment, Para 820), deserves only a mention in the Specialist Chambers’ indictment, as a struggle between two rival parties. The facts differ. Since early 1998, Serbia deployed police, regular army, reservists, special forces and veteran volunteer formations of the Bosnian genocide in Kosovo. At that time, the KLA was a group of a few hundred poorly-armed individuals.

The war started in March 1998 when Serb troops massacred 83 Albanians in Drenica, only some of them KLA fighters. That event alerted ICTY prosecutor Louise Arbour that Serbia was perpetrating war crimes. By the summer of 1998, there were hundreds of thousands of displaced Albanian civilians. It was then that the KLA grew in numbers and consensus.

This indictment portrays a war in which any action by the Serbian security forces was a straightforward counter-insurgency operation. That is factually untrue, since massacres, rapes and displacement happened even where there was no active KLA. When there was, the response was disproportionate.

The fact is that Serbia’s leadership constituted a joint criminal enterprise with the goal of modifying the ethnic balance of Kosovo, as the ICTY concluded.

According to the Specialist Prosecutors, the “contextual elements” for crimes allegedly committed in the Kosovo war were not the facts established by the ICTY but the will of the People’s Movement of Kosovo “to coordinate the activities of armed units in Kosovo.”

Allegedly, the People’s Movement of Kosovo came up with the name KLA – a clear inaccuracy according to the Limaj et al. judgment – and went on to build a joint criminal enterprise to eliminate “Opponents” and control Kosovo’s territory.

Who were these Opponents? Collaborators with the Yugoslav state and its forces, and people who did not support the KLA and Kosovo’s Provisional Government, including members of the Democratic League of Kosovo, Serbs, Roma people and people of other ethnicities.

How do we know that the KLA had those goals? By inference from their behaviour. This is where the Specialist Prosecutors’ story gets weird.

It says that during the NATO bombing, “KLA soldiers and large numbers of Kosovo Albanian civilians moved from Kosovo to Albania” (my italics). But that has been the line of defence of all the convicted Serb war criminals. It is not a fact.

The facts are that NATO did not intervene against Serbia to cover up a People’s Movement of Kosovo/KLA conspiracy; that the majority of KLA soldiers stayed in Kosovo, and that about 800,000 ethnic Albanian civilians were expelled by Serbian security forces in a campaign that killed and raped thousands of them.

According to the Specialist Prosecutors’ indictment, after the war ended, “large numbers of KLA soldiers and Kosovo Albanian refugees returned from Albania and moved into areas previously controlled by FRY [Federal Republic of Yugoslavia] forces” (my italics).

This is a partial truth, expressed in oblique language that betrays bias. It sounds as if ethnic Albanian refugees and KLA soldiers invaded Kosovo. Should they have stayed in Albania? They returned home, and so did the Yugoslav forces, to Serbia.

Suppose the Specialist Prosecutors had wanted to rewrite the history of the Kosovo war. They failed miserably by any factual standard. Unfortunately, their parallel universe is the framework in which the KLA leaders currently on trial will be judged. That’s some justice!

Anna Di Lellio lectures in international relations and security at New York University and The New School in New York.