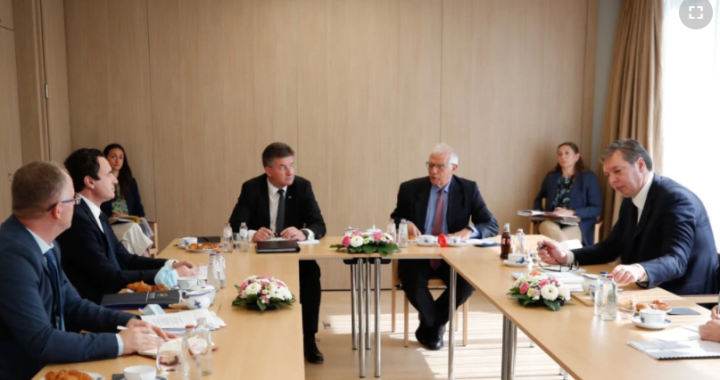 Kosovo PM Albin Kurti told the media that the Serbian delegation dismissed his proposals during the meeting while Serbian President Aleksandar Vucic described the Kosovo delegation as ‘out of touch with reality.’

Kosovo Prime Minister Albin Kurti and Serbian President Aleksandar Vucic met in Brussels on Tuesday, in what EU Special Representative for the Kosovo-Serbia Dialogue Miroslav Lajcak has labelled as “not an easy meeting.”

Lajcak described the first EU-facilitated meeting between Vucic and Kosovo’s Prime Minister as “a very open and frank exchange on what they each wanted from the dialogue.”

Speaking to the media following the meeting, Kurti revealed that he had made four proposals to the Serbian delegation, stating that the first received no response and the other three were rejected.

Kurti said that his first proposal was for the six Western Balkan states to form a new South-East European Free Trade Agreement, a proposal he first outlined at a summit of Western Balkan leaders last week.

According to Kurti, his second proposal was for Kosovo and Serbia to immediately sign a joint peace agreement vowing not to attack each other, as this was never accomplished following the end of the war in 1999.

The third proposal Kurti outlined was for bilateral reciprocity to be established between the two states following mutual recognition, including on the issue of minority communities. Kurti stated that Serbs in Kosovo could have a National Council, as Albanians and Bosniaks do in Serbia.

The Kosovo Prime Minister also claimed that he requested the dismissal of Veljko Odalovic, the head of Serbia’s Commission for Missing Persons due to his position as Chief of Staff of the Kosovo Region between 1997-1999, including during the Kosovo War.

Speaking to the media after the meeting, Vucic did not make reference to Kurti’s proposals, but did state that the Kosovo delegation “came to agree about absolutely nothing.”

The Serbian president added that the Kosovo delegation did not want to fulfill agreements it had signed, and did not want to discuss the Association of Serb-majority Municipalities.

The establishment of an Association of Serb-Majority Municipalities was agreed in Brussels in 2013, with a second agreement reached in 2015 outlining principles for its formation. However, the 2015 agreement was never passed at the Kosovo parliament due to blockades by the opposition. The matter was referred to the Constitutional Court, which found that many elements of the agreement were contrary to the spirit of the Kosovo Constitution.

Speaking in Brussels on Tuesday, Kurti stated that Kosovo’s Constitutional Court has ruled out the formation of the Association, due to it contravening the Kosovo Constitution on 23 points. “We do not want for the majority to be privileged over the minority but we should not allow the same scenario as Bosnia and Herzegovina,” he said.

According to Vucic, the Kosovo delegation also demanded to know when Serbia would recognise Kosovo during the meeting. “They immediately asked to hear from us when we will recognise Kosovo independence,” he said. “I said never. He detonated.”

Summing up the meeting, Kurti stated that the two parties are ready to continue the dialogue process but there was currently no agreement on the agenda for the talks.

Lajcak confirmed that both leaders had agreed that there was no other way forward but to normalise relations between Kosovo and Serbia, and had committed to a comprehensive normalisation of relations through the dialogue.

The EU Special Representative added that the dialogue process would continue before the end of July.