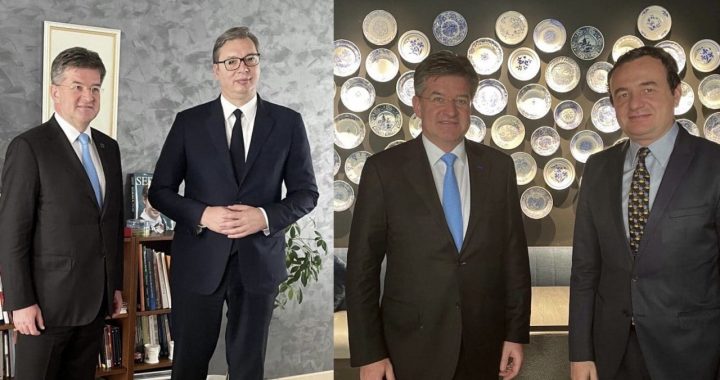 Kosovo PM Albin Kurti and Serbian President Aleksandar Vucic made no known progress in their second meeting with each accusing the other of unwillingness to make any compromise.

No progress was made in the second meeting between Kosovo Prime Minister Albin Kurti and Serbian President Aleksandar Vucic within the EU-facilitated dialogue on Monday, where the missing persons issue, among other things, was discussed.

Serbia’s Vucic said after meeting in Brussels that during the previous conversation he thought it was impossible to have a worse meeting, but after today’s talks, he said, he knows that is possible.

Vucic said after the meeting that he was now even more worried about the security of Serbs living in Kosovo, having in mind the atmosphere and increased attacks on Serbs in Kosovo in recent months.

Vucic said Serbia had agreed with three main points of the EU proposals which had been harmonized with the delegations from both Belgrade and Prishtina, but that PM Kurti did not want to accept the second point, which says no side will do anything which might cause destabilization.

“There were three points, to intensify joint efforts to identify the remains of the missing persons, to refrain from things that could potentially destabilize the situation on the ground and for the main negotiators to meet regularly, once a month, and prepare meetings when necessary,” the Serbian President said.

“They [Kosovo] conditioned all the time with some new political criteria,” Vucic said, adding that Kurti was now mentioning that Serbia was guilty of three genocides against Albanians in Kosovo – the first in 1878, when Serbia gained independence during the Berlin Congress, the second during the Balkan Wars and the Second World War, and the third in 1999, during the Kosovo war.

“We understand that there were crimes on both sides, they do not understand that, they see themselves as victims and Serbs as criminals. That story about genocides is someone’s intention for Serbs to be the worst people in the world,” Vucic said.

However, Kurti had a different view than Vucic, accusing Serbia of not accepting his proposed deal, with six main points, which was in its essence “a declaration of peace”, and was not being open to agreeing on anything Kosovo suggested.

“It was rejected before it was read; this proves their unwillingness to reach an agreement,” Kurti told the media.

Kurti said that he proposed that the phrase “dealing with the past” be added to the missing persons issue, but this was rejected by Vucic although it was supported, he said, by the European Union foreign policy chief, Josep Borrell.

“When our commitment to the missing was expressed to include the word ‘dealing with the past’, this was accepted by Borell but rejected by Vucic,” said Kurti.

Kurti also claimed that Kosovo Deputy PM Besnik Bislimi, who is leading Kosovo’s delegation, “read the 11 points that represent the 11 barriers that Serbia imposes on Kosovo in terms of trade and we have asked for them to be eliminated, but they did not want to hear about this either.”

Joseph Borrell said prior to the meeting, that the future is more important than the past.

“Kosovo and Serbia must finally close the chapter on their painful past through a comprehensive legally binding agreement on the normalization of relations and looking forward to a European future for their citizens,” Borrell said.

Kurti and Vucic had their first meeting in June 2021, but could not even agree on whether the talks went well or not.

While the Serbian President claimed that Prishtina was not open to any compromise and said that Kurti was unwilling to take responsibility or face reality, Kosovo’s Prime Minister said the meeting was constructive and that it made him optimistic.

One month later, in July, the meeting of the delegations in Brussels also produced little except mutual accusations, AND the EU envoy, Miroslav Lajcak, said there was “a lot of work still to be done”.

Kurti vowed in May 2021 to revive the controversial idea of launching an international court case against Serbia for alleged genocide during the 1998-99 war, but experts told BIRN that it’s unlikely to succeed.

Around 1,639 persons, most of them ethnic Albanians from Kosovo, are still listed as missing from the Kosovo war.

Kosovo proclaimed independence from Serbia in 2008. The negotiations between the two sides started in 2011, while the so-called Brussels Agreement – the first document on the principles of normalization of relations between Serbia and its former province – was signed in 2013.

Since then, the two sides have continued to regard each other with distrust.