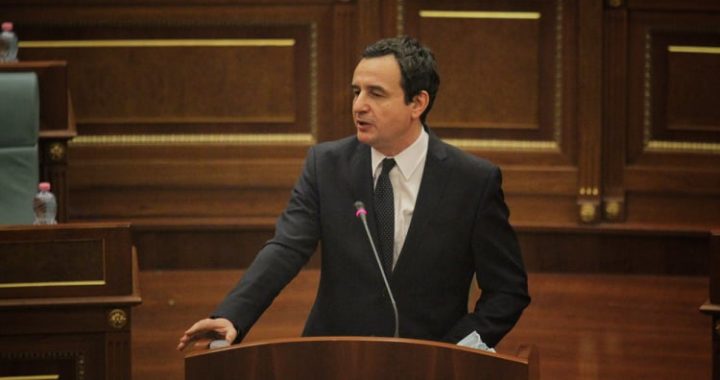 The Kosovo Assembly has elected the country’s seventh government since the country declared independence in 2008, and its second led by Vetevendosje’s Albin Kurti.

Just over 13 months after his first appointment to Kosovo politics’ top position, Vetevendosje leader Albin Kurti was elected as the country’s prime minister for the second time on Monday evening.

In an extraordinary session of the Kosovo Assembly, newly sworn in MPs passed a motion electing a new government led by Kurti, with 67 votes in favour, 30 against and no abstentions.

Addressing the Assembly before the vote, Kurti outlined his priorities for Kosovo’s next government, stressing the need to address issues caused by the COVID-19 pandemic, fight poverty, and clean up the judiciary. “We will continue the vetting process we started in the Spring of 2020,” he said. “An impartial justice system is vital for the country.”

The new prime minister also stated that the dialogue with Serbia must “resolve existing problems and not create new ones.” He added that without Serbia recognising the truth of past war crimes and the contemporary reality of the Kosovo state, “there can be no normalisation between the two peoples and the two states.”

Addressing economic issues, Kurti placed an emphasis on striving for greater social equality. “We need an economy where workers have more rights, contracts – an economy without monopolies,” he said. The Vetevendosje leader stated that no child should remain hungry under his governance, and that his government was committed to opening 160 kindergartens across the country.

Kurti’s new cabinet will be made up of 15 ministries, with Arben Vitia returning as health minister and Albulena Haxhiu as justice minister. Hajrulla Ceku will take over at the Ministry of Culture, Youth and Sport, while Xhelal Svecla will lead the interior ministry.

New LDK leader Lumir Abdixhiku also addressed the Assembly before the vote, asking Kurti not to let his overwhelming victory at the February 14 elections lead to him to “arrogance.”

“Kosovo needs stability,” Abdixhiku said. “As opposition we intend to contribute to this stability, but the new prime minister that will be elected today should remind himself that he is not only the head of his party but the prime minister of the Republic.”

PDK leader Enver Hoxhaj meanwhile criticised Kurti’s “unrealistic” wish list for his new government. “I did not see any concrete plans,” Hoxhaj said, citing a lack of detail relating to COVID-19 vaccines and the absence of any mention of the Association of Serb-Majority Municipalities.

PDK MP Bedri Hamza continued the criticism, claiming there was a huge discrepancy between the plan Kurti presented on Monday and that presented in February 2020. “Where is the military service? Where is the sovereign fund? Where is the fund for housing? Where is the bank for development?,” Hamza asked.

LDK’s Arben Gashi concurred, stating that “we saw a speech, not a political programme,” while AAK’s Besnik Tahiri stated that the prime minister’s approach was “arbitrary” and not what the country needs.

Kurti now embarks on his second spell as prime minister, having been removed from office through a motion of no confidence just 50 days into his first mandate.

One of his first challenges looks set to be appointing a new president, with Vetevendosje’s likely candidate Vjosa Osmani facing public opposition from both PDK and AAK.

According to the Kosovo Constitution, two thirds of MPs at the Kosovo Assembly are required to take part in the vote for president, meaning a united opposition could prevent any candidate from being elected, potentially leading to a dissolution of the parliament and yet more early elections.