Leading man: Alban Ukaj on being an actor in a post-Yugoslav space

PI caught up with Prishtina-born actor Alban Ukaj to talk about his home country, his life in Bosnia and Herzegovina, and his first Kosovar feature film.

I found Alban Ukaj sitting at a posh Arab hotel’s café along Sarajevo’s low, slow Miljacka River. Chain-smoking in a plain white undershirt, he looked the part of a disaffected actor on his day off.

Ukaj, originally from Prishtina, came to Sarajevo for the first time in 2001 to participate in the Sarajevo Film Festival. He was a student who spoke basic Bosnian/Serbian/Croatian, learned from his neighbors, pop songs, and of course, from the Serbian police that were omnipresent in the Kosovo of his youth. In Sarajevo, Ukaj got married and had a child, and has now lived in Bosnia’s capital for half of his life, acting in local theaters and on the silver screen in Bosnian and Albanian. He’s also been active in regional theatrical projects, like a traveling, bilingual version of “Romeo and Juliet,” in which the Montagues were played by Albanians and the Capulets by Serbs, and each actor spoke his or her native language. Ukaj, charming and handsome, was a natural Romeo.

A veteran of Bosnian and even Albanian film, he is making his debut as an actor in his first Kosovar film in 17 years. The film, “Martesa,” or, “The Marriage,” will premiere on November 28 at the Tallinn Film Festival. All Ukaj will say about the movie, director Blerta Zeqiri’s first feature-length film, is that it centers on a love triangle featuring Ukaj, Adriana Matoshi and Genc Salihu, and how their families react to it.

“Some of it takes place during the ‘90s, during the bombings, but most of it takes place in the present,” he says. “It also tackles the issue of homophobia. But let’s talk about that after the premiere,” he says. “I think the film is important for the whole region. It is a pity we still cannot talk in concrete detail on the topic, but I can say that it is one of the most honest movies made on this theme in the region.”

Ukaj is primarily a theater actor, but he is well known in the continental film world. He played an Albanian mafia man in “The Silence of Lorna,” a Belgian movie by the Dardenne Brothers. He also played a brooding northerner in “Bota,” which was Albania’s nomination to the Oscars in 2015. But “Martesa” is his first feature film shot in Kosovo since the war.

You’ve got this emotional memory. If you don’t remember things, your body remembers.

While he has also gotten used to acting in the language of his adopted country, Bosnia and Herzegovina, with “Martesa,” he has relished the opportunity to act in his native language and for a local audience.

“You’ve got this emotional memory,” he says, of acting in his native tongue. “If you don’t remember things, your body remembers. It was much easier for me because you’re not thinking about language, it just comes out.”

Acting in the film also brought back a lot of memories of Kosovo and Prishtina during the 1990s, since the film includes some scenes that took place in the recent past.

“I belong to the generation who I think build a new kind of identity in Kosovo,” he says. “Prishtina built its identity in the ‘90s through parallel institutions.”

While Prishtina’s identity is bound up in the resistance of ethnic Albanians during the 1980s and 1990s, Sarajevo’s identity was forged by the 1992-95 war in Bosnia, when the capital was under siege for 44 months, the longest in modern history. The city was known during Yugoslavia for its mixed marriages and bohemian, rock music scene, but it has changed since the war and continues searching for its identity, says Ukaj. Politically, the unwieldy bureaucratic ethnocracy set up by the Dayton Agreement has led to a stagnation that is also mirrored in the cultural sphere.

It is a very tricky thing, Sarajevo. It really gets you, but it only lasts 10 days and real life in Sarajevo is not like the festival.

None of this was apparent during Ukaj’s initial visit to the city, during the 2001 Sarajevo Film Festival, one of the region’s biggest annual cinematic events.

“It is a very tricky thing, Sarajevo. It really gets you, but it only lasts 10 days and real life in Sarajevo is not like the festival.”

What he has witnessed during his time is a gradual worsening of affairs, even as the temporal distance between the war and the present day grows.

“For the last two years, Sarajevo and Bosnia are in complete chaos. The system doesn’t function anymore. Three of four years ago I would have coffee with friends who wanted to emigrate, trying to change their minds. Then, I had arguments why it was better to stay. Today, I feel like I don’t anymore,” he says.

“Things are changing for the worse,” he adds, mentioning several protest movements in the last decade that have failed to bring about substantive change. 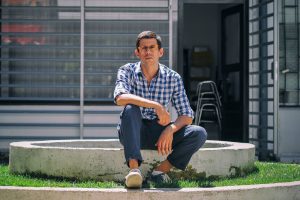 Protests in 2013 about the failure of the government to issue identification numbers and in 2014 about political corruption and incompetence ran out of steam and did not manage to result in major leadership changes.

“Lots of my friends are selling their houses. People are leaving, even in my profession, considering that it is hard to go abroad, and it is more complicated, since the main weapon in our profession is language.”

Ukaj’s choice of adopted country also makes it difficult for his parents and relatives to visit him in Sarajevo, or for his Bosnian wife and in-laws to travel to Kosovo. Bosnia’s smaller entity, Republika Srpska, has blocked the country from recognizing Kosovo. While Belgrade and Prishtina have eased barriers to travel between Kosovo and Serbia through EU mediation.

“Bosnia and Kosovo are the two countries in ex-Yu [former Yugoslavia] left with primitive, idiotic, old-fashioned ‘Balkanistic’ enmity,” he says. “For Bosnia, we [Kosovo] don’t exist.”

In order to bring his wife and son to Kosovo this summer, the family had to purchase visas worth 300 euros each – in Zagreb. The application process necessitated two trips to the Croatian capital to apply for the visas and then pick them up. Then, they needed to find a car which could drive into Kosovo, and purchase extra insurance.

“My wife and I went to New York City and had our wedding for less than it costs to visit Kosovo,” says Ukaj, frustrated. “The EU and regional leaders keep talking about economic exchange,” he says, referring to the “connectivity agenda” that is being pushed by the EU External Action Service.

“But no one is producing anything. What are they going to exchange? Potato chips?”

According to Ukaj, there are some 35,000 Albanians in Bosnia, most of whom emigrated during the Yugoslav times and stayed. They have families in Kosovo.

There is a barrier between Kosovo and every other country in the former Yugoslavia.

“We had a meeting in Sarajevo at the EU Summit in March with [former Kosovo] PM Mustafa – it is like ping pong. The Bosnian ministry of foreign affairs said that it is time to fix this. It still all depends on Belgrade. If it is the will of Belgrade, Bosnia could fix it.”

In Sarajevo, Yugo-nostalgia is still widespread. But not so for Ukaj, who is not complimentary about the collapsed country, chiefly because of its marginalization of Albanians.

“There is a barrier between Kosovo and every other country in the former Yugoslavia,” he says, referencing scholar Damir Arsenijevic’s text “Our Negroes, Our Enemies.” Even the name and the national anthem show clearly that the enterprise of joint living was primarily for Slavs, Ukaj says, with Albanians as second class citizens.

But it is hard to shake the feeling that his life would have been much easier during Yugoslavia, when Kosovo Albanians like actor Bekim Fehmiu and director Faruk Begolli (under whom Ukaj studied in Prishtina) made international careers. Ukaj has done this too, but in a post-conflict, underfunded landscape.

In Sarajevo, Ukaj is working with SARTR, the Sarajevo War Theater. His portrayal of Woland in “Master and Margarita” this year won him the best actor award at a festival in Jajce, a town in central Bosnia.

He is also working on a short film about a war crime that took place outside of Sarajevo, centered on the theme of what gets remembered and what is forgotten once the victors write history. But filmmaking has been hard in Bosnia in the last few years, with cultural budgets getting slashed and more restrictions placed on actors’ contracts to work only in a specific theater company.

In Kosovo, he says, the scene is booming.

“Kosovo is shooting five or six movies per year, while in Bosnia it is one or none now.”

Bosnian film director Jasmila Zbanic, who won a Golden Bear at the Berlinale for her 2006 film “Grbavica,” “is fighting like a raging bull to get funding for her movie about Srebrenica,” says Ukaj.

In Kosovo, says Ukaj, there is positive momentum. “[Director of Kosovo Cinematography Center] Arben [Zharku] is doing a very good job, what he did for Kosovo cinematography in the last five years. Who knew before about Kosovo movies? Now they are at Karlovy Vary, Sundance, and other big international festivals.”

Finally, something for the brooding actor to be excited about.

Enver Sekiraqa sent back to prison after brief house arrest