What makes a candidate electable?

With a corpus of poorly educated voters, the candidates for MP in the upcoming Kosovo elections focus predominantly on numbers: the numerical order of party lists impacts who is elected.

Throughout the election campaign, in addition to their names and surnames, MP candidates are also assigned a number by their party. After the first challenge of getting on the list, their next challenge is to get a number that is easily remembered. Such are one digit numbers, numbers like 40, 50, 60, 100, or repdigits (33, 55, 77, 99). But, how much does the number really affect the election? What makes an MP candidate electable if we base it only on the numerical order in the lists?

Is ranking in election lists important?

In the general election of 2010, Vetevendosje participated in electoral politics for the first time. Together with a coalition of smaller parties, the list was alphabetically ordered, according to the first letter of the candidate’s first name. As a consequence, eight of the thirteen MPs that managed to get in the Assembly from Vetevendosje’s lists had a name that begun with the letter A. The current Vetevendosje leader, Visar Ymeri, who was far down on the list, barely managed to get the sufficient votes to join the parliament. In the next parliamentary elections, Vetevendosje abandoned the use of alphabetical order.

Data show that the order of candidates in the list impacts the number of votes they get. If one analyzes election lists and how many votes candidates received from 2007 onwards, it is clear that candidates at the top of the list receive more votes than those in the middle or the bottom of the list. 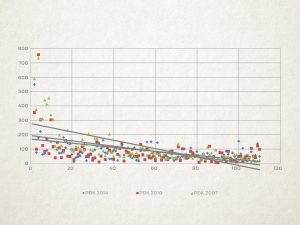 PDK candidate votes according go their order on the parliamentary election lists in 2007, 2010, and 2014.

An important factor here might also be that political parties tend to place the most active party members at the top of the list. 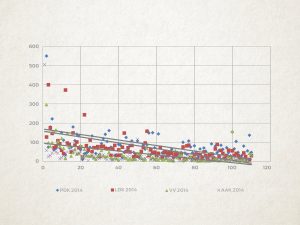 Votes for the four biggest parties for 2014.

But, the order on the list is not the only component that affects who can get elected. In the previous parliamentary elections, Skender Hyseni from the Democratic League of Kosovo, LDK, and Laura Kryeziu-Selimi from the Alliance for the Future of Kosovo, AAK, did not get enough votes to become MPs in spite of being in the top ten of their respective lists. On the other hand, Bekim Haxhiu from the Democratic Party of Kosovo, PDK, was ranked second to the last in the last two elections but received over 12 thousand votes on both occasions, enough to be elected to the Assembly.

How much does luck have to do with it?

Usually, parties compile the lists before the Central Elections Committee, CEC, assigns numbers to the parties. In every party, there is one candidate that has the same number as the party. In the past, this has helped a considerable number of candidates. In the elections of 2007, Gani Bucinca from PDK and Adem Hajdaraj from LDK received sufficient votes to get elected. Those two candidates shared their number with their respective parties, 71 and 89. In the last parliamentary elections, candidates who shared numbers with their parties were Njomza Emini from LDK (54), Bali Muharremaj from AAK (44) and Raif Qela from PDK (49). Will Driton Selmanaj from LDK, Ali Lajci from Vetevendosje and Teuta Haxhiu from PDK-AAK-Nisma benefit from this stroke of luck?

Is the region of origin important?

Despite the fact that Kosovo is considered as only one election zone and although parties compete for votes on a state level, nevertheless they still have a strong regional basis. It would be nothing new to say that PDK’s bastion of voters is in Drenica, AAK’s in Dukagjin, LDK’s  in Llap, and NISMA’s in Malisheva. Only Vetevendosje seems to not have its own bastion, although most of its votes come from the Prishtina region. Thus, a candidate from Podujeve would find it more difficult to win votes if they would run on the AAK list, rather than run as part of LDK. Similarly, an MP  candidate from Skenderaj would find it very difficult to win sufficient votes to become an MP if they rally behind LDK, compared to if they were to join the PDK list.

In which party do women candidates win more votes?

Since the first parliamentary elections in Kosovo, the 30 per cent quota for women’s representation in the parliament and on electoral lists has been applied. Political parties “respect” this criterion with accuracy, never giving women a single spot more than legally prescribed. But if you analyze election results, it seems that LDK voters have a tendency to vote for women candidates more than voters of other parties. In the 2010 parliamentary elections, amongst the nine women MPs from LDK, only two of them joined the parliament thanks to the quota – all the others won the required votes by themselves.

How much does changing the party affect votes?

With each new election cycle, there are always candidates that jump to a different party list from the one on which they started their political career. For example, in the last three elections, Zafir Berisha was an MP candidate for three different parties. The number of his votes however continuously dropped.

Most of those who changed their parties shared a similar fate. Hydajet Hyseni and Emrush Xhemajli, who switched from PDK to Vetevendosje, did not manage to amass enough votes to return to the Assembly as MPs. Similarly Haki Shatri and Melihate Termkolli suffered a great drop in votes after they moved from LDK to AAK.

Nevertheless, there are cases when a party switch does not translate into penalization via loss of votes for the candidates. Such an example is Ismail Kurteshi, who for a short while was a PDK MP in the third legislature, but then switched to Vetevendosje and was reelected twice as an MP afterwards.

How much do commissioners’ mistakes affect the vote?

While voter fraud for parties has visibly decreased, manipulation with the votes of specific MP candidates continues to be very high. The majority of ballots in which the voter did not circle the allotted number of the five candidates are ‘filled in’ by the commissioners, who circle the number of the MP candidate most known in that polling station.

Moreover, even if there would be no intentional manipulation with MP candidate votes, the procedures of manual counting result in many candidates losing votes and with many others winning. If there were to be a second vote count, I am sure that most MP candidates would get very different numbers from the votes written on the commissioners’ papers.

How will the coalitions affect the votes for MPs?

These are the first elections in which big parties entered into pre-election coalitions. This decision was most likely influenced greatly by the Constitutional Court’s interpretation after the 2014 parliamentary elections, according to which the party or the coalition that gets the most votes has the right to nominate the Assembly Speaker and the Prime Minister.

But in pre-electoral coalitions, there is always the possibility of small parties being hurt with votes. For example, from the pre-electoral coalition with PDK, AAK can be hurt the most. For 17 years, PDK and AAK have different voter bases. Although both parties come from ‘the war faction,’ both parties have different factions of voters in different regions. Considering that in big coalitions the number of votes needed for an MP to enter the Assembly increases visibly, AAK will most likely struggle to have the same number of MPs in the Assembly as in the previous two elections.

In the last parliamentary elections, Pal Lekaj was the third most voted MP in AAK with 8,481 votes, while with 8,500 votes had the 35th candidate on PDK’s list. Thus, in the 11 June elections, if AAK gathers the same votes that it did in 2014, there is a likelihood that only five MP candidates will get the mandate: the three in the top ten, the MP who shares the number with the coalition’s electoral number, and Daut Haradinaj, who has a strong voter base.

To escape such a scenario, AAK needs to work on voting in blocs, asking voters to vote five specific candidates in the bastions where they receive the most votes – in places like Decan, Gjakova, and Peja.

A similar fate could await AKR, which has entered a coalition with LDK. In the last parliamentary elections, in which AKR did not even cross the threshold to enter the parliament, the second most voted person was Ibrahim Makolli with 8,917 votes, while in LDK the person with the same amount of votes was 17th most voted. These elections could perhaps result  only with Behgjet Pacolli and Labinot Tahiri becoming MPs, thanks to being listed in the top ten first candidates.

But NISMA might not have this problem at all since it most of the NISMA members share the same electoral base as PDK.

How much influence does the education of voters have on the elections?

Many developing and undeveloped countries face the issue of uneducated voters. A large portion of voters in India, Brazil, Mozambique, and other countries are illiterate. These voters vote based on symbols of parties and pictures of candidates.

But when voters are irrational or uneducated, and when the candidacies are not based on principles and programs, then numbers play a great role in who becomes an MP and who remains only a candidate.