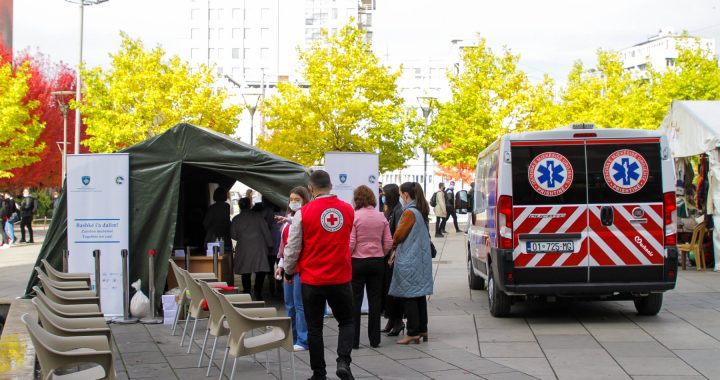 Use of vaccination tent is designed to help medical teams get closer to people who have resisted getting jabs so far.

Citizens of Prishtina started getting vaccinations against COVID-19 from mobile teams stationed in a square of the capital on Friday.

The decision to vaccinate people using mobile teams was made in order for the teams to get as close as possible to citizens who have not yet received a first dose.

Until Friday, citizens of Prishtina were only able to get vaccinated in the city’s “1 Tetori” vaccination center.

“Only the first dose will be administered in the tent set up in Zahir Pajaziti square; the second, due to technological equipment, will be given in the large vaccination center,” Bardhi said.

Bardhi stressed that use of mobile teams is expected to be extended to other municipalities from next week. According to him, wherever vaccination is being administered, mobile teams will also be sent.

The service cannot be obtained without a prior appointment, however.

Bardhi further emphasized that the moment the tent was set up, people showed interest in the way the process goes.

Based on the data of the Statistical Agency of Kosovo from 2020, it is estimated that some 1,798,188 people currently live in Kosovo.

Health authorities said they registered 18 new cases of coronavirus on Thursday, after testing 2,198 samples. No COVID-19 deaths were reported in the last 24 hours.

Health authorities said that on October 21, 23 people were cured of the coronavirus while 510 people are still active with COVID.