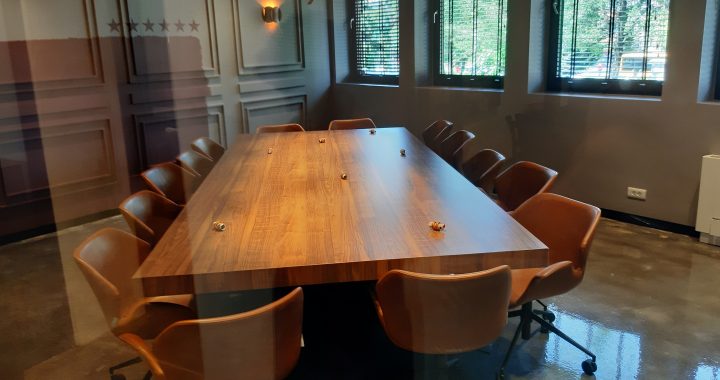 Fatmir Mustafa-Karllo sees art like a mosquito: you hear its buzz or feel it landing, then you try to slap it away. It’s already gone, but it leaves a mark.

His exhibition ‘Mosquito Vapor Trails,’ which opened on Friday in a new gallery space housed in the former Annex of the Radio Prishtina building, captures this instinctive feeling – once you’ve left the gallery space you’re not quite sure what you saw, but you want to talk about it, says Artrit Bytyci, the curator of Karllo’s exhibition at Paper Gallery.

“People come to see what he has done, and like a mosquito, it leaves an itch that later on you have to keep on scratching,” he says.

In the first installation of his three-piece exhibition, ‘Rapid Eye Movement,’ Karllo uses as his material chunks of asphalt from the Prishtina streets – layers of concrete from different eras of Kosovo history. By placing his canvas one one side of him and a pneumatic drill on the other, the dust particles from the asphalt flew onto the canvas as he drilled into it, creating dusty patterns across the canvas that aim to evoke both sombre and dreamy feelings.

“The creation of the hazy and dusty image reflects upon industrial ideas and processes that different regimes have used to sell the notion of progress,” Bytyci explains. “This canvas has asphalt from Yugoslav times, from the Republic of Kosovo, and whoever it was that got rich from the most recent tender to pave the roads. It makes you think about time and space through asphalt.”

For Karllo, each of the three pieces in his exhibition reflect trauma in different ways. The second, named ‘After the Stroke,’ is an axe placed on the floor in a small alcove along a narrow corridor, partly covered by shade and partly in light. The axe has been modified so that the handle has a recoil that one would pull to start the engine of a chainsaw.

According to Karllo, this represents both the tension between old values and new forms of art, and the trauma inherent in the creation of art that represents something new or different. “The process of invention is traumatic,” he says. “As an artist you must suffer a stroke, a shock, or some kind of trauma in order to create a new vision.”

The third piece is ‘Picnic,’ an installation which sees a boardroom table set up with what looks like napkins held together with napkin rings, ready for a family to enjoy a picnic. On closer inspection, these items are actually pretzels that have been stuffed full of money.

Behind a glass wall, ‘Picnic’ shows viewers that the money is on the table for those who have access, but the public are barred from entry. The audience is reflected on the glass – you look like you are part of the picnic, but in reality, you cannot sit at the table.

“The innocent notion of a picnic is redefined as a consumerist sport that co-opts nature for its own ends,” says Bytyci. “The infantile bliss of a picnic has been transmuted into a more traumatic and adult variant.”

Previously shown in other countries, ‘Picnic’ is a transportable installation that is site specific. Karllo can exhibit the work in Kosovo, where it will have one meaning for the audience, and then show it in Finland, where he lived for over a decade, and it will resonate with audiences differently.

This is a fundamental part of Karllo’s message. Where, and in what context, his artwork exists amplifies the effects of that art and the message that it sends.

“What better place to present these three artworks than in a space that itself is between two universes; a place that echoes the past of Radio Prishtina, but also the future, with Paper Communications,” says Bytyci. “Somewhere in the middle, stuck between these universes, is the exhibition.”

The director of the gallery is Gazmend Ejupi, who also teaches Art and Digital Media at the University of Business and Technology, which has campuses across Kosovo.

Ejupi tells Prishtina Insight that ‘Mosquito Vapor Trails’ is the second exhibition displayed at Paper Gallery, and that the gallery will be home to new exhibitions every couple of months over the next three years. The first exhibition, named ‘Dead Dogs Walking,’ explored technological developments through augmented reality.

Paper Gallery aims to present art that champions ideas over technique, Ejupi explains. “We want viewers to get lost in this space,” he says. “Our goal for these exhibitions is to make people think about art not in terms of beauty, but in terms of its importance, and how to get involved.”