As part of the Kosovo Architecture Festival, which kicked off on July 3, architect and curator Bika Rebek discusses her student workshop at the Kosovo Museum.

Although Kosovo’s National Museum holds around 50,000 artifacts from the Bronze Age to Kosovo’s recent history, very few items from its archives are usually on display. This is bound to change, as the museum’s revitalization – expected to conclude by February 2018 – is underway.

Housed in a distinguishable yellow Austro-Hungarian building constructed in the late 19th century, the museum also recently opened its doors to a group of students participating in the Kosovo Architecture Festival, a three-month event that will organize lectures, exhibitions, and workshops around Kosovo between July and October.

The students, led by New York based curator and architect Bika Rebek, spent four days imagining how the Kosovo Museum could be revitalized at the “Reimagining the Kosovo National Museum” workshop.

“The best thing about the workshop was that I had the chance to work with architecture students who were very enthusiastic and determined to find solutions. Almost all of them, when asked why they joined the workshop, answered that they came because they want to help their community,” said Rebek, who is an adjunct professor at the Columbia Graduate School of Architecture and also worked as a exhibition designer at the Metropolitan Museum of Art. “This is something to appreciate.”

Around 20 architecture students participated in the onsite workshop. For four days they discussed ideas and came up with detailed plans, rethinking and reimagining the museum space. 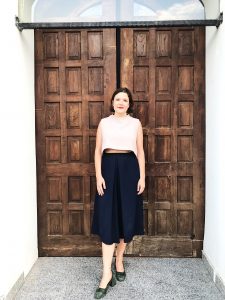 I hoped to hear more about the artifacts and the Museum’s collection, but neither Rebek nor her students had access to it.

“It could have helped if we had access to all of the collection because it would be good to know more about the artifacts and to imagine a space where they could be presented best,” commented Rebek, adding that instead, the workshop focused mainly on the space itself.

The students brainstormed about what the role of the museum was and what it should represent. They concluded that the museum should primarily respect and present tradition but also be open to the new.

“For example, I am very fascinated by the traditional Albanian table – the sofra,” explained Rebek, referring to the low table, which requires diners to sit cross-legged on the floor.

“[This] creates a certain proximity among the people who sit together. I could easily see how the sofra can be presented in a space in a more contemporary way – by also keeping its authenticity,” explained Rebek.

The students and Rebek concluded that the museum should be inclusive and welcoming to everybody, and should support a wide ranging program. They also suggested that the Museum’s trademark yellow facade be traded in for pastel pink and white hues.

The group divided the museum in four main segments – Garden, Cafe, Action Areas and Galleries – and included proposals on how to design each of the spaces.

The students envisioned a transformation of the former Turkish and Yugoslav barrack, which also served as an office for the European Agency for Reconstruction in the early 2000s, into an open space with greenery.

“The museum should be open and welcoming for everybody. It should be a place in the city where people love to go and spend time,” said Rebek, showing me the plans designed during the workshop. 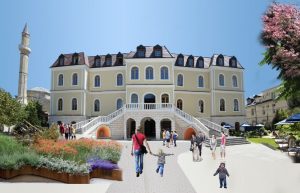 The project proposal of Rebek’s workshop.

Inspired by the Museumsquartier in Vienna, the students proposed a lush green garden with modern benches and stairs where people can sit and rest, while on the inside, a cafe is accompanied by a shop where one can buy museum publications and merchandise.

The participants also proposed to tear down the wall surrounding the museum and replace it with plants and trees.

“Actually, our proposal to remove the wall produced a heated discussion, not only among the students but also among the museum staff and management,” said Rebek, smiling. “Many were not convinced of this solution, stating security issues [as a reason against].

The workshop also emphasized the need for the museum to be accessible to all.

“It should be a place where a lot of events happen, like temporary exhibitions, educational and interactive games, different screenings, archeological excavations, mosaic and drawing workshops, and so on,” said Rebek.

Meanwhile, the proposal foresees that the galleries should be organized to tell an engaging narrative. The students suggested maximizing the natural light in the gallery and creating smart solutions for individual display of the artifacts.

Rebek hopes that the museum curators will take their proposal into consideration when they open the museum next year, but she is aware of the challenges the museum faces.

“I understand that the Museum faces a lot of barriers and that the normal functioning of it is prohibited by a lot of factors – especially considering the fact that most of the valuable artifacts are currently not in the Museum,” said Rebek, referring to 1,247 artefacts sent to Belgrade, Serbia during the Kosovo War. The artifacts have not been returned yet, despite calls for the issue to be included in the Brussels-facilitated dialogue between the two countries.

“I really enjoyed the energy of the students, who showed critical thinking and thought of creative solutions. I also really loved that a lot of debate was going on among all the parties involved, people were seriously thinking about all the different ideas presented,” concluded Rebek enthusiastically.

Meanwhile the Museum’s director, Skender Boshtrakaj, said that it was great to see how young architecture students think about the space.

“We met them with a few of my colleagues to see how the young students think. I’m very open to infuse something youthful,” said Boshtrakaj, who was pleased to see their proposal which “is not to be ignored, nor exaggerated either.”

“The most important thing is to open the institution, to hear what people think,” he concluded.

RECOM looks at Trieste Summit to end its 'coma'

by Mia Marzotto
Next: News