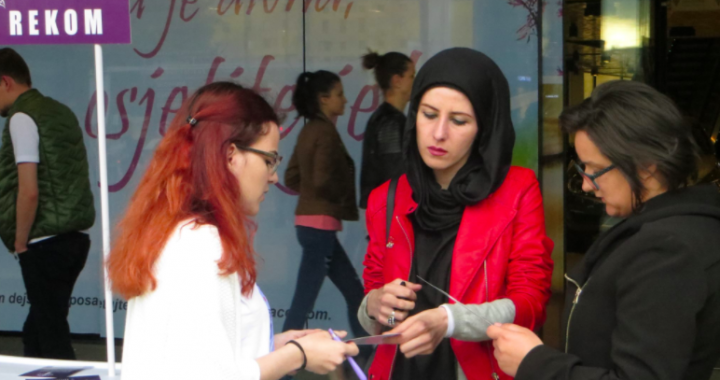 RECOM looks at Trieste Summit to end its ‘coma’

Human rights activists struggle to reignite the regional initiative for a reconciliation commission for the former Yugoslavia as Balkan leaders meet at an annual EU-hosted summit.

In light of the upcoming fourth Western Balkans Summit, human rights activists have given new impulse to the RECOM coalition by gathering thousands of signatures from citizens across the region to make reconciliation a top priority.

If adopted, the Regional Commission for Establishing the Facts about War Crimes and Other Gross Violations of Human Rights Committed on the Territory of the Former Yugoslavia, RECOM, would become the only intergovernmental body for reconciliation officially recognized by all of the seven former Yugoslav states.

Western Balkan leaders and EU representatives will meet in Trieste on July 12 as part of the Berlin Process, an EU-enlargement initiative for Balkan states encouraging collaboration on development, rule of law, and bilateral disputes.

The relaunch of the RECOM coalition coincides with the Trieste summit because the coalition is demanding for previous commitments to be upheld, particularly last year’s Paris Summit conclusions, which state that “reconciliation is essential for the stability of the region on its path to the EU.”

“We see the creation of this crucial commission for the promotion of justice and reconciliation in the Balkans as an integral part of the Berlin Process,” Teuta Hoxha, Executive Director at Youth Initiative for Human Rights Kosovo, told Prishtina Insight.

The coalition is attempting to replicate the successful strategy adopted by regional youth groups for the establishment of the Regional Youth Cooperation Office of the Western Balkans, RYCO, which was agreed upon during the 2016 Paris Summit and became fully operational earlier this month, explained Hoxha.

The RECOM project dates back to 2004-2005 when it was established with the support of the international donor community. Local civil society groups welcomed the initiative as well, with 2,115 regional organizations soon joining the coalition.

The massive consultation process that took place between 2006-2011 epitomized the bottom-up character of the initiative, which became the largest civil society movement for reconciliation in the former Yugoslavia.

In 2011, 550,000 citizens across the region signed a petition demanding that Balkan states establish an interstate commission. Then began the delicate phase of negotiation with the regional governments. However, the coalition’s call has so far received little attention from the governments.

Last May, coalition members decided to bring the initiative back into the public eye and, in the course of just a few days, collected 50,000 signatures, confirming people’s desire for an accurate and comprehensive account of the past.

“The fact that this year we were able to collect more than 11,000 signatures only in Kosovo shows that there is still awareness and widespread support for RECOM,” said Hoxha. “Our leaders must understand this.”

No serious attempts have been made by regional leaders to commonly deal with past crimes or to build a historical understanding of what occurred. Meanwhile, national initiatives have emerged that have done little, if anything, to realize the right of all victims and their families to truth, justice, and reparation.

The latest example of this is the proposed Commission for Truth and Reconciliation in Kosovo, set in motion by Kosovo President Hashim Thaci earlier this year, which many greeted with skepticism given the failure of similar commissions elsewhere in the region.

RECOM coalition members argue that only an official acknowledgement of war-related crimes through a regional commission can fully restore the dignity of all victims and promote reconciliation.

“Through the work of the coalition, we have been able to bring people from different ethnicities across the region around the same table and agree on how a regional truth commission should look in order to produce a shared official narrative about the past,” Bekim Blakaj, Executive Director of Humanitarian Law Center Kosovo, told Prishtina Insight.

A major achievement of the coalition has been the documentation of all alleged war crimes and human rights abuses committed during the wars of the 1990s, Blakaj said. For example, the Kosovo Memory Book constitutes the most comprehensive effort to document human casualties during the Kosovo War.

However, the initiative for RECOM appears to have virtually stalled in recent years, making the establishment of the commission seem further away than ever before.

In Kosovo, almost all 404 coalition members joined the initiative before 2011, and only two organizations have joined since.

This might have more to do with the current political climate than with a lack of commitment by civil society organizations, argues Kushtrim Koliqi, Executive Director at NGO Integra.

“When the RECOM [coalition] was launched, it was the top story of the Balkans and we gave it all our energy. But now the context and circumstances are different, and as civil society I think there is little we can still do to promote the commission without political allies,” Koliqi said.

Koliqi also explained that the coalition supports Thaci’s proposed reconciliation commission, since it is not necessarily incompatible with a regional approach to truth-telling. Yet, he said, a regional approach is also necessary because the conflict left many victims, perpetrators, and witnesses on different sides of national borders.

“Today, RECOM is in a coma. As civil society, we still believe in the idea of RECOM and we need to keep it alive, get creative in finding opportunities to not let the idea die,” Koliqi said.

RECOM sees the Trieste Summit as a window of opportunity to urge the region’s leaders to take prompt action for the initiative.

A delegation of RECOM coalition members, headed by Humanitarian Law Center’s founder Natasa Kandic, will attend the parallel Civil Society Forum, held in Trieste during the Summit, to push for the commission to become an official part of the Berlin Process.

“Without accountability for the past, there cannot be a peaceful and prosperous European future for Kosovo and the other Balkan countries, and all stakeholders would be making a big mistake to underestimate the importance of dealing with the past,” Blakaj warned.