Our memory – our responsibility

17 years after the war, Kosovo’s institutions continue to fail at addressing the issue of Kosovo’s around 1,600 missing persons, leaving loved ones with empty promises and inadequate commemoration.

Edita Tahiri, who leads Kosovo’s delegation in the on-going dialogue with Serbia, recently  told the Parliamentary Commission for Public Administration, Local Government and Media that neither country has a list of missing persons from the Kosovo war.

“We talked a round of talks, and the EU told us, ‘next time you need to have with you the list of the missing in your countries and we will continue in the next round when you have the list.’ None of the parties compiled any list,” she said.

She later denied this statement, saying that she was misunderstood and that she was referring to a list of the locations of the missing, a contradictory statement in and of itself. Misunderstanding or not, this string of statements reopened the debate on missing persons and highlighted a major complaint of organizations that deal with the rights of families of missing persons: that institutions are not concerned about their fates.

For almost 18 years after the war, Kosovo institutions were not able to at least erect a collective memorial for the civilian victims of the Kosovo war. They managed to do so for the Kosovo Liberation Army soldiers and commanders, however. I remember when the relatives of the disappeared accepted the request for removing the pictures of their missing family members from the railing of the assembly building because, according to the government, they had found a way to commemorate the disappeared. It turned out to be a projector screen that was supposed to display the pictures and names of the disappeared, but was never functionalized for that purpose. Due to this negligence, the family members once again decided to put up the pictures outside the assembly, only to agree to a second removal and make make way for the government’s next initiative. This time, they erected a blank marble memorial, nothing more. A white rock with no inscriptions and no information as to who made it and to whom it is dedicated. Most citizens are not aware that there is a memorial for the disappeared near the assembly building, and I am convinced that that was not clear even to the people who placed flowers at the inauguration of the memorial. There were flowers dedicated “to those who perished for freedom,” despite the fact that this memorial is dedicated to the disappeared, whose status remains unclear unless they are found or the family members do not decide otherwise.

Interviewed citizens did not have the slightest idea what the memorial was and were unaware of its existence, despite the fact that they were standing right next to it. Our activists took the initiative and placed a plaque inscribed “This memorial is dedicated to all missing persons from the last war in Kosovo” in five languages: Albanian, Serbian, Romani (the first time that the loss of members from the Roma community was recognized), Turkish, and English. To our surprise, the plaque is still intact, and we believe that the people do not know that it is an intervention to complement the unfinished memorial. 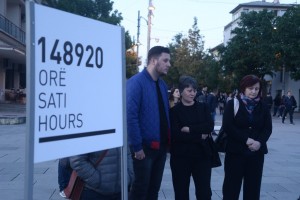 Vjollca and Gramos Berisha travel from Suhareka to Prishtina every time someone commemorates the disappeared. | Photo courtesy of YIHR.

Despite our requests to have institutional representatives participate in our activities, to honor and express readiness for solving the issue of the disappeared, we have not always achieved that. The family members of the disappeared always respond positively to our invitations and feel a little relieved knowing that they are not alone in their legitimate requests.

Uncle Syla from Peja, holding a picture of his daughter Magribe, came and stood near the wall inscribed with the names of the disappeared that we put up. In 2011 YIHR KS erected a white  20-meter-long wall in the city centre, at the ‘Zahir Pajaziti’ square, to mark the national day of missing persons. The wall had names of all the missing people in Kosovo–at the time there were 1819 of them–and it was the first time in our society that citizens saw names of persons from all communities in one place. Hence, this was the first “memorial” to remember all missing people in an inclusive way.

We were saddened to hear that Uncle Syla’s wife, Magribe’s mother, Myzafere died this year and never received any news about the fate of her daughter.

There are many other family members of all ethnic groups in Kosovo that participate in our activities.

Paradoxically, those who were able to testify at a trial for war crimes are considered lucky, as opposed to others who still seek find answers about their loved ones.

Unfortunately, all of this happens beyond the scope of the institutions. I would not be surprised if our institutions actually do not have a list of the disappeared, which we get from the International Committee of the Red Cross, ICRC, every year. Despite the fact that this information is very easily accessible, I am angered that this issue is not prioritized. In August, our activists sent a letter and the list of the disappeared to Prime Minister Isa Mustafa, but the government did not comment on the action. Our representatives were not able to include this issue on the agenda of any of the rounds of dialogue between Kosovo and Serbia, despite having promised to do so, most recently, a year ago. These seem to be empty promises. The requests of the family members and society have been neglected in these talks and agreements.

According to ICRC statistics, the ex-Yugoslav wars led to 32,883 disappearances, 12,000 of which are yet unsolved. In Kosovo, there are 1,600 missing persons from all ethnic communities. For 17 years, their families have been subject to promises, but they are only mentioned in speeches at symposiums around the world. The numbers of the casualties, disappearances and rape have occasionally been manipulated because our institutions left that in the hands of NGOs, thus it is not surprising that institutional representatives become part of misunderstandings, like in the case of Sejdi Thaci, who was reported to have been one of the missing people from the war and returned to Klina alive. Both the media and institutions raised the hopes of families of missing people by not clarifying the case and the facts, misleading them into believing that those who have disappeared 17 years ago might one day return, unscathed.

Admittedly, NGOs are there to fill the gaps left behind by the institutions, but it is the state’s job to assume a proactive role in cases such as the disappearances, it is the institutions who need to be aware that Magribe’s mother died without being enlightened about her daughter’s fate, and lived a waking nightmare waiting for help and information. Thousands of families are hostage to the institutions’ lack of work. This kind of pain is felt across all communities in Kosovo who still have missing family members. Our activists will always be with them, and we will continue call on the government to fulfill its promises.

Teuta Hoxha is acting director of the Youth Initiative of Human Rights in Kosovo.

A criticism of Andrea Capussela’s take on Trepca

by Muhamet Mustafa
Next: Opinion

How much would a free trade agreement with Turkey cost Kosovo?