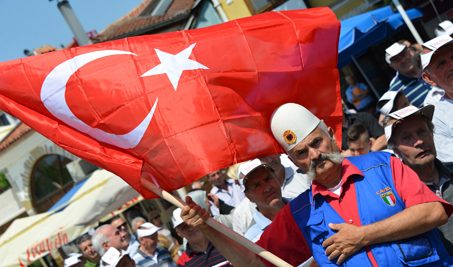 How much would a free trade agreement with Turkey cost Kosovo?

A free trade agreement with Turkey, the third largest exporter to Kosovo, just after the SAA could be a fatal blow  to Kosovo's budget and economy.

In 2013, the Ministry of Trade and Industry led by Mimoza Kusari-Lila, Gjakova’s current mayor, signed a free trade agreement with Turkey. According to the agreement, the two countries would gradually eliminate custom tariffs for various agricultural and industrial products, “with the aim of strengthening the economic cooperation between the parties and increasing the standard of living for the peoples of the two countries.”

The agreement has not yet come into force. Last week, during Kosovo Trade Minister Hykmete Bajrami’s visit to Turkey, the issue of the free trade agreement was discussed once again. Turkey’s Economy Minister Nihat Zeybekci declared that with the signing of the free trade agreement, there would be an increase of interest of Turkish companies about Kosovo. Mrs. Bajrami stated that there are already about 700 Turkish businesses registered in Kosovo.

While the registration of foreign companies in Kosovo, whether Turkish or otherwise, is the right step towards economic development, should the free trade agreement with Turkey be signed? What can Kosovo benefit or lose from it?

Kosovo’s annual trade deficit with Turkey is over 250 million euros. In 2015, imports from Turkey reached the amount of 259.6 million euros, while Kosovo’s exports to Turkey amounted to only 9.2 million euros. Kosovo mainly imports food and textiles from Turkey, but it is the third biggest exporter to Kosovo, after Germany and Serbia.

Turkey has signed free trade agreements with all the countries in the region: Albania, Macedonia, Serbia and Montenegro. In structure and content, these agreements are almost identical. The only thing that differs is the list of products exempt from customs and the timeframe for when custom tariffs will be removed entirely. After the signing of the free trade agreements, Turkey’s exports to the signing countries increased by 551 per cent, while the exports of these countries to Turkey increased by 280 per cent.

Although Turkey has an overall trade deficit, it has a visible trade surplus with the free trade treaty signing countries, meaning that Turkey is the greatest beneficiary of the free trade agreements. Naturally, since Turkey experienced an economic boom after 2000, the increase in exports cannot be considered only a consequence of the agreements. Yet, the agreements have boosted exports, especially when one considers that the increase in trade with partnering countries was bigger than trade with countries who have not signed such agreements.

Since the European Union countries and all the regional countries have signed free trade agreements with Turkey, it can be safely assumed that Kosovo will be obligated to sign such an agreement through international pressure. Yet, Kosovo’s budget would be damaged the most from such an agreement because Kosovo has the highest trade deficit when compared to all regional countries, and to a great extent Kosovo’s budget depends from import. Thus, the enforcement of this agreement must be delayed for a period of five to seven years, and its implementation must be gradual, protecting domestic products.

If the free trade agreement with Turkey would come into power soon after the Stabilization Association Agreement with the EU, this would create a huge gap in Kosovo’s budget revenue. Revenue from import taxes from Turkish products in 2015 was about 20 million euros. If the free trade agreement would be implemented immediately and in radically so, Kosovo would lose at least 20 million euros per year. If you add to this the 70 million euros lost from the Stabilization and Association Agreement, or SAA, signed between Kosovo and the EU in October 2015, a budgetary gap of 90 million euros would be unmanageable for Kosovo’s budget and economy in general. From both agreements, in the period 2016 to 2024, Kosovo budget will lose in total 520 million euros.

Another issue is the nature of the Turkish imports, which are competing with industries in which domestic production is blooming. While food products are the main import from Turkey, this industry is one of the rare cases that to an extent has achieved competitive parity with imported products, and even manages to export abroad. The same goes for domestic producers of furniture, one of the sectors that employs the largest number of people in Kosovo, which will have to compete with more Turkish imports.

The fact that the free trade agreement with Turkey has not yet come into power could have been a decisive factor in bringing Turkish investors to Kosovo. Kosovo has twice the number of Turkish businesses in comparison to Albania, although the latter has a larger and more attractive market for investors.Thus, Kosovo needs to focus in attracting investors from Turkey and other countries, rather than simply focus on signing free trade agreements, which will damage local producers and create budgetary losses. Such a boost to the local industry and job market could happen by exempting every custom tariff for raw material, which would encourage final products to be made in Kosovo and turn the locals into producers, and not just consumers.