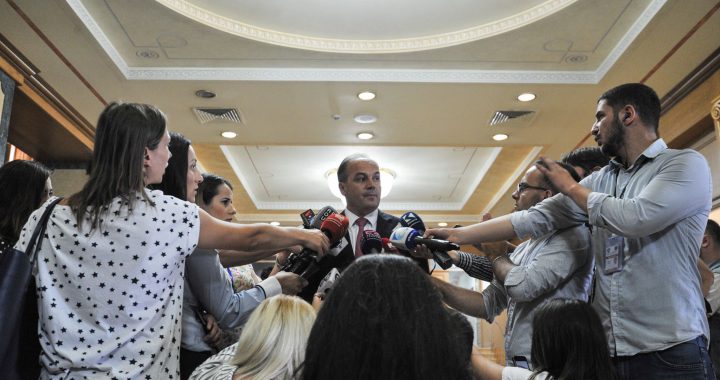 Two 2014 Constitutional Court decisions brought about a deepening political crisis in Kosovo. Putting PAN in opposition is the best way out.

When we were children, we all detested the kid who, having lost the game, grabbed the ball and took it home.

The similarity between the sore loser and current events in Kosovo scarcely needs explaining; as Kosovo’s parliament is unwilling to for vote their candidates for assembly speaker and prime minister, PAN are stopping parliament from doing anything.

The key difference here is that the kid owned the ball. PAN cannot claim, in legal terms at least,  to “own” Kosovo’s political system. Of course, the root of the current impasse does derive from a legal source, namely the now infamous ruling of Kosovo’s Constitutional Court in 2014.  One of us discussed this matter three years ago,  and another illustrated the absurdity of the ruling a few days ago.

In short, PAN is currently invoking both a law and the common interpretation of it. The first is fundamentally flawed, the second wrong.

Article 67.2 of Kosovo’s constitution reads: ‘The President of the Assembly is proposed by the largest parliamentary group and is elected by a majority vote of all deputies of the Assembly.’

This is clearly an unnecessary statement because if a majority is needed to appoint the speaker, why restrict the power to propose a speaker to the largest group? If this group has the majority, it will have its candidate appointed no matter how many other candidates are put forward. If this group does not have the majority, but formed a coalition that has, the same reasoning applies. If it does not have the majority, and failed to form a coalition that has achieved it, it will not have its candidate elected precisely because it lacks a majority.

It is fundamentally flawed because, with respect to this last situation, it is the perfect definition of a stalemate: someone has the exclusive right to propose something, and someone else has the power to block that thing. Unless one of the two blinks there is an impasse.

What’s worse, it could potentially be an eternal impasse, for, unlike other articles of the constitution, this one offers no way out in the event of an impasse; by contrast, in the case of the election of the prime minister, Article 95 says that after two failed votes the assembly is dissolved and early elections held.

It would be relatively easy to rectify this; it would be enough to interpret the words ‘the largest parliamentary group’ as meaning ‘whatever group or coalition has, at the time the speaker is to be appointed, the majority of the votes’. Then, no stalemate is possible.

In 2014 this precise question – “what does the expression ‘the largest parliamentary group’ mean?” – was put to the Constitutional Court. But as the Court was a political instrument in the hands of both PDK and the main Western embassies, it gave a flawed answer. The court ruled that it means the party, or formal grouping of parties which formed a winning coalition prior to the elections. The ruling thus bizarrely prevented post-electoral coalitions from constituting ‘the largest parliamentary group’. In 2014 that meant PDK benefitted. Today it means PAN does. This is why PDK-PAN can now take the ball home with them.

This is a profoundly serious situation: the outcome of the current political machinations threatens the political stability of Kosovo. Given the pervasive societal disquiet at the high levels of unemployment, the widespread corruption, the receding chances of EU-membership and Kosovo’s perennial contested international status, it is stating the obvious to note that Kosovo can ill-afford a prolonged period of political stagnation.

If history is a guide, and if rumors are to be believed, then the most likely outcome is that PAN, perhaps with the help of certain influential foreign embassies, ‘convince’ a number of MPs to switch sides. PAN have had two months to exercise leverage, however, and the statement by the Quint on Sunday was somewhat equivocal, though the sentence “deputies elected to the Kosovo Assembly should attend Assembly sessions and allow its work to begin” could be interpreted as a veiled criticism of PAN. Nonetheless, PAN’s willingness to jeopardize Kosovo’s stability in their determination to assume power, and the instinctive, albeit waning, distrust amongst the embassies of Vetevendosje, may make this the most likely outcome.

If this were to happen, Kosovo would finally have a functioning government, but at what price? Any PAN government would by definition comprise a motley mix of the PDK, AAK, NISMA, the Serb List and those MPs that had been bribed and/or bullied into supporting them. This can hardly be said to constitute a stable coalition. Additionally, what message would this send? The public mood in Kosovo has steadily degenerated since independence and thus the continuation of the political status quo – won through bull-headed intransigence – will surely stoke further resentment and despair. At the international level, Kosovo has increasingly come to be seen as a dysfunctional state run by a corrupt elite; the ascension of PAN would do nothing to dispel this.

Future discord for Kosovo could be avoided if logic were to prevail; the single largest party after the last election is Vetevendosje, and a truly democratic system would allow them to try to form a coalition that would, at the very least, suggest that Kosovo’s political system facilitates change, and is not just another semi-authoritarian plutocracy.

Andrea Lorenzo Capussela is the author of “State-building in Kosovo: Democracy, corruption and the EU in the Balkans”.

Dr. Aidan Hehir is a Reader (Associate Professor) in international relations at the University of Westminster (UK).

Shpend Kursani is a PhD researcher in the Department of Social and Political Sciences at the European University Institute.