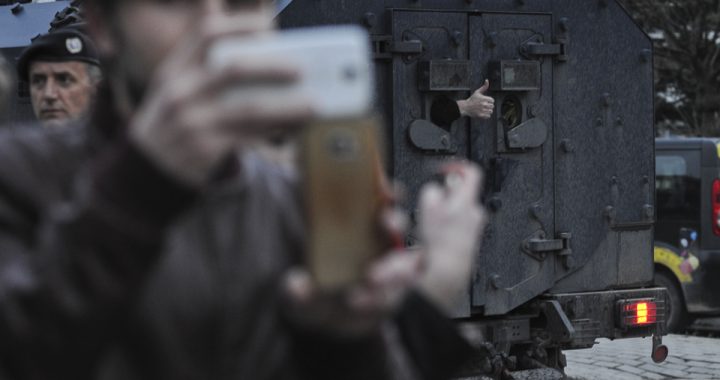 The panic Serbia and Kosovo leave in their wake

Marko Djuric is in Belgrade, the special police units withdrew from the north, and presidents Vucic and Thaci are asking everyone stay calm. Meanwhile, we the common people, deal with the panic they created.

The disturbing events around the arrest and deportation of Marko Djuric from Kosovo last week lead us in the north to question if there will ever be peace here. Such events shake the very foundations of our daily lives, and make us wonder – who can we blame for our state of constant fear and panic?

We have seen similar events many times before. March 26 reminded us of the “patriotic” train episode of early 2017, and of the wall in 2016. The Kosovo Serbs were yet again clueless that they lived in a state of panic until someone from Serbian national television read the news about tensions and panic in northern Kosovo.

While the Serbs from the north try to have a normal daily life, someone benefits from a different state of affairs. Once you have people who live in a constant state of fear and panic, they are easily manageable and manipulated. The question is how much people are prepared to endure.

Although this was not the first time that Marko Djuric, director of Serbia’s office for Kosovo, entered the territory of Kosovo illegally, it could have been assumed that an arrest would probably be Kosovo’s first response. However, it seems that neither Marko Djuric nor the government of Serbia expected an arrest. Or so it would appear.

According to the Agreement on Official Visits, signed by Kosovo and Serbia in Brussels in 2014, high representatives of Serbia must have permission to enter Kosovo, and this permission must be issued by the Kosovo institutions. There are clear instructions as to how to implement and respect the process. This time, Marko Djuric was denied entry to Kosovo. In response, Djuric entered Kosovo not by using one of the administrative crossings, but rather, alternative unpatrolled routes that connect Kosovo and Serbia.

While the media kept raising tensions through news about the panic among Kosovo Serbs, the President of Serbia convened an urgent session of the National Security Council regarding the situation in Kosovo. Serbs’ main reaction was along the lines of “We did not even know were panicking until they told us on TV.” That’s how it usually is. Others decide whether we are panicking or not. It is the media which told us that there was panic, laying the groundwork in preparation of what was to come.

While Djuric attended a meeting as part of the internal dialogue of Serbia on Kosovo, Kosovo police  special units entered northern Kosovo with the aim of arresting Djuric on the grounds of illegal entry. Special unit members used force, stun grenades, and teargas, resulting in 32 people being injured during the arrest. This is not where the brutality of Kosovo officers ends. After Djuric was arrested, he was taken into custody in Prishtina, where he was taken out of the police vehicle, a few meters away from the police HQ entrance and paraded through one of Pristina’s main streets. As he walked, head bowed, he was booed. Journalists took photos and videos. Panic ensued. The same panic that had been announced and broadcast on Serbia media for hours beforehand.

Both sides, Serbia and Kosovo, ought to be asked why this whole ordeal occured. Here are a few questions to the Serbian side: if you knew what was to follow, why did you make an illegal entry? If you knew about the consequences this whole thing might have, and you certainly did, why do you ruin what little peace we have? And here to the Kosovo side: couldn’t this have been done differently? Did the special units have to come to the north? Did this much force have to be used, all these stun grenades, and parading Djuric for public shame in Prishtina?

None of this had to happen. Our politicians on both sides, unfortunately, instead of keeping in mind the likely effects on ordinary people, prefer to show off their force and to display ownership of Kosovo. The governments were trying to show that no one can forbid Djuric to enter Kosovo, but also that no one can forbid Kosovo police special units from entering the north. That is how  ordinary citizens are hurt.

It seems that every time the Serbian government tries to do something for Kosovo Serbs, it is those exact Serbs who get hurt. When they sent us the train, special police intervention followed. Now that Marko Djuric had illegally entered Kosovo, the special units  again returned to the north. Along with heavy criticism of how the special units acted in Mitrovica, the question remains whether special units had ever intervened in the north for reasons other than Serbia’s actions. We all know the answer: no.

All of this could have been done differently on March 26 and all those years behind us. Once you have people which constantly live in a state of panic and fear, you will easily manipulate them and their actions. Kosovo Serbs have been, for years now, these aforementioned puppets. I cannot remember when was the last time we lived in peace, not asking what will happen tomorrow, free from fear. March 26 once again shook us with the same intensity as the murder of Oliver Ivanovic, preparation of the wall in Mitrovica, the train, the placement of barricades, as well as daily disturbances of our lives by politicians for whom, apparently, we are nothing more than a stage for games and competition.

At the end of the day, Marko Djuric went back to Belgrade with a rehabilitated image; the Kosovo police special units withdrew from the north, and Vucic and Thaci are asking everyone to calm down the situation. Where are the regular people in all of this? They are left in a state of panic and fear, created by the same politicians. This panic and fear were not as pervasive as it became once Djuric illegally entered Kosovo and until the special units intervened. They left it in their wake. After their departure from the stage and their retreat, all that is left is us, living in fear and anxiety of what they might bring us next.