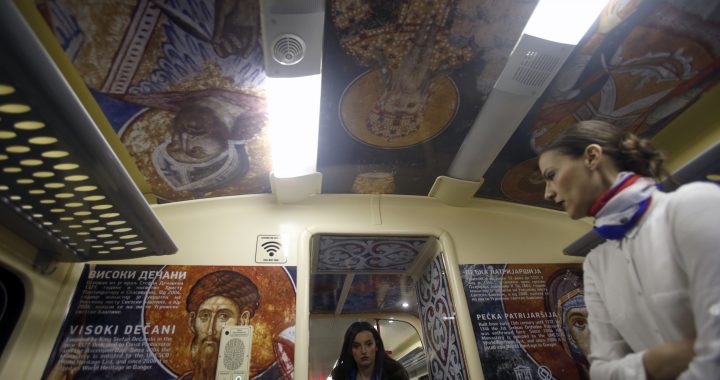 A train hostess stands in a train carriage decorated with the iconic figures as it departs from Belgrade to Mitrovica, Kosovo at Belgrade's railway station, Serbia, Saturday, Jan. 14, 2017. | Photo: Darko Vojinovic, Beta

While we are facing much bigger problems, our politicians send us trains. Rather than making it easier for us, they just make our situation more difficult.

Orthodox New Year’s Eve has always been a great cause for celebration on the territory of Serbia. That’s us, cheerful people, always celebrations and festivities. It is enough for us. For this January 14, the Serbian government announced an additional reason for celebration. In fact, today we expected, after 18 years of interruption, the reconnection of the railway link between Belgrade to Kosovska Mitrovica. It will be “no ordinary train” and it will not stop “at every bridge,” they say.

Honestly, at first glance it did not seem like anything bad. There is regularly car traffic on the route Kraljevo-Zvecan, there is a train and the bus lines to Belgrade are very frequent and even on a daily basis. If we consider that trains are cheaper, this undertaking would not be so bad. Except maybe the train would be a couple of hours slower, but at least it’s a moneysaver. And then we finally waited to see the long-awaited Russian train that will connect us with Belgrade. And we saw it. And no, we are not thrilled. And no, we’re not proud. I have the impression that out of some holy things we are creating a comedy. Or we are deliberately laughing at ourselves. Spooky.

From what we were able to see and according to media reports, the inside of the train is filled with Orthodox icons. Everywhere and on all sides. The first question is, who was so brilliant to decide that in a mode of transport, which they say connects two cities in Serbia, to put icons? And not one, but a lot of them. To make matters worse, the exterior of the train – oh, it is no “ordinary” train. The exterior of the train is decked out in Serbian flags and slogans saying “Kosovo is Serbia.” And from what we saw in the photos the inscriptions are in different languages. For one of these inscriptions, I hope that it is written in another language rather than a grammatical error in an attempt to impose the fact that Kosovo is Serbian. It is clear to us all that this is far from connecting the two cities. This is far from doing services for the population and assisting with transport. This is called provocation. Horribly packaged provocation.

“Kosovo is Serbia” you say? How is it, then, that the President of Serbia failed to reach “our” territory for the celebration of Christmas? How is it that he needed permission? And how is it that Serbian books cannot enter the territory of Kosovo? And finally, how is it that the pharmacies in the area of the Serbian population are empty? Is the answer “Kosovo is Serbia”? I do not think so. While we welcome the new year with Orthodox icons on trains and patriotic slogans, a response arrived from Prishtina that this procedure is illegal. And while we write about Serbian Kosovo in a host of different languages, here is another conflict for us. Because of course you can expect a reaction to this. I’m afraid that it will not be pretty and pleasant. And, of course, it will affect the ordinary people. As it has until now.

While we are facing much bigger problems, our politicians send trains. Rather than make things easier for us, they just make the situation more difficult. Wouldn’t it be nice to get a normal, ordinary train, which runs on this route, which is cheaper than the bus and thus helps the local population? But no, this train “is no ordinary train.” We can just be usual and normal. Instead of tackling serious problems, we are mired in banalities. Bread and circuses, as they say. Or we can say no problem, train and circus.

This article was originally published in Albanian and Serbian on the website new-perspektiva.com on January 14.