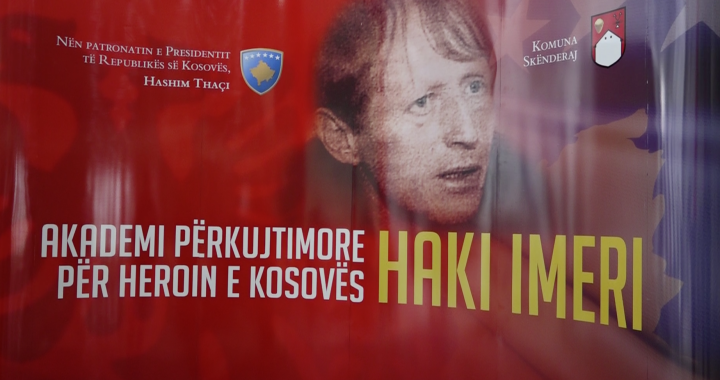 Kosovo President Hashim Thaci paid tributes on Wednesday at the grave of Haki Imeri, a Kosovo Democratic League, LDK, activist killed in Turiqec, in Kosovo’s Drenica region, in November 1999. Imeri’s killers were never found, but his case is considered to be one of the dozen political murders committed during or in the immediate aftermath of the Kosovo war.

Imeri’s family and LDK have been demanding a resolution to the case for years.

On Wednesday, President Thaci, the former leader of the Democratic Party of Kosovo, PDK, said that he decorated the late Imeri with the order “Kosovo hero, National hero.”

Thaci’s PDK, which was established after the war by some of the Kosovo Liberation Army, KLA, commanders, was at odds with Ibrahim Rugova’s LDK, which opposed violent resistance and throughout the 1990s pursued civil resistance to Serbia’s oppressive regime.

After paying tribute at the village’s graveyard, Thaci went to the primary school of Turiqec, where Imeri taught and where the memorial ceremony dedicated to his life was held. Local LDK representatives were not present at the ceremony for the first time, saying they had no knowledge of the event’s organization, although the local party branch usually organizes such commemorative gatherings.

No representatives from LDK’s headquarters were present at Wednesday’s ceremony either.

IImer Imeri, Haki Imeri’s brother, said that he has given a testimony to international prosecutors with regards to his brother’s murder. He anticipates that his case will be addressed by the Specialist Chambers in the Hague, which is expected to address allegations that KLA members had perpetrated war crimes during and after the 1998-99 conflict.

Haki Imeri was abducted in the middle of the day from the center of the village on November 1, 1999, and was found dead one day later in the village’s outskirts.

Speaking on Thaci’s presence at the memorial, Imeri said that he has talked to him about his brother’s death.

“Thaci has guaranteed that he has nothing to do with it and he is ready to swear upon it,” said Imeri.

At the time of Haki Imeri’s murder, Thaci was the premier of the Provisional Institutions of Self-Government, PISG, formed by representatives and supporters of KLA. The PISG never received LDK’s support.

When he held his speech at this ceremony, Thaci greeted representatives of “the entire political spectrum in Kosovo.”

Hashim Thaci, who presented himself in the speech as a student of the late Haki Imeri, said that Imeri worked towards “unity and was an intellectual.”

Thaci mentioned LDK’s contribution to KLA in the period before the war.

“Today we remember the active civil resistance of civic disobedience led by President Rugova,” he said.

“I ask for institutional justice, not justice by the Kanun [of Leke Dukagjini]. I ask institutions to truly shed light on the murder of our parent, and other murders done during and after the war in Kosovo. We ask for justice from international institutions. Not from the local ones, who are led by criminals,” said Imeri in a Facebook post.