Just because: Buta’s philosophy on life

For Ferizaj rapper Buta, American hip hop was the only relatable music. He now weaves together Southern trap, European fashion, and a Balkan point-of-reference into his “lifestyle rap.”

Betim Januzi has gone by his pet name “Buta” since he was a baby. Born in Ferizaj in 1995, he’s been writing music since he was 14.

“In 2009, we were listening to Albanian rappers and we were like, man, this shit is wack. I can do better! And this is when I started rapping.”

Southern US hip hop, with its sound enveloped in heavy base and lyrics that are taunting and playful, has been the audial backdrop for this up-and-coming Kosovo rapper.

He lives in Tirana, Albania but makes trips back to Ferizaj every so often to record and visit family. PI caught him during a trip home for a show at Ferizaj’s Dream Club and sat down in one of his recording studios for a conversation with some of his crew, The Ham Squad.

The studio we visited, Buta’s secondary recording space in Ferizaj, is nestled on a quiet residential street. Chilly without a heater running, the studio was rudimentary. 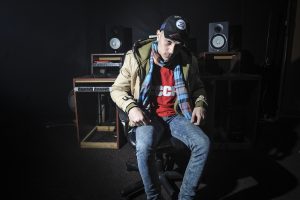 Despite the virile nature of some of his rhymes, in person Buta was confident yet humbly so. He came off as soft-spoken, even introverted. His first show in Prishtina filled the Hamam Jazz Bar and had crowds dancing and rapping along with him all night, but when he departed the stage, he did so quickly, maybe even bashfully.

But Buta’s rhymes are blatant and explicit in a way that distinguishes him from other Kosovo artists, who tend to rap about sex in metaphor. His videos and his beats relish in a DIY spirit, divergent from what he sees as the gaudier, phonier Albanian pop and ‘shqip hop’ scene.

“I choose beats on my laptop at home, come to the studio, finish it in 10 minutes. At home I’m not using any program, just Microsoft Word and Windows Media Player,” he said.

His beats and his skinny jeans paired with trench coats have caught the attention of Guri Mvrtini, a manager and designer in Switzerland. Mvrtini started sending Buta clothes to promote his brand. Attracted to Kosovo’s cheap recording prices, he even came to Ferizaj with Swiss rappers Hardy and Francky Loot to record a track with Buta.

Buta’s music draws its style from the trap subgenre, typically distinguished by its lyrical style and Roland TR-808 drum machine sound. Trap emerged from Southern US in the ‘90s and has traversed top hits lists and cultural critics’ lips. Its namesake is a colloquial term for drug den, its lyrics are gritty and graphic, and critics debate on whether or not it’s even a distinct genre or just a pseudo-genre created by industry people attempting to capitalize on its attractiveness to young, middle class white crowds.

Buta’s own notoriety in Kosovo may have had something to do with global fascination with rap culture. Still, what really struck a chord with fans was his smart play on current events. His popularity spiked when the track “Hashish Thaci,” with its well circulated music video, dropped last summer. In the video, he dons a skinny bare chest and Kurt Cobain sunglasses. The hook, a perfect earworm, is subtitled in English:  “got a chocolate, it aint milka doe. Two blunts like a pack of twix, woah. Hashish Thaci woah, I’m Hashish Thaci woah.”

“We were cooking hash in Tirana with my friends like everyday. I said ‘shit, I’m Hashish Thaci. I’m the president of this shit,’” he laughed.

He didn’t expect the track to catch on the way it did, but Kosovo at the time was alive with protest and public outrage regarding the “Pronto II affair,” a series of leaked wiretaps involving Kosovo President Hashim Thaci. “I didn’t know it was gonna be big. I recorded it in the studio before leaving for Tirana, and everyone was like, you gotta record a video for this. It came to coincide with current affairs, with the wiretaps.”

“Hashish Thaci” is from his Dr. Zhivago EP, named after the 1965 British-Italian romance film set in pre-WWI Russia, based on Boris Pasternak’s 1957 novel of the same title. The film’s snowy-white landscape and blonde lead actress (Julie Christie) inspired the theme of the EP—“blondes and cocaine,” as Buta explained.

This obscure reference may seem eccentric coming from a 21-year-old, but that’s his style. His studies in marketing, he says, have helped him to develop and target a niche audience. His next project, to be released this coming spring, will be inspired by fashion house lookbooks, he said. “I like European fashion too, so I mixed that up a bit, as you can see from my trench coat.”

But he is undoubtedly most interested in emulating American hip hop, particularly Southern trap.

“It’s the same sound, but a bit less sophisticated, if I may say. I think it’s my greatest achievement, to have fans that know English and could listen to Future or Young Thug, and they choose to listen to me and my crew.” 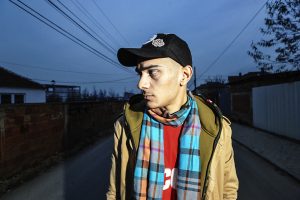 Bits and pieces of American hip hop even show up in his own songs. “Per Trip,” a twinkly, bubbly track, samples “mustard on the beat, hoe,” a tag that almost all songs produced by American DJ Mustard begin or end with.

He emphasized that the blending of his cultural influences—American music, European fashion, Balkan sensibilities—are all threaded together by what he calls his “lifestyle” approach to music making.

If I’m not enjoying my life, my music will be terrible. Buta

“We like to call the hip hop that we do ‘lifestyle rap.’ Everything we do basically ends up in the music, in a verse. What happens on Friday ends up in the verse on Sunday. If I’m not enjoying my life, my music will be terrible.”

Buta has not always felt so carefree, though. His move to Tirana at age 18 had its elements of escape.

“Here [Ferizaj], we were literally struggling to get out alive. Real problems. We had a real street beef with over 50 people involved. My brother did three years in the pen, people are dead… I went from that to enjoying life. It was a real shock to me. Not having to worry about being alive. Growing up, all I knew was suffering. I grew up without a father. My father figure, which was my brother, went to jail when I was 15.”

This is what drew him to hip hop.

“My mom works two jobs, even to this day… The only music we could relate to was hip hop.” 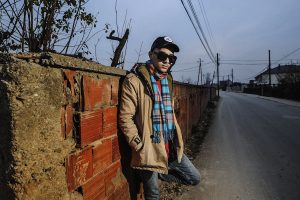 Hip hop’s ability to articulate struggle and societal ills and inspire resilience has been a longstanding topic of discussion amongst music historians, cultural critics, and people within the genre themselves. So have discussions about ownership, appropriation, and fetishization of the culture, and those who commercialize it. Buta’s “lifestyle rap” could be looked at with all of the above in mind, but it’s hard to not respect his rhymes as they flawlessly synthesize topics, creating an Albanian American syncretism in catchy hooks.

Mainstream hip hop has also inspired wide debates on the representation of women. Buta’s music has also elicited this response. His lyrics occasionally render the disposability of women; in “Hashish Thaci,” he says “cancel that bitch, I’ll order a new one.”

“I don’t think my music inspires sexism, it’s people’s upbringings. I don’t go out of my way to be misogynistic, but it’s stuff that comes in from the culture. Like any other issue, you can find it in hip hop. Want to talk about racism? Some other social issues? You can find it in hip hop. I’m not gonna lie, it’s a male energy thing. You have sex drugs and rock and roll… it’s in every music genre. I rap about murder, there’s drug dealing in my songs… but people don’t ask me if I’m trying to incite murder in my songs. There are big issues in my songs, but people focus on the things that impact them.” 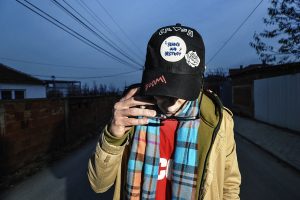 Buta’s concert in the intimate Hamam bar was packed with seemingly underage guys who dominated the space, rapping along with “my favorite combo is a blonde on blonde,” and most women in the crowd dispersed to the margins to dance.

This is the complicated nature of pop culture consumption: Buta’s lyrics, which are often  humorous, lewd, and absurd, may simultaneously amuse and offend.  Perhaps this is what makes the young MC an uncanny story of indie success. Prishtina is full of rappers from Kosovo and Albania, but places like Hamam, or even the city itself, hardly ever hosts MCs from other towns. But Buta’s “Hashish Thaci” has gone viral locally, and so has he.

“This last year, I’ve seen a rise in my popularity and I gotta make some decisions.”