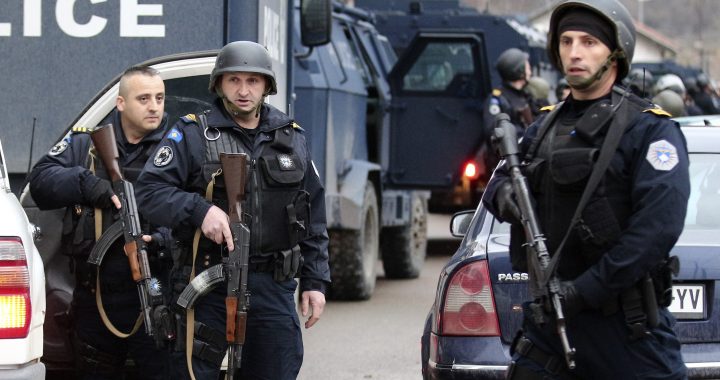 Kosovo police block street in the northern, Serb-dominated part of Mitrovica, Kosovo, Monday, March 26, 2018. A Serbian official has accused Kosovo of a "brutal use of force" in the arrest of Serbia's chief negotiator in EU-mediated talks with Kosovo. (AP Photo/Bojan Slavkovic)

Marko Djuric, the head of the Serbian delegation for the Brussels-facilitated dialogue with Kosovo, has been deported to Serbia after a brief detainment for illegal entry.

The Head of Serbia’s ‘Office for Kosovo and Metohija,’ Marko Djuric, has been deported after being arrested in North Mitrovica for illegal entry into Kosovo earlier today. Djuric and Serbian Defense Minister Aleksandar Vulin were banned from entering Kosovo on Monday according to a decision by the Kosovo Ministry for Foreign Affairs.

Kosovo Police deployed special units to the north of the country to obstruct the Serbian officials from entering. Later in the day, after reports of Djuric attending a town hall meeting in North Mitrovica, Kosovo Police special units intervened and arrested him.

“The state of Kosovo has implemented its laws today and exercised its full sovereignty. The Republic of Kosovo does not allow for any provocations and Serbia needs to understand that this country has a lord of the house,” wrote Assembly Speaker Kadri Veseli on Facebook.

Kosovo’s deputy Prime Minister and Foreign Minister Behgjet Pacolli said that the police’s actions were taken according to Kosovo law.

“He was warned several times to respect Kosovo’s law, as any citizen should respect the laws of the host, wherever they go,” Pacolli wrote on Facebook.