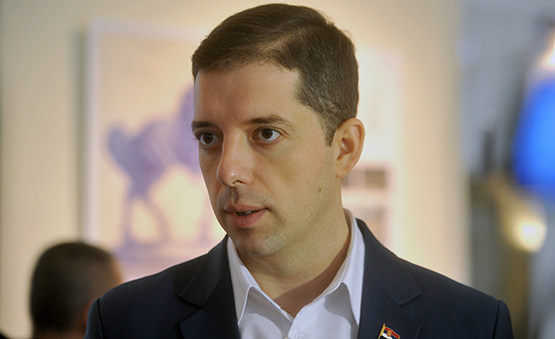 Marko Djuric. |Photo courtesy of "Office for Kosovo and Metohija"

Kosovo Police arrested the head of Serbia's 'Office for Kosovo and Metohija' in North Mitrovica.

Kosovo Police confirmed to BIRN on Monday that Marko Djuric, head of the Serbian government’s Kosovo office, had been arrested on Monday for illegal entry and transferred to Pristina by the Specialized Operational Unit of Kosovo Police.

Kosovo Special Police intervened following reports that Djuric was participating in a debate in the divided northern Kosovo town of Mitrovica.

Kosovo deployed its special police units in the Serb-run far north earlier during the day, after the government banned both Djuric and Serbia’s Defence Minister, Aleksandar Vulin, from entering the country.

Earlier during the day, Kosovo Foreign Minister Behgjet Pacolli warned that the Serbian officials would be arrested if they tried to enter Kosovo.

“Neither Djuric nor Vulin have permission to enter Kosovo today. Anyone who enters illegally in Kosovo will be arrested,” Pacolli wrote on Facebook.

“Djuric’s entry into Kosovo is in violation of the law, constitutional order and the Brussels agreement,” Deputy Prime Minister Enver Hoxhaj said.

“Such actions are highly dangerous and are intended to destabilize Kosovo. Kosovo will take all the necessary measures to maintain a peaceful situation within our territory,” he added.