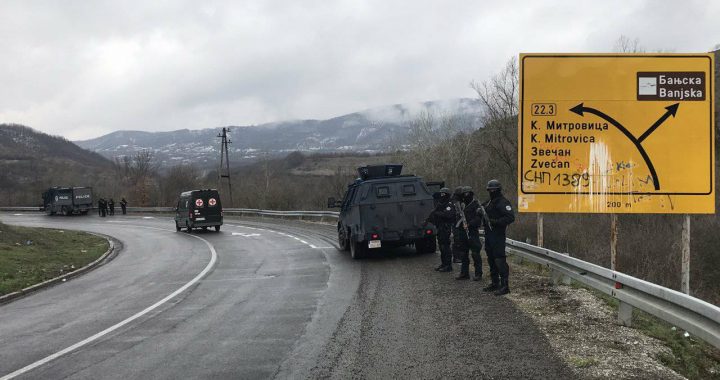 Kosovo Police sent a special operations unit to prevent the entry of Aleksandar Vulin and Marko Djuric after a Ministry of Foreign Affairs decision to bar their entry.

The Special Operations Unit of the Kosovo Police stationed armored vehicles in three villages in northern Kosovo to prevent Serbian Defense Minister Aleksandar Vulin and head negotiator in the EU-facilitated dialogue between Kosovo and Serbia Marko Djuric from entering the country.

The Kosovo Police issued a press release saying that Vulin and Djuric announced their visit to Kosovo despite an official decision by Kosovo authorities that banned their entrance.

“In order to enforce the official decision by state authorities, the Kosovo Police sent relevant police units that will act according to the situation regarding the decision by the Ministry of Foreign Affairs and the Republic of Kosovo,” the press release read.

Foreign Minister of Kosovo Behgjet Pacolli wrote a Facebook status saying that the Serbian officials will be arrested if they enter Kosovo.

“None of them have permission to enter Kosovo today, neither Djuric nor Vulin. Whichever of them enters Kosovo illegally will be arrested!” Pacolli wrote.

Another press release by the police said that Serbian Minister of Culture Vladan Vukosavljevic was allowed to enter Kosovo, yet willingly decided to return.

“Mr. Vukosavljevic’s allowed visit was planned to happen at the border crossing of Merdare, which connects Kosovo and Serbia, but it [the visit] did not occur there, rather it happened in Jarinje in the northern part of the country,” the press release said.

Serbian media reported that Vukosavljevic had planned a trip to Kosovo to visit Orthodox monasteries on Monday and Tuesday.

According to information by the news agency Beta, Djuric’s reason to visit Kosovo was to hold a session of the internal dialogue, while Vulin was planning to visit a Serb family in Kosovo that was attacked in 2013, leaving two children injured.

The Kosovo Police searched vehicles crossing through the northern border in Jarinje all day.