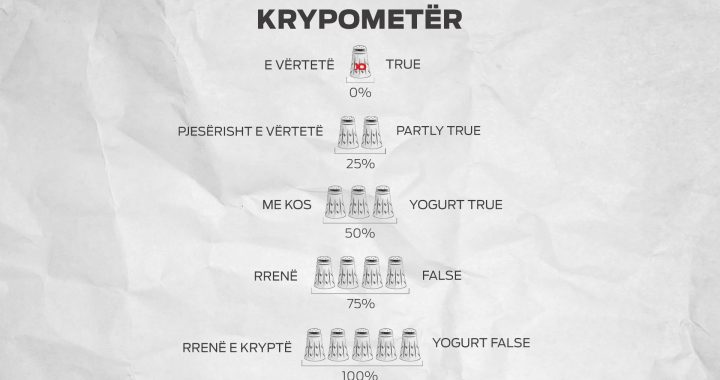 IFCN issues BIRN Kosovo and Internews Kosova’s fact-checking platform a badge for upholding principles of transparency and fact-checking after an external vetting process.

The International Fact-Checking Network, IFCN, has awarded BIRN Kosovo and Internews Kosova’s fact-checking platform Krypometer a licence for the platform’s work on checking the promises of Kosovo’s high officials.

The one-year licence has been issued for Krypometer’s nonpartisan and transparent work and its commitment to open and honest fact-checking.

The purpose of Krypometer (Albanian for Salt-o-meter)  is to reflect on the truthfulness of public statements, and to inspect the statements of political figures regarding issues of great local, central, or international importance.

“It is nice to see that our articles have been inspected and audited by an external verification process. Also, since we verify the facts of others, it is very healthy to see a prestigious network like IFCN vetting us,” she said.

“Throughout the media there are several online portals that do not reveal their funding; produce fake news and partial truths… and also others that are too lazy to do fact-checking, and are only interested in clicks. It is a great professional pleasure that after a year of its foundation, Kryptometer has distinguished itself… taking part in the big international family in which Washington Post and Politico is part of,” she added.

Faik Ispahiu, Director of Internews Kosova, said that the IFCN badge places Krypometer amongst the most credible media internationally.

“We are proud that our team–KALLXO, Jeta ne Kosove, Drejtesia ne Kosove, and Prishtina Insight–with Krypometer, has been listed amongst the most credible media in the world, as part of IFCN. Credibility and competence require hard work and constant engagement, but also provide the pleasure of going forward boldly and with a clear conscience,” he said.

Krypometer does not solely focus on political accusations and counter-accusations during electoral campaigns; it also strives to present the historical context of those declarations, as well as data analysis and explanations when politicians and diplomats try to distort the truth.

KALLXO.com and Jeta ne Kosove have become part of IFCN at the Poynter Institute, which is committed to excellence in fact-checking. BIRN Kosovo and Internews Kosova signed the Code of Principles in September 2016.