On October 7-9 Prishtina will host the sixth annual edition of REDO, a graphic design conference and lecture series bringing together Kosovo and international designers to discuss current issues in the field.

On October 7-9 Prishtina will host the sixth annual edition of REDO, a graphic design conference and lecture series bringing together Kosovo and international designers to discuss current issues in the field.

From Friday to Sunday, REDO will host several international guests to give lectures on graphic design, held in historically important buildings from the socialist era to celebrate Prishtina’s architecture and to discuss the threat of privatization of cultural spaces. 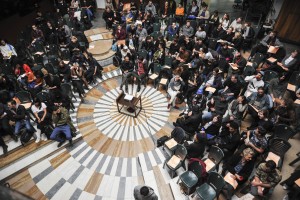 The list of presenters includes Ian Svenonius, an American cult musician, author, and radical leftist. REDO’s director Bardhi Haliti explains that the choice to include a musician reflects the evolution of the industry.

“Design is not just about logos and book covers anymore. It’s an approach. People use it as a tool to explore a variety of interests. I use graphic design to make ideas visible,” Haliti said.

Svenonius, a difficult-to-define artist and activist, will offer something closer to a performance art piece than a lecture. “Expect a crazy experience, it’s like a rock ‘n roll show.”

This year looks to be REDO’s biggest crowd yet. About 200 international designers and students have already reserved tickets (most Kosovo participants do not reserve beforehand) and many previous REDO guests are returning. The conference’s content and low 10 euro ticket price are probably major draws. Plus, Haliti pointed out, “Prishtina can be addicting.” 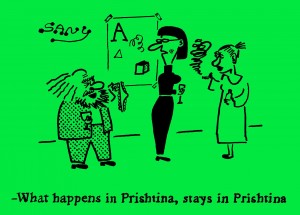 In spite of funding struggles, REDO has sustained over the years because the organizers’ desires to provide alternative design education in Prishtina–enough to volunteer their time for free. Though international donors such as the Netherlands, French, and United States Embassies support the project, Haliti says that the Kosovo government is not doing its part.

“We struggle with a lack of support from the government. We applied for an open call for grants from the Municipality of Prishtina four months ago and we still haven’t heard anything,” Haliti said. He also would like the Ministry of Education to have a stake in funding the program, since REDO tries to address gaps in the arts education available at the University of Prishtina and other schools in the city.

“We are trying to connect Kosovo students with students from abroad, and to provide a brief alternative education which they normally don’t have, considering the poorly organized curriculum at the universities.” 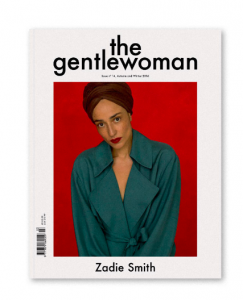 Veronica Ditting is Director of the London-based biannual women’s magazine The Gentlewoman.

Lectures will be held in the National Library, the Red Hall of the Palace of Youth and Sport, and the Rilindja building, which used to house an avant-garde publisher active from the 60s-90s and the first Albanian newspaper in Yugoslavia.

Currently Rilindja is operated by the Privatization Agency, but the privatization process is in an ambiguous limbo period. As a result, REDO is renting the space out.

“[The agency] ask[s] for 800 euros, but you shouldn’t have to pay to use a public space, especially if it’s an educational program.”

The REDO agenda includes discussions on the politics and the historical significance of the buildings in which lectures are held. Rilindja used to print Kosovo schoolbooks. And during Yugoslavia, Prishtina residents donated small monetary contributions to the Palace of Youth and Sport, so it symbolizes collective ownership under the socialist period. Haliti sees these spaces as important to Kosovo’s cultural setting and history.

Similarly to how Dokufest utilizes Prizren’s Lumbardhi Theater in an attempt to intervene in the privatization of cultural institutions, REDO hopes to showcase Prishtina’s potential to preserve state-owned buildings and re-imagine their potential.

“I want to showcase the potential for what these spaces could be if they are not privatized,” Haliti said. The Palace of Youth and Sport | Photo courtesy of REDO

Lectures will be held Friday-Sunday and will start late in the evening to allow time for informal activities and tours around the city. Tickets can be purchased at the conference venue. For schedule information, see REDO’s website.

*Correction: The article previously mentioned an open call for grant funds from the Ministry of Culture. The call was issued by the Municipality of Prishtina, and the article has been updated to reflect Haliti’s quote.

by Die Morina
Next: Big Deal

Kosovo police officer suspected of expelling a Serb family in 1999