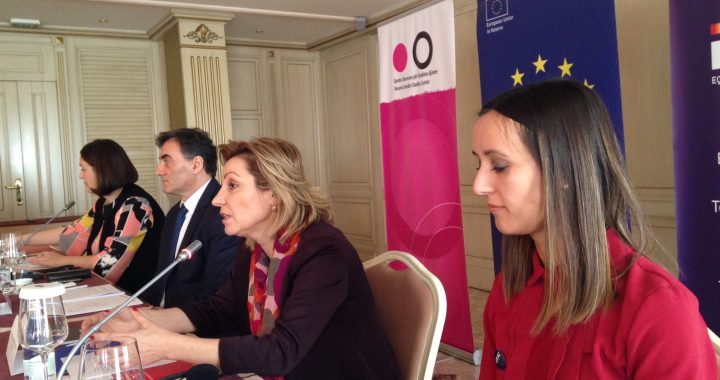 Mentality, illiteracy, and party clientelism contribute to Kosovo institutions’ failure to comply with the Law on Gender Equality, according to Kosovo Gender Studies Center.

Despite progressive legislation, “the enforcement of the principle of equality in everyday life lags behind,” said Nataliya Apostolova, Head of the EU Office in Kosovo, at the report’s launch on Thursday.

Kosovo’s Law on Gender Equality, LGE, was written to “guarantee, protect and promote equality between genders.” The law defines unequal gender representation as when representation of one gender is less than 50 per cent at any level of political and public decision-making bodies.

The report “Women’s Participation in Decision-making in Kosovo” states that representation of women lags well behind that of men in decision-making bodies. According to the report, women represented 40.6 per cent of employees in Kosovo’s ministries and office of the PM in 2016. In 2015 at the municipal level, women composed 28 per cent of total employees.

Numbers are even lower for senior leadership positions. In 2015, women represented 5.2 per cent of senior positions at the central level (or 3 out of 58), and 10.1 per cent at the municipal level (or 32 of 315). In 14 municipalities, women held no leadership positions at all. Indeed the only exception of gender balance on a municipal level is Drenas, where the newly elected mayor Ramiz Lladrovci appointed five women in directorial positions this week.

“Mentality and illiteracy are considered to be the main reasons in limiting women’s roles in decision making,” the report states.

Report author Lavdi Zymberi also points to a discrepancy in the LGE and the Law on General Elections.

“It is worth noting that the Law on General Elections does not comply with the LGE, namely it requires a quota of 30 per cent of all candidates on the candidate list of political parties to be from the less represented gender, while the LGE foresees equal participation (50 per cent) at every level of decision making in political and public life,” the report states.

“It’s not just tradition. The system of party clientelism supports the elites… Most seats have been reserved for men. We would like to change this and start reforms from political parties, which have their own structures, and we would like to place criticism here, especially at the local level,” Demolli said.