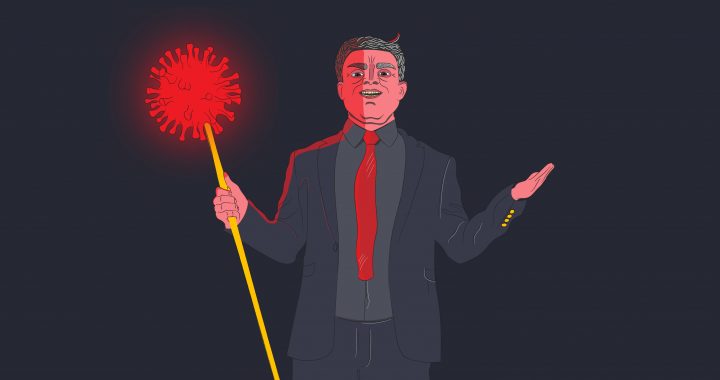 The coronavirus pandemic has exposed the levels of trust between states and their citizens in the Western Balkans and beyond, and as governments tackle a new phase of the crisis, tensions between political freedoms and authoritarian tendencies will continue.

Crises are good moments to coin new phrases and in recent weeks, we have heard mention of the “Corona dictatorship”, the “authoritarian virus” and the “disease dictator”.

As states of emergency have been declared formally or informally around the world, civil liberties and democratic rules have been suspended in both liberal democracies and outright dictatorships. At the same time, surveys across the world gave a boost to ruling governments and presidents, even when they bungled the response badly, like US President Donald Trump.

Certainly, the world is not giving up on democracy. However, in moments of crisis, calls for “whatever it takes” and the idea that “saving lives is more important than the rules” are convincing. As understandable as this reflex might be, it has led to restrictions of democracy and human rights around the world that are not only unprecedented, but also often disproportional and counterproductive.

While countries across Europe, including the Western Balkans, have been taking the first steps to lift the more restrictive measures, there will be a long period of what some politicians call the “new normality.” Of course, there is nothing normal about this normality, as restrictions will remain in place and citizens will have a long period in which life will not be as it was before March 2020.

This period brings with it risks. First, we don’t know how long it lasts. It might be a year or more until a vaccine is found, or the virus becomes less virulent. Second, it might be shaped by ups and downs, new restrictions being lifted and reimposed – there will not be a  clear progression from heavy restrictions to increasingly lighter ones. Third, as governments and citizens get used to this “normality”, many measures will stay in place, and many might just accept the restrictions, surveillance and other measures.

There probably will not be a single day when the old “normality”, the one we lived under before March 2020 will be switched back on. During this long transition, much might stay as it is now rather than returning to what it was like before.

Passports only became common just over 100 years ago, introduced during World War One and kept during the “Spanish Flu” pandemic after the First World War. Now, they are normal. As Emilian Kavalski and Nicholas Ross Smith noted a few days ago in a commentary, immunity passports may be the lasting effect of this pandemic, creating a new hierarchy of citizenship.

The risk that restrictions of democracy and civil liberties become permanently restricted are great. Many emergency measures, especially under authoritarian and semi-authoritarian regimes are open ended, like in Hungary, or not well defined and based on a clear constitutional foundation, like in Serbia.

However, even if the states of emergencies were to be revoked now or in the near future, they have often caused profound damage. In Hungary, the Orban government has used the measures to weaken municipal funding, especially in opposition strongholds, and forced parties to donate money to the emergency fund, hurting the opposition more.

Restrictions on media freedom have also had a chilling effect on independent and critical reporting, and can continue to do so even once restrictions are lifted. Restrictions on freedom of the press, as has been the case in China, may prevent a transparent investigation and hamper critical discussions that can lead to mistakes being corrected.

In the latest policy analysis from the Balkans in Europe Policy Advisory Group (BiEPAG), we argue that fighting the pandemic does not require authoritarian measures or rule. On the contrary, the countries that have dealt best with the pandemic, like Taiwan and South Korea, are democracies.

Democracies have been able to take restrictive measures, while keeping parliament working at all times, safeguarding press freedom and taking measures that are proportional and limited in scope and time. In most states in the Western Balkans however, long curfews, high fines and repressive measures have been characteristic.

It appears that most countries in Central and Southeastern Europe were less hard hit by the pandemic than Western Europe, in part due to most governments taking stronger measures earlier.

This has several explanations. With more fragile health systems, governments realized that they had to respond more forcefully than in better equipped countries. The countries were also affected later and could respond earlier in regard to the spread of coronavirus than in Italy, for example.

While the rigid measures bore some results, they are not the sole cause and it certainly does not prove that the radical steps of curfews work.

The strict measures also reveal the fragile relationship between society and state in the region. States with high levels of trust relied on citizens to follow recommendations – Sweden, for example, the country with the least restrictive measures, has been able to avoid the worst of the pandemic, by encouraging citizens to follow government advice, rather than imposing restrictions.

The case of Sweden has been a qualified success, as its death rate is considerably higher than its Scandinavian neighbors, but it shows one extreme of trust-based communication.

But where trust is low, restrictions are the only path available. This absence of trust has been highly visible in Serbia, where the president has been scolding citizens like little children and belittling journalists who dared to ask critical (or even not so critical) questions. State imposed measures locked citizens up for days and then officials were surprised and berated citizens for crowding public places in the limited hours available.

Kosovo has been an extraordinary counterpoint. The sabotage of the new government during the pandemic, egged on by the United States, created competing centres of authority, the president and the acting government, when a single voice mattered the most. Amidst recrimination and political fighting, the message of the political elite, especially those around the president and the old elite, was clear: the pandemic is less important than gaining political points.

In the wreckless effort of the Trump Administration, led by special envoy Richard Grenell, to push for a deal with Serbia as soon as possible, neither the pandemic nor democratic processes in Kosovo mattered much.

While in Serbia and most other countries of the region, the pandemic strengthened governments, in Kosovo, it facilitated (but not caused) its overthrow. The surprise in Kosovo has been the ability of the institutions to function despite the power struggle and avoiding the worst effects of the pandemic. Still, it has not helped to reinforce trust in the state.

When the state does not trust the citizens, citizens do not trust the state. This also means that the moment repressive measures are lifted, things will return to “normal” in terms of people’s behavior and finding a balance to manage the pandemic over a longer period of time will be very challenging.

This trust did not disappear overnight. It is part of a long process of the erosion of public institutions, what the European commission has identified as “state capture” in all countries of the Western Balkans.

This has been thrown into a sharper light in Serbia. As the authorities mocked the virus, media loyal to the regime talked about Serbian genes being immune to COVID-19. Such an atmosphere undermines the credibility of the government and its institutions, and further weakens public trust. The danger is that this will justify and lead to more repressive measures and facilitate the slide into (post-)Corona authoritarianism.

Florian Bieber is professor of Southeast European History and Politics at the University of Graz and coordinator of the Balkans in Europe Policy Advisory Group (BiEPAG). He tweets at fbieber. His book “The Rise of Authoritarianism in the Western Balkans” was published by Palgrave in 2019.