Urbanisation and migration abroad is emptying village schools in the Drenica region, while expanding towns like Fushe Kosove struggle to cope with the influx of new pupils.

When Teachers’ Day was celebrated across Kosovo on March 7 this year, just 11 flowers were given to Xhevdet Behrami – one from each fourth grade pupil at the Kuvendi i Drenices primary school in Lower Abri, a village near Skenderaj.

As Behrami thanked and hugged his pupils one by one, he explained that next year he will receive only eight flowers. Three pupils will migrate from the village with their families, and the next school year will start somewhere else for them. 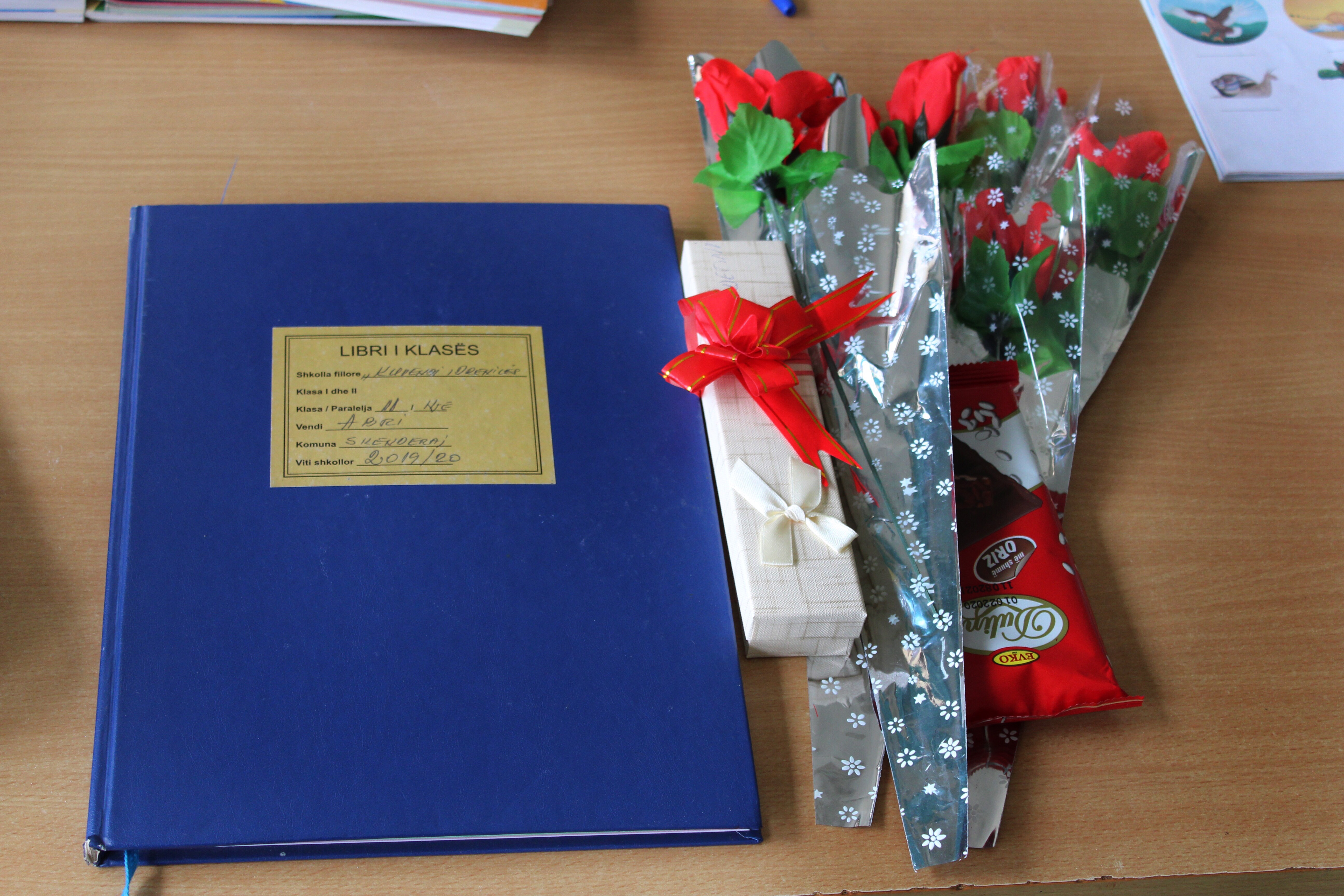 Flowers that were given to teacher Xhevdet Behrami on the Teachers’ Day. Photo: Halim Kafexholli.

The 50-year-old teacher, who started teaching in 1991, understands why residents are migrating from the village, with unemployment a serious local issue.

Emigration from the village is happening fast. A census conducted following the war in Kosovo in 1999 recorded that Lower Abri contained around 400 houses. Today that figure stands at just 185.

This ongoing depopulation means that from fifth grade and up, the Kuvendi i Drenices primary school is also attended by children from the neighbouring village, Murge, which is three kilometers away. When the school year started last September, 180 pupils were attending, but this number has already dropped to 175 after five children left the region, mostly to other cities in Kosovo.

Vesel Islami, the school’s Albanian Literature teacher, is concerned about the falling numbers of pupils attending the school. “Domestic migration has had the biggest impact on the number of pupils,” Islami told Prishtina Insight. “Our village is quite far from Skenderaj, and this is pushing people to disperse to other cities.”

Shkendije Idrizi from the Department of Education at the Municipality of Skenderaj told Prishtina Insight that over the last two to three years, the number of classes in village schools has been getting smaller. She added that if this trend continues, schools might even close.

According to the municipality’s statistics, the number of pupils attending primary schools in Skenderaj is decreasing by 450-500 per year. Figures from the Ministry of Education, Science and Technology presented by KTV in February showed that 29,000 fewer children were now in schools as a result of emigration from Kosovo over the last five years.

The decrease in the number of pupils year on year is also bringing teachers’ futures into question. Islami, who is 35, fears that if his school is closed it would be hard to find other work locally.

“There is no room for two Albanian Literature teachers if we have to be transferred to other villages,” he told Prishtina Insight. “I would have to think about migrating to the west myself.” 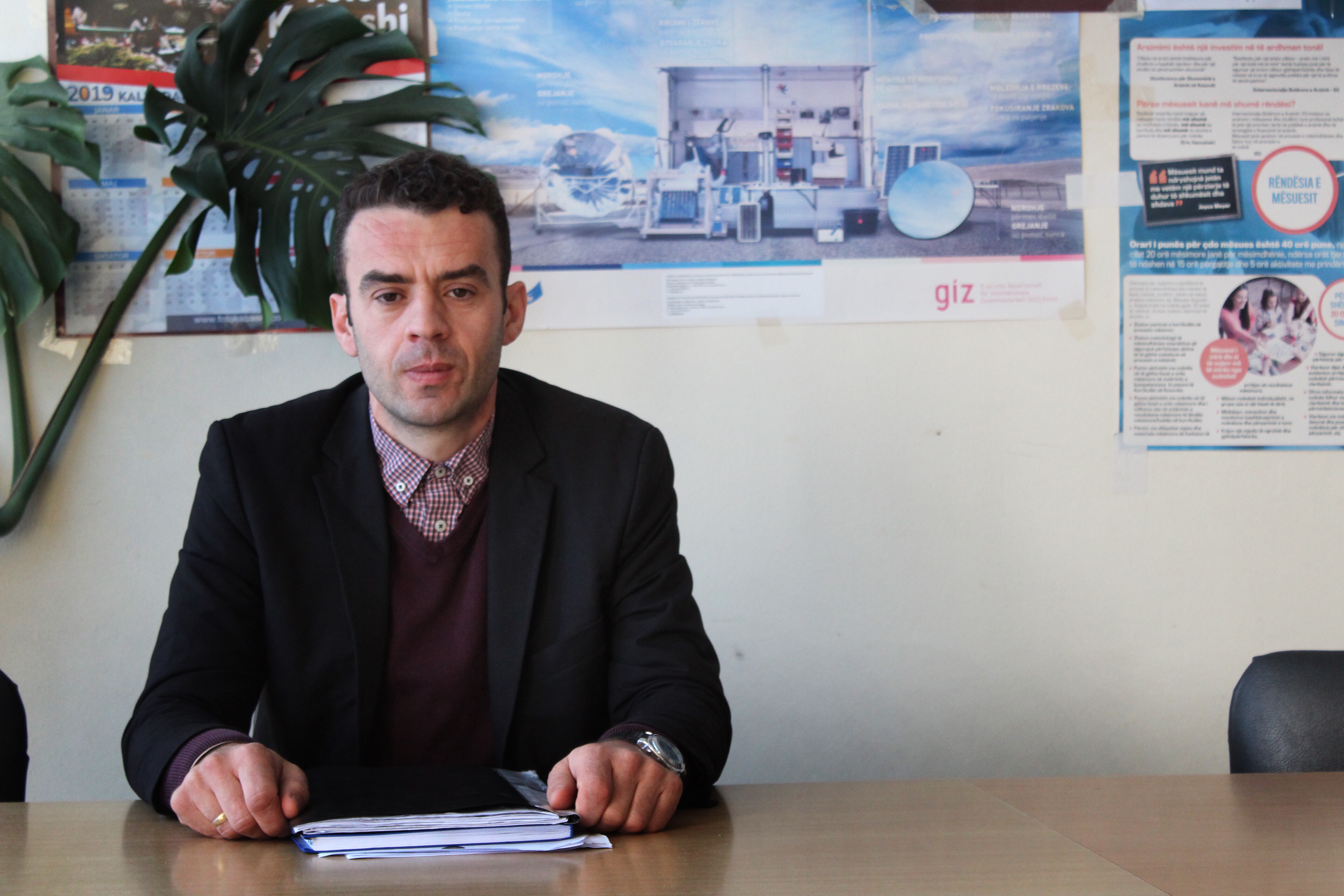 The Municipality’s Department of Education could not offer any guarantees about teachers’ futures. “With pupils leaving, we certainly are obliged to decrease the number of teachers,” the department told Prishtina Insight.

According to the new education minister Hykmete Bajrami, the ministry will start reorganising the school network. Prishtina Insight enquired about whether this would mean reducing the number of teachers but did not receive a response.

Sylejman Hoxha, the principal of the Ismet Rrahmani primary school in Aqareve, another village in the municipality of Skenderaj, is worried about his future, as well as that of his colleagues.

Hoxha believes that teachers that are near retirement are less concerned, but for those at the beginning of their career, it is an issue debated on a daily basis. “There are five schools which are more likely to be closed next year than to be open,” he told Prishtina Insight.

Aqareve was a stronghold of the Kosovo Liberation Army between 1998 and 1999 and had around 2,000 residents back then. Now it is one of the most abandoned villages in the Skenderaj municipality, with only 60 houses.

The Ismet Rrahmani school has 130 pupils currently attending, four less than when the new school year started in September 2019. “There are some neighborhoods with no pupils left at all,” Hoxha said.

In the village of Tice, eight kilometres from Aqareve, history teacher Fehmi Qorri shares the same concerns. With only eight pupils under his supervision, the teacher at the Ismet Uka primary school says the dwindling numbers create a difficult situation. 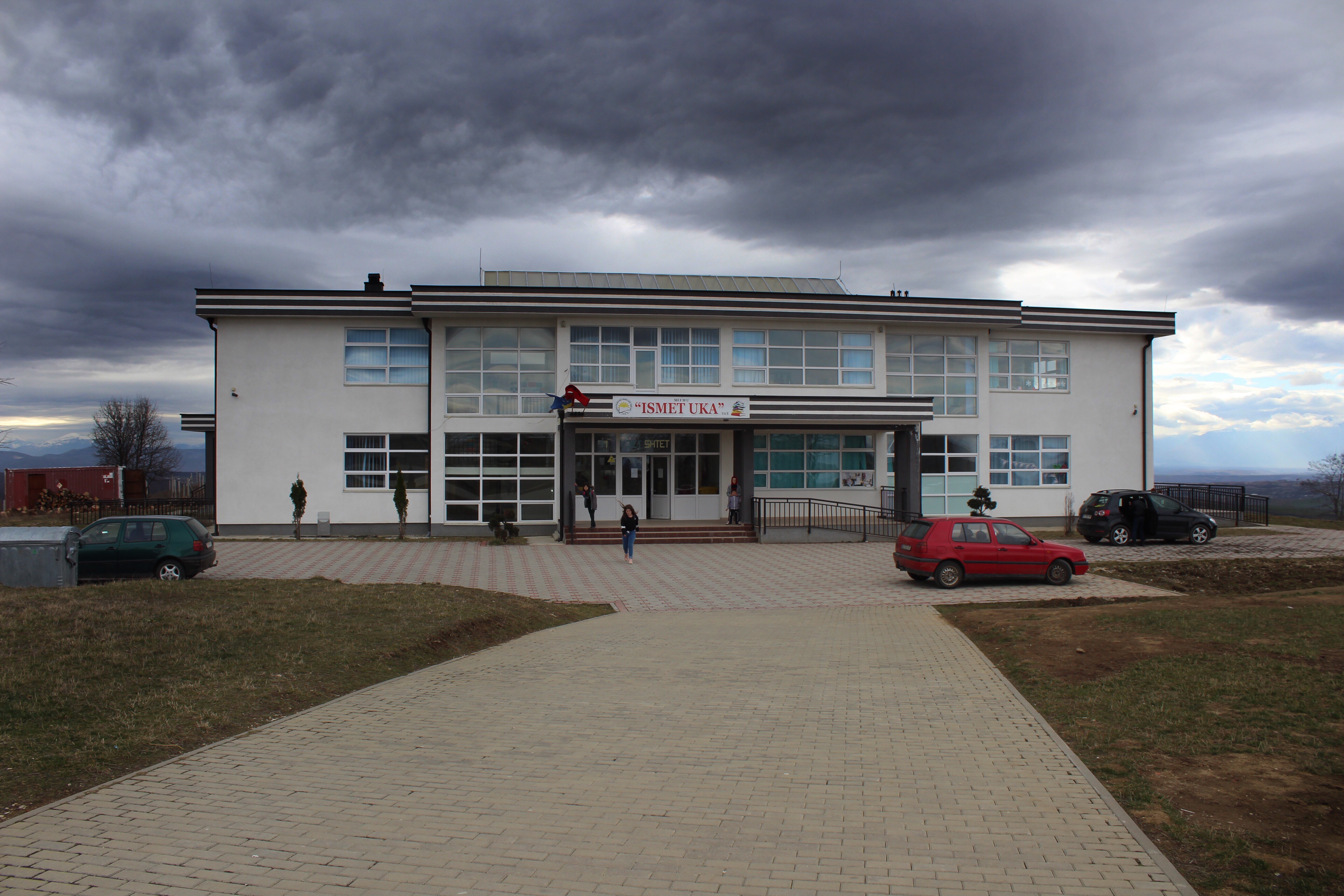 “It is not easy to hear fourth grade children discussing the months remaining until their parents’ visas are granted,” the history teacher said. “This mass abandonment of the village did not even happen during the war, when the school served as a shelter for refugees.”

All of the teachers Prishtina Insight spoke to connected migration with the demand for better conditions. The entire Drenica region is plagued by unemployment, with many families receiving social assistance.

According to data from the Employment Agency of Kosovo provided to BIRN in January, there are more than 8,000 people unemployed in the Municipality of Skenderaj, which has around 50,000 inhabitants.

Meanwhile, data obtained by BIRN from the Ministry of Labour and Social Welfare in August 2019, showed that around 2,000 families in Skenderaj and its neighbouring municipality Drenas received social assistance, out of a combined population of less than 110,000 people.

A different story in Fushe Kosove 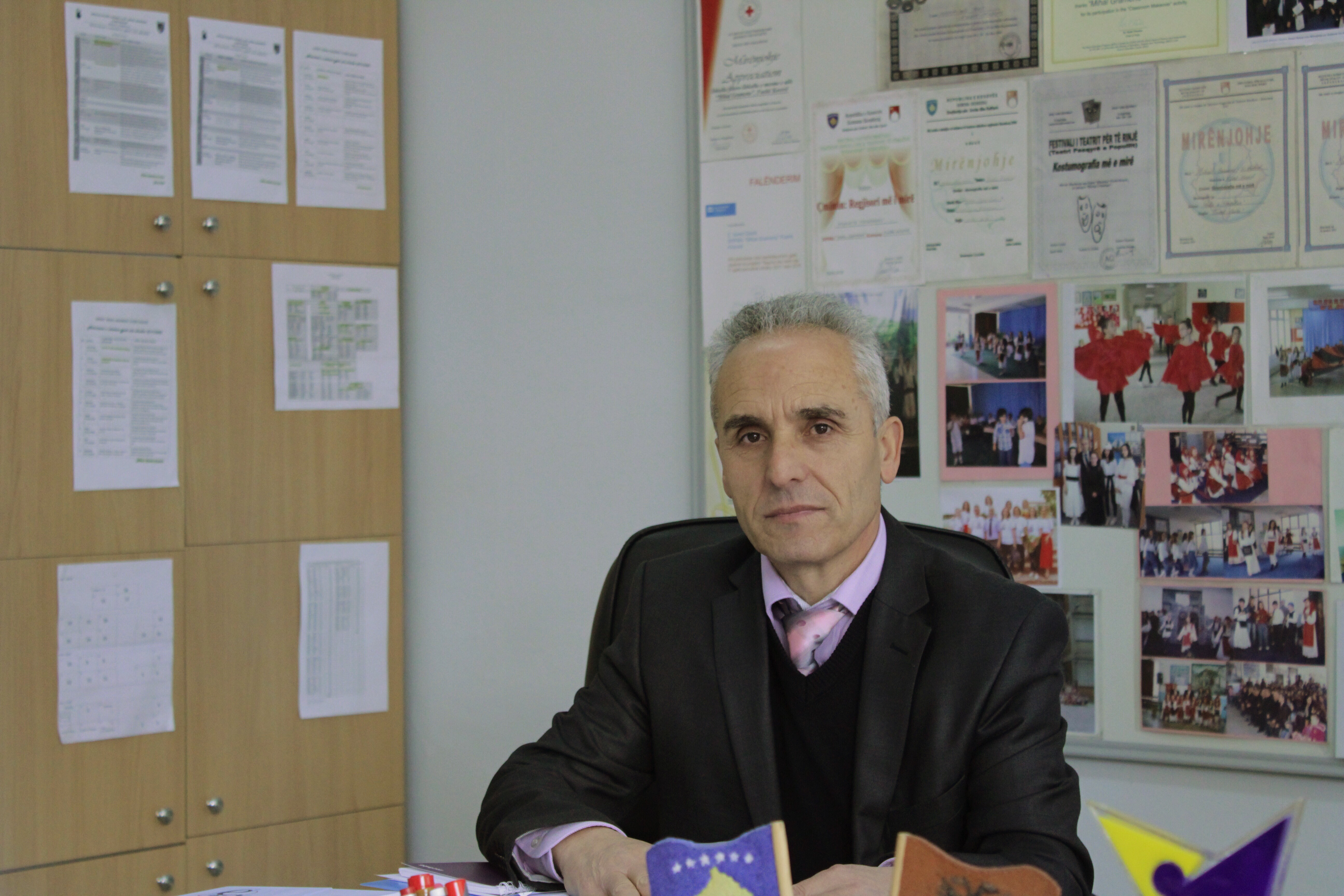 Ismet Gashi is the principal of Mihal Grameno, the biggest primary school in Fushe Kosove with 3,246 pupils attending the school in two separate shifts. Gashi says that transfer of pupils from the Drenica region in particular has overcrowded the school, sometimes leading to classes of up to 49 pupils.

“In the space of one week we can have seven or eight new pupils,” the principal told Prishtina Insight. “It’s very difficult to manage the situation.”

As a result of people from different regions hoping to start a new life in Fushe Kosove, 14 different first grade classes started at Mihal Grameno alone in 2019, placing a strain on the school’s facilities. Gashi told Prishtina Insight that the school needs more teachers, in addition to the expansion to the building already taking place at the school.

But while the principal in Fushe Kosove needs to expand capacities at the school to cope with demand, Fehmi Qorri, the history teacher in the village of Tice, finds it difficult to motivate his pupils, their minds seemingly elsewhere. 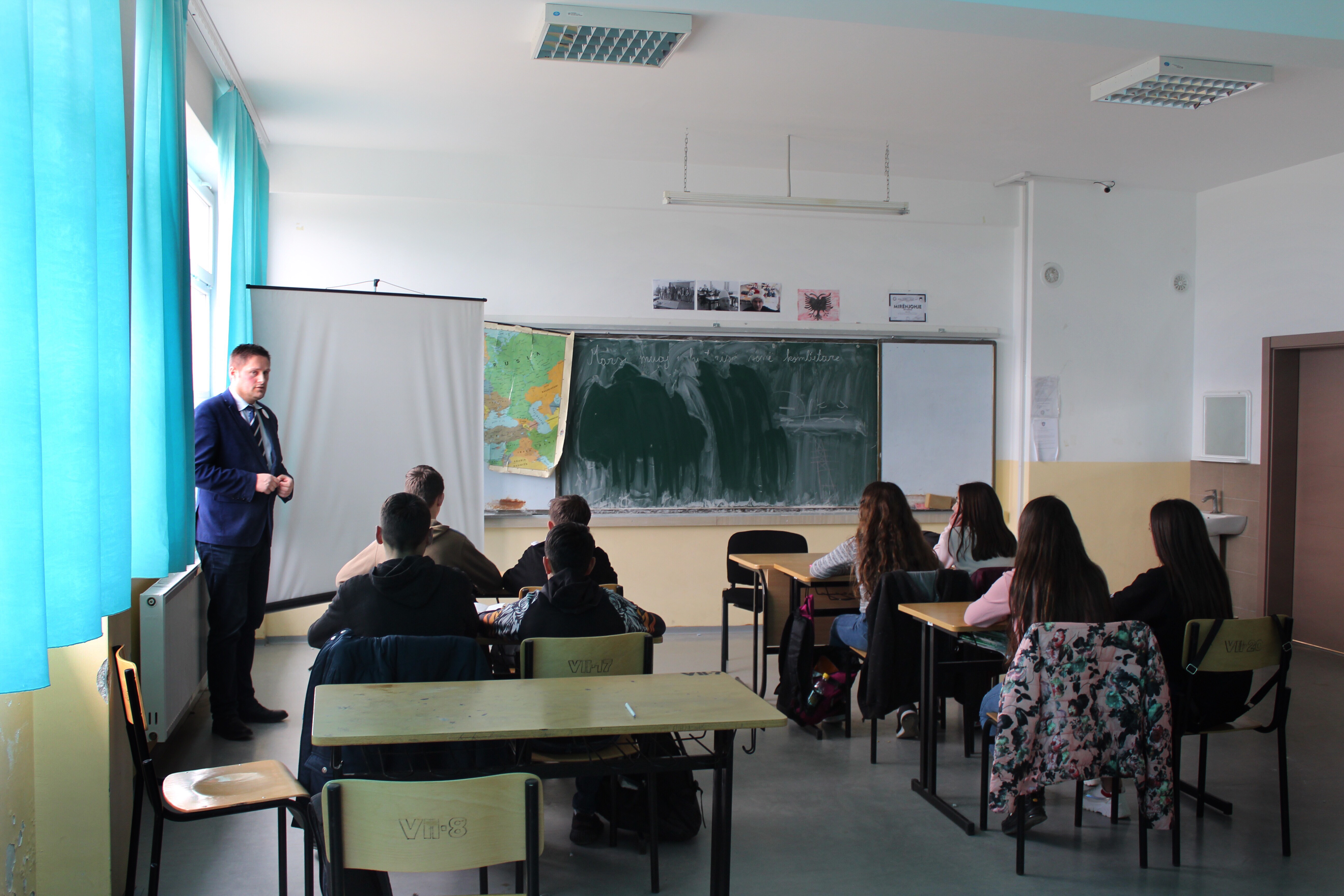 “There is not much attention on education even from the pupils that remain,” he said, adding that many pupils are distracted by their parents’ discussions on migration.

“Listening to these chats at home is creating a trauma in the children, who are then not focused on learning,” Qorri told Prishtina Insight. “They have the perception that there is no future here because their parents are constantly thinking of leaving.”