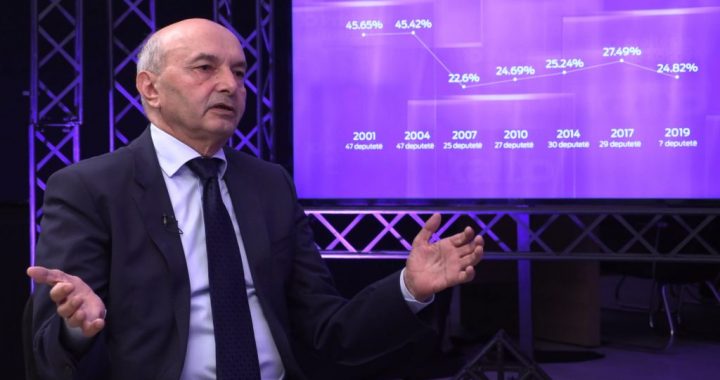 LDK leader Isa Mustafa has told Prime Minister Albin Kurti that his party will quit the coalition government if the premier does not revoke his sacking of former interior minister Agim Veliu.

Isa Mustafa, the leader of the Democratic League of Kosovo, LDK, the junior party in Kosovo’s governing coalition, told Prime Minister Albin Kurti on Friday that he must revoke the sacking of LDK’s former interior minister Agim Veliu and apologise, or face the collapse of the ruling alliance.

Mustafa, who initiated procedures for a vote of no confidence in Kurti’s administration on Thursday, said that if the premier did not comply, the LDK could no longer be part of the governing coalition.

He also said that Kurti must immediately remove Kosovo’s 100 per cent tariff on imports from Serbia, in line with what the US has demanded.

“I expect Mr. Kurti to remove this tariff today and cancel the decision to dismiss Mr. Veliu. He has to apologise to him and to LDK for his actions,” Mustafa wrote on Facebook.

Kurti, leader of the ruling Vetevendosje party, sacked the former Minister of Internal Affairs and Public Administration on Wednesday amid a disagreement over how to tackle the coronavirus crisis.

Kurti said that Veliu was dismissed because he had undermined the government by publicly supporting the idea of declaring a state of emergency, and because he had spread panic about the pandemic.

Even before Veliu was sacked, LDK was already in dispute with its coalition partners in Vetevendosje over whether to immediately lift Kosovo’s 100 per cent import tariff on Serbian goods.

The US has called for the tariffs to be removed as soon as possible. Kurti unveiled plans in February to gradually replace the tariffs with reciprocal economic measures towards Serbia, but was unable to convince his coalition partners following strong criticism from senior US political figures.

The level of political wrangling amid the coronavirus crisis caused people in Prishtina to take to their balconies in protest on Thursday evening, banging pots and pans to demand that the country’s leaders focus their efforts on addressing the public health emergency.

The European Parliament’s rapporteur for Kosovo, German MEP Viola Von Cramon, has also publicly criticised the decision to initiate a motion of confidence during the global coronavirus pandemic.

“At a time of extraordinary circumstances and closure of borders, where normal political life is vastly suspended the coalition partners should set their differences aside and focus on measures against the spread of coronavirus,” Von Cramon wrote on her website. “LDK should consider suspending its decision on a motion of no confidence until after the end of the public health crisis.”