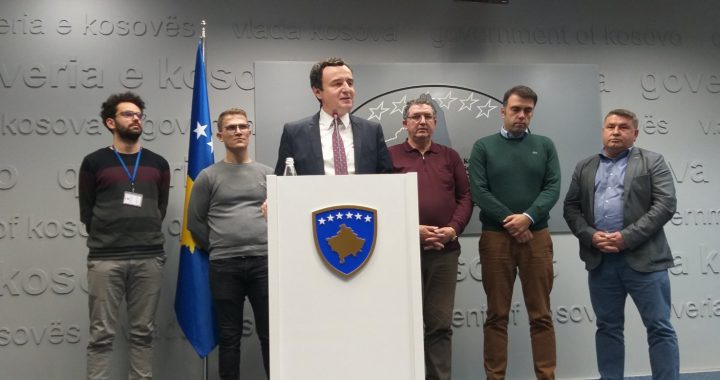 Prime Minister Albin Kurti has announced plans to remove part of the 100 per cent customs tariff on goods imported from Serbia, with plans outlined to abolish further elements if Serbia halts its de-recognition campaign against Kosovo and removes trade barriers.

At a press conference on Thursday evening, Prime Minister Albin Kurti announced the Kosovo Government’s decision to remove raw materials from the 100 per cent customs tariff applied to imports from Serbia and Bosnia and Herzegovina by March 15.

“As a government, we will decide on March 15, 2020 to abolish the tariffs on raw materials imported from Serbia and Bosnia and Herzegovina, as a sign of good will and readiness to resolve the economic dispute with Serbia,” Kurti said.

The prime minister also outlined future plans for removing the tariff, stating that if Serbia pledged to halt its ‘de-recognition campaign’ against Kosovo and remove barriers to trade, the tariff would be completely lifted for 90 days, beginning from April 1.

However, Kurti warned that if Serbia failed to drop the campaign, “the principle of reciprocity” would begin to be applied from the same date, starting with economic measures.

The prime minister added that if no movement from the Serbian government on these issues had occurred by June 15, the government would reimpose the full tariff and continue to implement reciprocal measures.

Kurti also stated that the EU should “appreciate” the Kosovo Government’s gesture of removing the tariff on raw materials. As part of his announcement, he suggested that the visa liberalisation process, which is set to remove restrictions on Kosovar citizens wishing to travel within the Schengen zone, should be completed before the Zagreb summit in May.

“Tonight the deceitful Albin surrendered to Serbia,” Haradinaj wrote in a Facebook post. “This is the beginning of the return of Serbia and Russia. Albin, the deceitful, from tonight you are responsible for Serbia’s economic reoccupation of Kosovo.”

Kosovo has faced pressure to remove the tariff from a number of international political figures, most recently the United States’ Special Envoy for the Kosovo-Serbia dialogue, Richard Grenell, with voices inside the Kosovar political spectrum claiming the country was straining relations with its allies.

“I hear the demands of the international community,” Kurti said at the press conference. “I am very patient and cooperative, but at the end of the day I am the Prime Minister of Kosovo and I am here to protect the interests of Kosovo. I cannot be in any way an international, I am Albanian.”