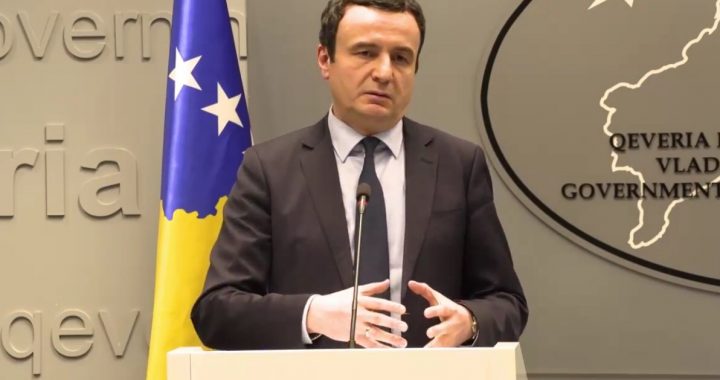 The Kosovo Government has voted to remove the 100 per cent import tariff on raw materials entering from Serbia, with a no-confidence motion in the government set to be put to parliament in the coming days amid a crisis between coalition partners LDK and Vetevendosje.

On Friday night, Prime Minister Albin Kurti announced a government decision to remove the 100 per cent import tariff on raw materials entering Kosovo from Serbia and Bosnia and Herzegovina. The decision also states that on April 1, the government will make a decision to repeal the rest of the tariff, replacing it with reciprocal measures with the two countries.

Kurti added that from midnight, six border points would be opened to allow the import of raw materials.

The decision was passed with 10 votes in favour and 2 abstentions. BIRN learned from Vetevendosje officials that it was only representatives from Vetevendosje and Kosovo Bosniak Minister for Local Government Emilija Redzepi that voted for the bill.

All cabinet members from Vetevendosje’s coalition partners, LDK, did not participate in the vote, which was reported to have been conducted via email. The two Lista Srpska representatives in the cabinet abstained from the vote.

Xhelal Svecla, who is acting Minister for Internal Affairs following the dismissal of Agim Veliu voted for the decision, alongside Kurti, Deputy Prime Minister Haki Abazi, and the six other ministers nominated by Vetevendosje.

A partial removal of the tariff, including removing duties on raw material, was outlined by Kurti in February. However, LDK representatives were quick to distance themselves from the plans, with Deputy Prime Minister Avdullah Hoti describing them as “not a decision of the government.”

The plans also drew criticism from a number of senior US political figures, triggering an extraordinary session of the Kosovo Assembly to discuss Kosovo-US relations.

In a public statement, Kurti apologised for failing to introduce the plans by March 15, the initial deadline for the removal of the tariff on raw materials set out in February. He stated that the proposal had not become a government decision due to being unable to convince LDK members of the cabinet.

Earlier on Friday, LDK announced that it had submitted a no confidence motion against the government to the Kosovo Assembly secretariat, having secured 46 supporting signatures from Kosovo MPs.

In a Facebook post, the party stated that the LDK leadership had given Kurti an additional opportunity on Friday to completely remove the tariffs on goods imported from Serbia and return Agim Veliu to office, following an ultimatum issued by party leader Isa Mustafa. Kurti sacked Veliu on Wednesday amid a disagreement over how to tackle the coronavirus pandemic.

According to the Kosovo Constitution, the motion of no confidence shall be placed on the Assembly agenda between two and five days from the date it was presented, and requires a simple majority to be adopted.

At a press conference on Friday, the opposition leader and head of the Democratic Party of Kosovo, PDK, Kadri Veseli, stated that he supported the no confidence motion. Leading figures from other opposition parties have also expressed support for the bill, including former prime minister Ramush Haradinaj of AAK and former foreign minister Behgjet Pacolli of AKR.

With Kosovo tackling an outbreak of coronavirus, the timing of the motion has been widely criticised. Writing shortly after the announcement that the motion had been submitted, LDK’s Speaker of the Assembly Vjosa Osmani took to Twitter to state “#FightCOVID19 #DontFightEachOther.”

Osmani told BIRN on Wednesday that both her and Minister of Infrastructure Lumir Abdixhiku did not support the motion to initiate a no confidence vote against the government.