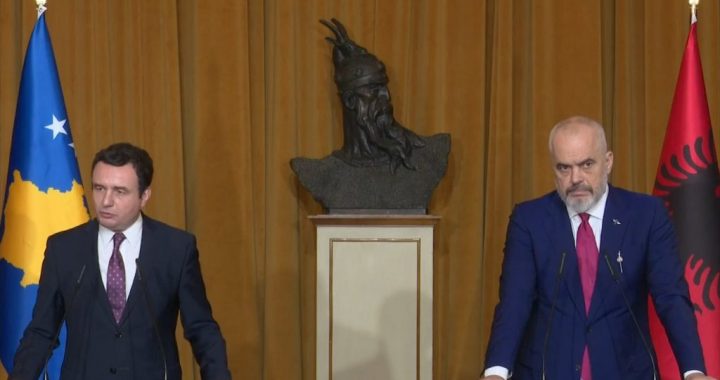 The involvement of Kosovo Prime Minister Albin Kurti and Vetevendosje in backing opposition candidates in Albania’s elections risks creating divisions between the two countries when they should be working together to tackle the pandemic.

Members of Kosovo’s government and MPs from the ruling Vetevendosje headed to neighbouring Albania over the weekend, a couple of weeks ahead of the Albanian parliamentary elections on April 25.

Almost all of them have posted on social media their support for three candidates running for parliament in Albania. Although officially independent, the three candidates in different municipalities enjoy the open endorsement of Vetevendosje.

His intervention is not something new, as Kurti has on many occasions taken a stance on Albania’s internal issues. He came out in support of protests against the controversial demolition of the National Theatre in Tirana last year, and several days ago he called for the protection of the River Vjosa in Albania, which environmentalists claim is threatened by the building of hydropower plants.

Vetevendosje MPs have also joined protests in Lezha in Albania against the construction of hydropower plants.

Kurti and his colleague’s visit to Albania came three weeks after his government came to power, and before he has even laid out his domestic programme for governing.

Their visit also happened at a critical time when their own country was facing a rise in coronavirus infections and the lowest rate of vaccination against COVID-19 in the Balkans.

So far, via the COVAX programme, Kosovo has managed to secure just 24,000 doses of AstraZeneca vaccines, which will only be enough for healthcare staff, some elderly citizens and people with chronic diseases.

Albania has helped Kosovo by vaccinating more than 500 of its medical staff and the government in Tirana has expressed readiness to vaccinate Kosovo’s teachers. However, Kurti’s administration refused the offer as Albania only offered Chinese vaccines.

As well as being a refusal of much-needed vaccines, this was seen as a rejection of Albania’s Prime Minister Edi Rama, amid Vetevendosje’s support for election candidates who oppose Rama’s ruling Socialist Party.

Albania’s vaccination campaign has been successful so far, with more than 257,000 citizens jabbed, or nine per cent of the population. On the other hand, Kosovo has vaccinated fewer than 10,000 of its citizens and apart from the COVAX supply, has not managed to purchase a single dose.

While finding time to get involved in the election issues of another country, Kosovo’s prime minister has not made public any plan or long-term strategy for coping with the pandemics or securing more vaccines.

Kosovo and Albania are natural partners and I am one of those people who have advocated for more integration and cooperation between the two countries. However, the method that Kurti has chosen in his relations with Albania will only deepen divisions and will not result in more cooperation.

Kosovo’s prime minister should not consider his Albanian as a political opponent. Getting involved in Albania’s elections to endorse three candidates will rightly irritate many Albanians, just as Kosovo Albanians have been irritated when Albania’s prime minister has spoken in their name.

Kosovo’s ruling party getting involved with the opposition in Albania puts in jeopardy the relations between the two countries. From 2000 onwards, Kosovo and Albania have reached 66 agreements, and although many of them have not been implemented, a state of affairs in which Kosovo’s prime minister and his Albanian counterpart become rivals risks unnecessary reverses.

Kurti and Vetevendosje should focus on managing both deadly pandemic and its economic consequences – securing more vaccines, planning an economic recovery and drafting a governing programme – instead of meddling in the domestic affairs of another country in these difficult times.

After the Albanian elections on April 25, the governments of the two countries must meet in order to coordinate the vaccination of both states’ citizens instead of wasting time on political rivalry.

Agron Demi is a senior researcher at the GAP Institute and a regular columnist for  Prishtina Insight.