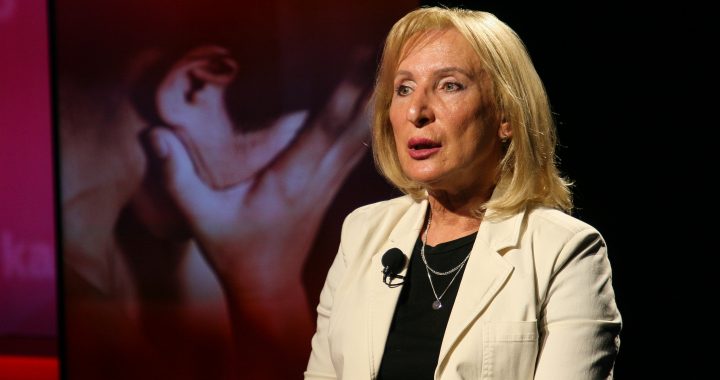 Special Prosecutor Drita Hajdari told BIRN that if survivors of sexual violence during the 1998-99 war agree to come forward and testify, she will deal with their cases herself.

On Monday, the Basic Court of Prishtina sentenced a former Kosovo Serb policeman, Zoran Vukotic, to ten years in prison for rape and for participating in the expulsion of ethnic Albanian civilians during the war in Kosovo in 1999.

The ruling was called historic because it the first time someone had been convicted in Kosovo of sexual abuse during the 1998-9 war.

In an interview on Tuesday with BIRN Kosovo’s ‘Kallxo PerNime’ television programme, the head of Kosovo’s Special Prosecution, Drita Hajdari, urged more people to report charges of rape during the war, pledging to deal with their cases in person.

Hajdari personally dealt with the Vukotic case after his victim appeared at the Special Prosecution offices and insisted on meeting her. “It was a random day at work, I was in my office and the security team informed me that a woman wanted to meet me,” Hajdari recalled.

“She confessed … a bitter story she experienced during the war in Kosovo, about rape,” Hajdari added.

“The enemy used it [rape] as a strategy of war, by hitting the pillar of our society, the woman,” she said, adding that no punishment is enough compensation for such suffering.

There were numerous cases of sexual abuse during the Kosovo war but only three women have told their stories publicly so far.

The first, Marte Tunaj, who died in 2016, was the first Kosovo Albanian to testify about being raped in the war, in her case by a Serbian paramilitary, Milos Jokic. Jokic was sentenced to 20 years in prison in 2013 by the EU rule-of-law mission, EULEX.

Hajdari said that the prosecution currently has 50 wartime rape cases on its files. But no indictments have followed due to its inability to file an indictment in the absence of the suspect. “The investigations have ended,” she said.

Shyhrete Tahiri-Sulimani, one of three war rape survivors who have told their stories publicly. Photo: BIRN.

Hajdari pledged that victims’ identities will be protected if they testify, and urged them to report cases of rape during the Kosovo war, even if they lack their family’s support and have to face the social stigma that still accompanies wartime sexual abuse.

“Without the support of the family, victims do not have the certainty and courage to report these cases because most of them are not ready to face the past, due to fear and the stigma from society and the family,” Hajdari said, clarifying the importance of anonymity in such cases.

The victim had read in the media that the trial of Zoran Vukotic had started, but had not been invited to testify at Mitrovica Basic Court.

Hajdari explained that, after checking the database, she confirmed the woman was “nowhere, no statement, no trace that she … figured as an injured party or witness”.

The victim claimed she had reported the rape claim to the UN mission in Kosovo, UNMIK, and to the EU rule-of-law mission, EULEX, but never received any written acknowledgement of her report.

She also claimed that at least five other women were also raped on the same day.

“To encourage other victims to report their cases”, Hajdari explained, victims are registered in the database only by their initials. “There is no chance” of their identities being discovered, she insisted.

“Due to the potential consequences these victims can face, in the early procedure of the investigation I request from the court an order of anonymity,” Hajdari added. “A code is given to the injured party under which she has appeared in the case files during the trial.”

Moreover, “in the indictment I ask for the trial not to be public, the public is dismissed and the victim is made more comfortable”.

Vukotic, an employee of the local court in Vushtrri, served in the Kosovo war in the reserve police of the Serbian Interior Ministry.

On May 22, 1999, together with other members of the Serbian military, paramilitary and police forces, he took part in the expulsion, rape and torture of Kosovo Albanian civilians.

At the town’s Muslim cemetery, Hajdari recalled that Serbian forces divided up citizens and put them in trucks and sent them to a prison.

“The citizens who were left there were made to queue in front of a two-storey house,” Hajdari said, explaining that “the women were taken in. They put them in the house and raped them.”

The victim who testified against Vukotic was pregnant with twins at the time, and was holding one child in her arms.

“At the hallway, the child she was holding in her arms was taken from her … and Vukotic dragged her [the mother] to the second floor where, with the assistance of another person, also a policeman, he violated her in the most savage way possible.”

Due to the rape the victim suffered a miscarriage after a few months and lost both twins, Hajdari said.

A large backlog of cases

Hajdari said cases of wartime massacres are prioritised by the Special Prosecution due to the big backlog. She is trying to find legal loopholes to bring old cases back to the court.

“We inherited 900 war crime cases from EULEX and 2,000 files for the missing persons,” she said. They also accepted other cases, and so currently have 1,000 cases, which is why they have prioritised some over others. “Sexual abuse cases and larger massacres” from the war are currently being prioritised, she explained.

Asked about potential trials for massacres in Gjakova and the infamous Recak massacre of January 15, 1999, when 45 Albanians were killed, Hajdari said: “They are among our priorities and are in progress,” adding that a large amount of evidence exists in these cases.

Hajdari has also taken the case of Krasniqi Goodman from the archives, but has not been able to find a legal reasoning for a retrial. “The procedure in her case has finished,” Hajdari said, though she believes the case could still be tried “in the context of superior responsibility”.

Time and space are the biggest obstacles

Together with the obstacle of having very few prosecutors, the Special Prosecution also faces the problem of time, due to the crimes having occurred 20 years ago, and the problem of space, because the perpetrators are mainly in Serbia.

Due to the ‘frozen’ conflict between Kosovo and Serbia, the two do not collaborate on war crime trials.

“War crimes have taken place in Kosovo, the witnesses are in Kosovo, as well as the evidence,” Hajdari said. However, the perpetrators are far from Kosovo. “Most are in Serbia and Serbia does not cooperate with us,” she said.

Kosovo does not cooperate with Serbia either, because it believes that its judiciary is the relevant authority to try crimes that happened on its territory, she explained.

She gives no further information on cases when witnesses from Kosovo have testified in the courts in Serbia.

The main challenge, according to Hajdari, is time. “Many witnesses have died, while some have problems recalling long-ago events,” she said.

Nevertheless, she urged victims to report to the Special Prosecution, or contact her directly, particularly in sexual abuse cases. “The second option is to contact me through non-governmental organisations,” she concluded.