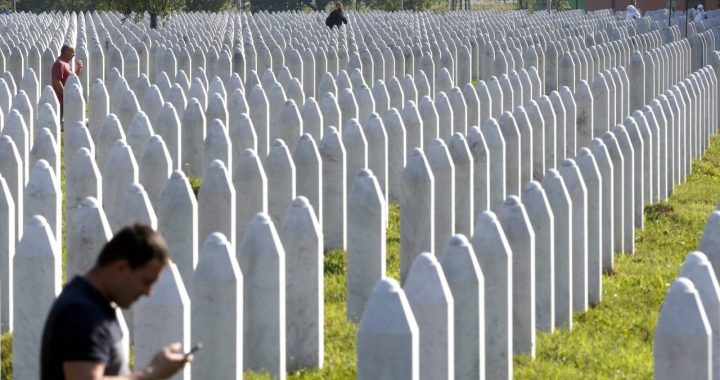 Weeks after parliament in Montenegro passed a similar resolution, Kosovo's parliament has adopted its own resolution condemning denial of the 1995 Srebrenica genocide committed by Bosnian Serb forces.

Kosovo MPs adopted a resolution on Wednesday officially recognising the 1995 Srebrenica massacre as genocide, only days before the 26th commemoration of the slaughter of Bosniaks by Bosnian Serb forces.

The draft resolution was presented to parliament by an MP representing the country’s Bosniak community, Bahrim Sabani, who said that the crimes committed by Bosnian Serb forces in Srebrenica “represent genocide as described by UN Convention on Prevention and Conviction of Genocide Crimes”.

Kosovo Prime Minister Albin Kurti welcomed the resolution, calling its adoption a “noble and proper act”. “But above all it is an act on behalf of our universal humanity and our with to live peacefully and in justice,” Kurti said.

The six-point resolution condemns “any tendency to intentionally and publicly deny the Srebrenica genocide with the aim of denigrating the victims and hiding the motives of the crimes committed”.

The Kosovo parliament “calls on all states to make all necessary attempts to bring to justice all those who are responsible for planning and committing the genocide in Srebrenica,” the resolution said.

In July 1995, more than 7,000 Bosniak men and boys from Srebrenica were killed in a series of massacres by Bosnian Serb forces, and over 40,000 women, children and elderly people were expelled – a crime that was classified as genocide by the International Criminal Tribunal for the Former Yugoslavia, ICTY, and the International Court of Justice.

Adoption of the resolution by the Kosovo parliament comes three weeks after Montenegro’s parliament adopted its own resolution on the genocide.

Speaking in Belgrade after the adoption of the resolution in Kosovo, Serbian President Aleksandar Vucic said: “I told you that after that [Montenegro’s resolution] there will be a flood of the same resolutions against Serbia” in parliaments in the neighbourhood.

“So they all make clear statements and expressions that Serbs committed the genocide, to show their ostensible commitment to good neighbourly relations, but in fact to strike a blow at Serbia,” Vucic told the media during a visit to a hospital in Serbia’s capital. “Those resolutions will continue,” he added.

“I believe that we can avoid that in some regional parliaments because of good friendly relations, and in some we will not be able to avoid it; they will continue their political maltreatment of the Serbs,” Vucic said. “Unfortunately, it will be written in history that Podgorica surpassed Pristina on that issue”, he added, referencing the Montenegrin capital.