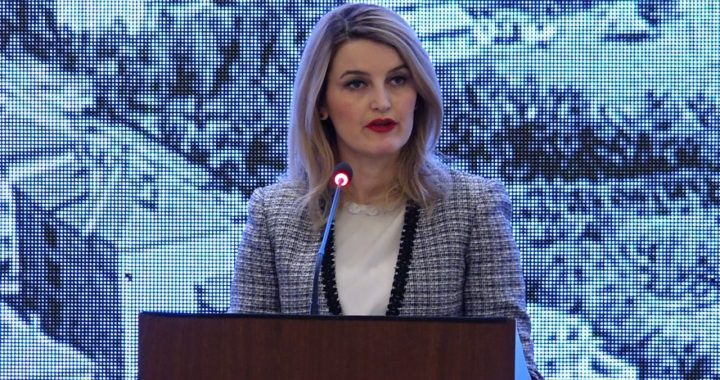 Former European Integration Minister Dhurata Hoxha faces charges of abuse of office over a contract signed with a French PR company which, BIRN discovered last year, was hired to promote territorial exchanges as a solution to the dispute with Serbia.

Kosovo’s Special Prosecution has filed an indictment against former Minister for European Integration Dhurata Hoxha and four current and former officials of the ministry over a contract that saw budget money spent on a Paris-based PR company that promoted Kosovo’s “territorial modification” as a way to solve the Kosovo- Serbia dispute two years ago.

In a press release issued on Wednesday, the prosecution did not provide details of the indictment but specified that Hoxha and four others are suspected of abuse of office.

In a statement to BIRN, Dhurata Hoxha said she was not informed about the indictment.

In May 2020, BIRN discovered that the Ministry of European Integration allocated 168,000 euros on hiring French company Majorelle PR & Events in a contract first signed and negotiated in 2018 by Hoxha, then Kosovo’s European Integration Minister, from the Democratic Party of Kosovo, PDK, in the PAN coalition government led by Ramush Haradinaj. It was extended in March 2019.

The company did not reply to BIRN’s request for comment at that time.

The documents obtained by BIRN showed that the company was tasked among other things with shaping European opinion in favour of Kosovo’s “territorial modification” as a means to achieve a Kosovo-Serbia peace deal.

The border change option – which triggered sharp reactions both inside and outside Kosovo – was first raised by former Kosovo President Hashim Thaci, who is now is in the Hague waiting trial after the Specialist Prosecution filed an indictment against him and three other former members of the Kosovo Liberation Army, KLA, for war crimes and crimes against humanity allegedly committed during Kosovo’s 1998-99 war.