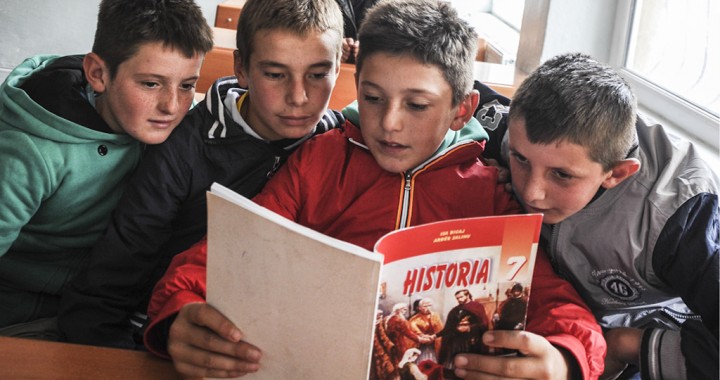 Textbooks in Kosovo Binned or Burned at Cost of Millions

With each school year that passes, Ilire Berisha’s attic looks more and more like a library, filling up with the textbooks given to her daughter for free at the start of each school semester in Kosovo.

Abide Mustafa has a different solution for the books that become obsolete for her grandchildren when they move to the next grade. “When they finish, the textbooks are thrown in the trash,” Mustafa said.

It comes as news to both women that, under a 2012 law in Kosovo, they are obliged to return the often tattered and torn textbooks to the school for the next generation of pupils. They are not alone.

Across Kosovo, textbooks are being discarded or destroyed because of a failure to implement the law, teachers and education officials say, costing the cash-strapped state millions of euros per year to reprint them.

“It’s very good that they’re giving them out for free,” said Mustafa, whose grandchildren go to primary school in the capital, Prishtina. “But we never return them, because their teacher never told them they should.”

Berisha agrees: “I was never told these textbooks have to be returned,” she told BIRN. “I put them in boxes and keep them in the attic.”

The miscommunication appears to be symptomatic of what critics say is years of disorder and waste in school supplies.

While some headteachers report a shortage of books, a 2014 report by Kosovo’s General Auditor’s Office said thousands of textbooks worth around half a million euros were languishing in school storerooms undistributed.

“We have plenty of unused books in stock,” the report said. An inspection of schools revealed that “equipping students with free textbooks, using and preserving them, is not being respected,” it said.

Adem Ajvazi, director of the Dituria primary school in the Podujeve region north of Prishtina, says his school suffers from a shortage of books. He admits to not obliging parents to return their textbooks, saying “they get damaged because the paper is very poor,” and simply orders new ones.

“For the last three years we’ve had a pronounced lack of books,” Ajvazi told BIRN. “We don’t get supplied with the amount we request.”

Faton Fetahu, an aide to Education Minister Arsim Bajrami, rejected the criticism, saying progress has been made since the creation by Bajrami in October 2015 of a Council of Experts to bring order to the printing and distribution of textbooks.

He said stocktaking by the ministry last year “went extraordinarily well” and had cut stockpiles to some 235,000 books.

“We’ve received real evaluations and therefore managed to save thousands of euros,” Fetahu told BIRN. “We’ve started using the stocks and MEST [Ministry of Education, Science and Technology] has sent books based on real needs.”

The quality of the material used, he said, “will be addressed this year with the publication of new textbooks.”

Asked by BIRN for the sums spent on printing new books each year, Fetahu said he had been unable to find them. But an education ministry official, who declined to be named, showed BIRN the figures paid to between two and four printing houses each year. The sums involved shot up after a previous government in 2008 ordered that textbooks be given to students for free.

In 2008, the budget for printing was just over two million euros in a country of some 1.8 million people with a budget of around 1.7 billion euros. In 2009 it hit more than nine million, peaking at over 10 million in 2012.

In March this year, Education Minister Bajrami told parliament’s Education Commission that his ministry had spent almost 8.5 million euros on printing new textbooks for the current school year. Shpejtim Bulliqi, a member of the co-ruling Democratic League of Kosovo party, told the Commission that discussions were underway to cut the spending in half.

Fetahu told BIRN that the ministry would soon come out with a strategy to convince parents to return the used textbooks as per the law. But he did not elaborate or give a timeframe.

Meanwhile, some school directors are taking matters into their own hands, collecting tatty textbooks from parents and giving them to private recycling companies.

“By themselves, schools are giving the [recycling] company the textbooks, and the company in return gives them sport equipment like footballs, basketballs,” Nexhmi Rudari, the deputy mayor of the Podujevo municipality and former head of the local education department, told BIRN.
One of the recycling companies is owned by Xhevat Dervishi, who told BIRN he was doing a public service. “It’s better to recycle those books than burn them and pollute the environment.”