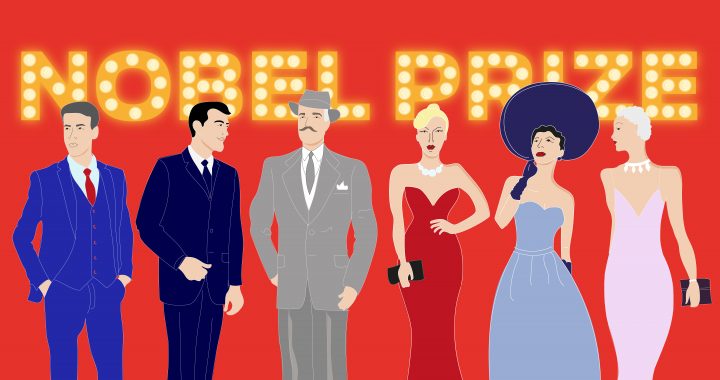 The artistic genius as a villain

We shouldn’t question why Peter Handke won the Nobel Prize, we should question why we care about this outdated, Euro-centric institution and why the artist must speak for all of humankind.

There are many problematic issues around the concept of the Nobel Prize. It was instituted by the will of Alfred Nobel, a Swedish businessman, chemist, engineer and philanthropist, making it a dubious organization which needs to be questioned in many aspects.

Ironically, the Nobel Prize Museum is located in the former Stock Exchange Building on the northern side of Stortorget square in Gamla Stan, Stockholm’s old town. At the Museum, among excerpts that depict Alfred Nobel’s legacy, there is a black board titled ‘Alfred Nobel in the Laboratory’, in which he is quoted speaking about the patent application for his most famous invention: “I am the first to succeed in transferring these substances from the realm of science to that of industry.” He was referring to components of dynamite. This alone is enough to demonstrate his profit-oriented motivations.

The wealth inherent in this institution becomes even more visible when viewing images of the luxurious Nobel prize dinner, served at the Stockholm City Hall and attended by members of the Swedish Academy, laureates, and royal families. Next to the dinner table, in a posh glass box, the headscarf that Malala Yousafzai wore during her memorable UN speech lays folded, brightened by artificial light.

Pakistani activist Malala won the Nobel Peace Prize for her struggle against the suppression of children and young people and for the right of all children to education. I find the juxtaposition of her headscarf with the dinner table somewhat disturbing, as well as revealing about the domination of western supremacy towards the third world, and its widely spread roots in the Swedish Academy. The Academy is often mistakenly considered as having the most angelic of traits, and as guardians of education rather than being examined for its social privilege and sketchy political connections.

In October, it announced the winners of both the 2019 and 2018 Nobel Prize for Literature, due to last year’s postponement following a crisis sparked by allegations of sexual harassment and assault. The Academy then began the process of reconstituting its committee and making changes to the process of selecting Nobel laureates, although what has been achieved in the field of literature leaves much to be desired.

According to the Swedish Academy, Olga Tokarczuk, who was awarded a delayed prize for literature for 2018, “constructs her novels in a tension between cultural opposites; nature versus culture, reason versus madness, male versus female, home versus alienation.”

I find it hard to believe that such a high institution would trivialize the Polish writer’s work to troublesome binaries that feminist linguists, post structuralists and phenomenologists have been deconstructing since the middle of last century. It is exactly these black and white descriptive attributions that lead to the social construction of divergence between ‘I and the other’ and allow for privilege to emerge.

On the other hand, Peter Handke’s “literary explorations of the periphery and the specificity of human experience” and his literary contributions as well as literary innovations may be disliked and immoral, but stylistically speaking, they can not be denied.

What is to be questioned here is the contradiction that the Nobel Prize Committee has provoked, as it officially proclaims itself as awarding those who have given “the greatest benefit to mankind.”

Even this exclusive and misogynist statement, among many other troublesome connotations, is generalized and produces an expectation that is oftentimes interpreted within idealistic terms. If we decide to be slightly more realistic, it is helpful to think today in terms of conflicting interests, power structures and domination and forget about the unified idea of human-kind, particularly due to the need to include our environment and the other-than-human in the discourse of viewing the global situation we are in.

History is filled with morally disturbing people (mostly white middle class men) who were incredible artists. From the open anti-semtism of Wagner, Byron, Flaubert, Ezra Pound, and T.S. Eliot to the misogyny of Nabokov, Picasso, and Hemmingway. The ‘Me Too’ movement also directly implicated Kevin Spacey and Louie C.K with pedophilia, rape and sexual assault, to name just two.

What it is important to investigate is what parameters the evaluation of their art unveils about the connection between art and politics, and deconstruct the glorified image of the artist as a genius or a protector of truth. Anything but one truth!

Ultimately, the Nobel Peace Prize organization needs to be deromanticized from the perception of it as a pinnacle of knowledge, and viewed with a critical eye for its monopoly on stamping value on literature and science.

There has been an almost desperate call from the Kosovar and Albanian literature circles to have Ismail Kadare awarded the prize, but mainstream European literature is generally not much interested in stories from the Balkans at this point, nor stories from war zones.

Instead, there are calls for “making space for different reasonable interpretations” and “the interchange, notwithstanding sharply diverging views on important matters”, two arguments used as justifications by the Nobel Committee for Literature in their generically produced letter issued to both the Committee of Literary Publishers from Bosnia and Herzegovina, and the Academy of Arts and Sciences in Kosovo, both of whom expressed their disappointment with the Nobel Committee’s decision to award Handke and requested the withdrawal of the title.

Perhaps it is more valuable and eye opening to instead focus on smaller Nordic artistic initiatives such as that of visual artist Minna L. Henriksson and the archaeologist Fredrik Svanberg, who confront the topic of race science in the Nordic countries in their collaborative, multidisciplinary project: “Unfolding Nordic Race Science.” Among other issues, Herinksson and Svanberg’s work draws a line between academia and research done to examine the ‘Germanic Arian Nordic Master race’ at the turn of the twentieth century. Alas, the Kosovar citizen can not freely travel to Europe without a visa and needs to be satisfied with findings on the internet.

In the last two decades, the Kosovar society, as with most of the Balkans, has been repeatedly served a brainwash mantra named European Integration which instead of helping focus energy on fixing the country for its own sake, has created a longing for a future that is yet to happen and a desperation for an unreachable treasure.

Unless this mindset changes, we will keep being frustrated and shocked over decisions like that to award Peter Handke the Nobel Prize for Literature, and offer proof to Europe once again of our hot blooded and polarized nature. How paradoxical is that?