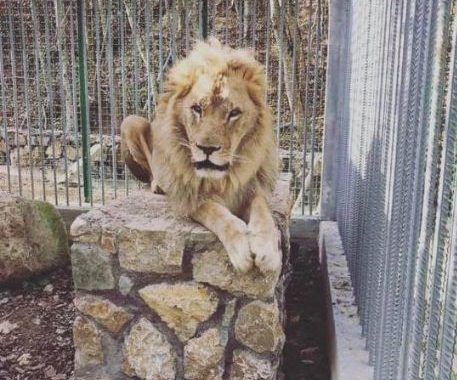 Animal rights groups and the Kosovo Food and Veterinary Agency have confirmed “unacceptable” reports that a restaurant in Gjilan is keeping a lion in a cage outside its premises on Wednesday.

Reports that a lion is being kept in a cage outside a restaurant in Zheger, a village in the Municipality of Gjilan on Wednesday, have been met with outrage from animal rights organizations in Kosovo.

“This poor wild animal is being held in a very small cage just to please people with no compassion for animals,” said NGO United for Animals in a statement on Facebook. “Not only is this inhumane, it is also illegal.”

No information regarding the exact whereabouts of the lion, or its welfare, have been made public so far.

The Kosovo Animal Rights Foundation also responded to the news, stating that the situation is “unacceptable” and that it is taking steps to help the lion.

“The lawyers of the Animal Rights Foundation will review the laws in force and we will act as soon as possible in the best interests of the lion being kept there in a small cage,” reads its response on Facebook. “Keeping animals in this way, importing them (probably illegally) shows just how weak the state is in monitoring and handling such situations.”

The foundation hopes that the situation will reach the attention of international organizations operating in Kosovo in order to rescue the lion safely.

According to reports from media organization Koha Ditore, both Kosovo Customs and the Kosovo Food and Veterinary Agency, KVFA, were unaware that a lion had entered the country.

“We have not registered it as a regular import, and it has not entered through our controls at the border,” said KVFA Spokesperson Lamir Thaci to Koha Ditore. “They basically have to get permission from us through import permits, and in this case, they haven’t even applied for a permit, and we have no evidence that the lion passed the border.”

Both agencies pledged to initiate investigations into the case.

The CEO of the Animals Rights Foundation, Elza Ramadani, told Prishtina Insight that there have been reports of other wild animals, including chimpanzees, being present at the restaurant.

“We have heard that the Mayor of Gjilan [Lutfi Haziri] and other representatives from institutions attended the opening of the restaurant, and no one reacted to the animals in captivity,” she said. “We are trying not to react too emotionally and are working with our lawyers to devise the best plan of action with professionalism, so that we can report the situation to the relevant courts or institutions.”

The mistreatment of lions and other exotic animals has also been reported this year in Albania.

In May, three lions were rescued from a ‘private zoo’ in the city of Fier, 60 kilometers south of Tirana. The lions, named Lensi, Bobi and Zhak, were taken from Albania and sent to the Netherlands to receive treatment for various physical and behavioral problems they were facing. Zhak died from severe organ damage in July as a result of the mistreatment he faced.

The mistreatment of bears and keeping them as pets has been a serious problem in Kosovo. In 2013, the Ministry of Environment decided to target the phenomena of keeping ‘restaurant bears’ throughout the country. According to Austrian NGO Four Paws International, restaurant owners would buy bears from animal traders to be used as a tourist attraction, locking them in cages outside restaurants as a way to attract clientele.

The government was able to rescue 20 bears from squalid conditions around Kosovo with the help of KFOR troops. However, almost all the bears rescued suffered from long term physical and mental health problems as a result of being kept in captivity, and could not be released into the wild due to their domestication.

In response to the problem the Bear Sanctuary Prishtina was established, a 16-acre national park just outside the capital that opened in Spring 2014 and run by Four Paws International.

However, keeping bears in captivity remains to be an issue in Kosovo. In May this year, it was discovered that a national park ranger employed by the Ministry of Environment and Spatial Planning was holding a bear cub “in shocking conditions” in his basement for months.

Lions are almost predominantly native to sub-Saharan Africa, and have been listed as a ‘vulnerable species’ by the International Union for the Conservation of Nature, IUCN, since 1996. Despite having no natural predators, the population of lions has dropped by 40 per cent in the last 25 years as a result of shrinking habitat and urbanization, according to the World Wildlife Foundation.