The wounding of two young  Serbs in Shterpce has raised new concerns about ethnic tensions in Kosovo. Prishtina Insight’s editor brings her own perspective as a passer-by, a few minutes before the shooting.

The attack on two young Serbs in Shtërpcë by an off-duty member of the Kosovo Security Force, KSF, on January 6 came as another shock for the public in Kosovo.

At a time when ethnic tensions in the north had been high since December, due to the barricades erected there, an attack that was suspected of being ethnically motivated risked escalating the situation to another level.

While politicians in Belgrade rushed to consider it an ethnically motivated attack, the defence lawyer of the suspect stated that the attack was in self-defence.

The fact that the suspected attacker was a member of the KSF made the situation even more complex.

It rarely happens that one witnesses such events in the first person, but it so happened to me that day.

This is my reflection of the experiences of that day, and intentionally comes after the fog and the initial hecticness of the situation have passed.

What is the truth of the January 6 incident?

The road from Brezovica, the main skiing centre in Kosovo, to Prishtina passes through Shtërpcë, a town populated mainly by members of the Serbian minority.

Shtërpcë has been recognised for years as a unique example of ethnic cohabitation and cooperation on the protection and destruction of nature.

Both Albanians and Serbs from the villages of Shtërpcë together organized numerous protests for six years to protect their local river from the development of hydropower plants.

Again, together, local Albanians and Serbs took part in the destruction of Sharri National Park in the area of ​​Brezovica, through illegal constructions of hundreds of villas.

A police action last year resulted in the arrest of several people, including the ex-mayor of Shtërpcë and the former Secretary of the Ministry of Environment.

When I pass there, I don't feel much different from when I pass any other roads in the country. But that day was different.

Arriving in the village of Gotovushë, we had to stop in the middle of the street.

A group of about 20 young Serbs, many dressed in camouflage pattern clothes, came out on the main street. In their hands they held dry branches, used as symbols of celebration of the Orthodox Christmas.

They were also holding a banner with the map of Kosovo and the flag of Serbia inside it, with the text: “There’s no giving up” in the centre of the flag. The same flag was shown in the north of Kosovo, when local Serbs barricaded the streets in attempts to reject the imposition of Kosovar license plates. 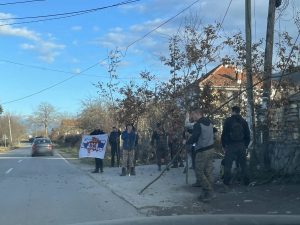 The view of the street in Shterpce, moments before the shooting of the 6th of January happened. Photo: Blerta Begisholli, BIRN.

After a demo lasting about two minutes in the middle of the road, where they blocked cars from both directions, they moved to the right side of the road, and continued to shout at cars passing by.

It was not clear what they were saying.

My journalistic instinct prompted me to immediately take some pictures but I quickly removed my phone, so that I would not be seen. The situation did not feel safe.

I put the phone down quickly, and continued driving. 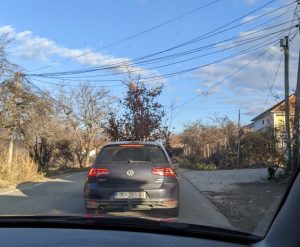 The view of the street in Shterpce, moments before the shooting of 6th of January happened. Photo courtesy of another eyewitness.

Remembering recent events in the north of Kosovo, where criminal gangs had blocked the roads and provoked an escalation of the situation, and in some cases had attacked journalists, I was afraid the same could happen there.

A few minutes later I reported to the newsroom about what I had seen, and it wasn't long before the police issued an announcement that an attack had taken place.

It turned out that the photo I had taken captured the moment of interaction between the group of youngsters [on the right] and the suspected attacker [the Volkswagen car on the left]. 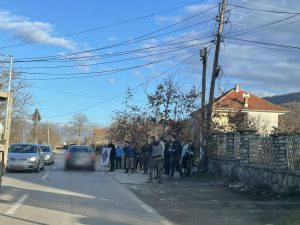 The view of the street in Shterpce, moments before the shooting of 6th of January happened. Photo: Blerta Begisholli, BIRN

From what the Prosecution described in its documents, the attacker continued on his way towards Brezovica, and after not being allowed to go there, because another group had blocked the road, he turned back. It was on his way back when he was suspected of having shot in the direction of the first group of youngsters, seen in the photo.

The case raised security concerns in Pristina and not only there.

It seemed like an ideal case that could be used by extreme right-wing groups to escalate the situation, similar to the trigger cases that started new crises in the former Yugoslavia.

While Kosovar politicians made sure to promptly condemn the attack, and called it an isolated incident, Serbian politicians did not hesitate to send messages of ethnic hatred along with the news. The fact that the suspected attacker was arrested within two hours of the incident might have helped the situation to remain under control.

The case "will be treated according to the regulations and laws we have in force in the Ministry of Defence and Security," Kosovo’s Minister of Defence, Armend Mehaj, said, adding his deep regret over what happened and wishing the injured a speedy recovery.

"Cases like this are isolated, but as such they dare not happen," he said. "The Ministry of Defence and the Security Force of Kosovo remain committed to serving our citizens regardless."

For the Serbian government, it was an attempt at a bloody Christmas.

"They were shot at while wearing Christmas clothes. Someone wanted to give us a bloody Christmas," said Petar Petkovic, head of Serbia's government office for Kosovo, on Twitter, referring to Serbia's Orthodox Christmas that is celebrated on Jan. 7.

The message of Serbian Prime Minister, Ana Brnabic, was similar.

"This is Stefan. He is 11 years old. He has been shot today, on the Orthodox Christmas Eve, just because he is Serbian. Along with him, another young Serb, Miloš, who's 21, has been shot at. Everyone should spare 2 minutes to look at the video. This image is a true face of Kosovo*." said Brnabic.

How did the police fail to prevent this?

Less than a kilometer away from the place where the group gathered on the main street [towards the direction of Brezovica], I saw the Shtërpcë police.

The Kosovo Police’s composition represents the actual composition of the ethnicities in the areas it operates in, so for Shtërpcë the majority of the police forces are also Serbs.

They stopped three or four cars with open trunks, filled with dry branches, in what looked like an attempt to prevent this group from joining the rest of the youngsters.

If the police was aware of this gathering, and prevented one small group from joining it, why did they not send patrols to provide security for the rest of the group as well, who were celebrating on the main street only meters from where the police patrols were?

This event revealed the truth about the unpreparedness of the security institution in preventing these types of incidents.

For someone even slightly familiar with the history of this part of Europe, it is clear that these types of incidents are not something that can be ignored with ease.

Both the Kosovo police and the KSF should prepare better operational plans for such events.

Better prevention would be preferable to fast reaction.

by Bubulina Peni
Next: News