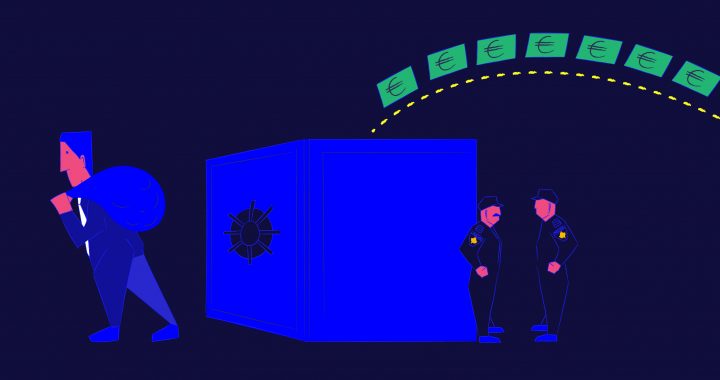 The theft of two million euros from the Treasury is not an isolated case, but a practice within public institutions that has been established over two decades through impunity and incompetence.

Last Thursday I had deja vu. The sensational news of the theft of more than two million euros from the State Treasury was quickly followed by the theft of a 300-kilogram safe from the offices of the Food and Veterinary Agency. The stories were surprising, but not entirely new.

On February 10, 2000, the media reported that three unknown perpetrators had stolen the safe from the Dardania Bank. It was initially believed that the safe contained between 400,000 and 600,000 Deutschmarks, but by April Koha Ditore was reporting that two million marks had in fact been stolen.

The Dardania Bank was established through the donations of Albanians in the diaspora that provided funds to finance the parallel system created by Kosovo Albanians during the 1990s. At the end of the 1999 war, the Fund was left with over 50 million marks remaining, which are still unaccounted for.

According to UNMIK investigators looking into the theft, the robbers must have been employees at the bank.

Two years later, on April 30, 2002, UNMIK convened an emergency press conference, in which it was revealed that an UNMIK employee had managed to transfer about 3.7 million euros to Gibraltar over a period of just a few months.

The money was stolen from the budget of the Kosovo Energy Corporation, KEK, which had been allocated for the import of electricity. A few years later, a German court sentenced Jo Trutschler, the former managing director of KEK, to three and a half years in prison for ‘breach of trust and misusing an academic title.’

Just like 18 years ago, on October 21, 2020, the Ministry of Finance and Transfers called an emergency press conference in which Minister Hykmete Bajrami informed the public that a Treasury employee had managed to illegally transfer over two million euros to a private company.

The theft had occurred on October 9, 2020, through four transactions made within a period of just eight minutes. It was announced that Kosovo Police had managed to arrest a Treasury official, but not the owners of the company in whose account the Treasury funds had been poured, although one has subsequently surrendered to the police.

While the public was still taking in the news of the theft of over two million euros from the Treasury, just a few kilometres away from the Ministry of Finance and Transfers another robbery was taking place, with less sophisticated but no less effective methods – a 300-kilogram safe was stolen from the offices of the Food and Veterinary Agency, FVA. The police officer on duty has been suspended, but no arrests have been made thus far.

Thefts have even occurred in the most guarded rooms of Kosovo’s security institutions. In April 2009, the Evidence Room of the Kosovo Police headquarters in Prishtina was burgled. In addition to money and over 47 kilograms of heroin, it is believed that many investigation documents were also taken. Thirteen people were investigated in this case, but no one has ever been convicted.

Three years later, in April 2012, 25 kilograms of gold were stolen from the Peja Police Station. Six people were investigated, but, again, no one was ever convicted.

This tradition has continued right up to the present day. In February this year, the Kosovo Police were the victims of another theft, with firearms of various sizes stolen from the evidence room of the Police Station in Zubin Potok. The police officer suspected of the theft has fled the country.

Every day citizens read or hear about numerous abuses of public property. In the last week alone there have been numerous media reports on corruption cases, the suspected illegal gains from which exceed 100 million euros.

The day before the Ministry of Finance’s press conference, it was reported that Prime Minister Hoti was questioned by Kosovo’s Anti-Corruption Task Force prior to the Government’s decision to dissolve the agency. Hoti was a witness in the investigation of the signing of a dubious contract, which saw 53 million euros transferred to Bechtel-Enka.

The same day, the prosecution filed an indictment against the former Chief Executive of Kosovo Post and Telecom regarding the loss of nearly 10 million euros from an illegally terminated contract.

Other stories in the days since include one million euros spent on defending suspects at the Specialist Chambers in the Hague not being declared, misuse of the public budget on official lunches, and illegal payments to the Central Election Commission.

Corruption has also undermined Kosovo’s international standing. In February 2011, as Kosovo turned three, the high levels of corruption led American magazine Foreign Policy to label Kosovo a ‘Thugocracy.’ Since then, the EU Commission, through its annual reports, has repeatedly cited ‘endemic’ corruption as an obstacle to Kosovo’s overall reforms.

This is part of the reason that the news of two more large scale thefts barely made an impression on the citizens of Kosovo, who have become immune to shock over such incidents. Few believe that these cases will be tried and that the perpetrators will receive the punishment they deserve.

Both the finance minister and Prime Minister Hoti have stated that the two million euro theft from the treasury is an isolated case and that they bear no managerial or political responsibility.

However, for the auditors from the National Audit Office, NAO, this scandal will not come as a surprise. In many reports over the years, the NAO has identified and warned of irregularities in Treasury procedures. Unfortunately, for many years now, these reports are only considered as advisory to the institutions, and are not investigated by the judiciary.

In 2015, the GAP Institute examined the NAO’s reports from 2013 and 2014, and calculated that more than 110 million euros went through irregular procedures each year, close to 14 percent of the audited annual budget.

In its report for 2018, the NAO found that 11 payments the Treasury made did not comply with Regulation 01/2013, which governs the spending of public funds and outlines the procedure required. According to this regulation, a purchase request must first be made before funds are committed and a purchase order is processed – only then are the goods or services accepted. After receiving the invoice, the payment is then executed.

It thus follows that even if a treasury official had noticed an irregularity during the illegal transfer of over two million euros, it would likely not have been a cause for alarm. Dozens of previous transfers in which regulations have been violated have already passed through the system in recent years.

The NAO report on the Ministry of Finance for 2015 found that a contract extension with the Canadian company that maintains the software the Treasury uses was also conducted through an illegal procedure.

The contract was signed only by the director of the Treasury and not by the minister, while the Public Procurement Regulatory Commission was not notified and the terms of the contract were not specified. This is exactly the system which was used during the illegal transfer of over two million euros earlier this month.

In a 2018 NAO report on the IT systems used by public institutions, the NAO found that 70 percent of institutions lack IT policies and procedures, an IT strategy and a well organised IT department. NAO reports have also found a lack of coordination between treasury departments, and a failure to monitor IT standards across institutions.

To address some of these issues, in September the government appointed a National Coordinator for Cyber security, with NISMA’s Zafir Berisha hired for the role, despite the fact he has no experience in cyber security or IT systems. The day he was appointed, Berisha’s Facebook account was hacked.

Responsibility is not only for those that commit a crime but also those who fail to act to prevent it. There have been a number of recommendations to improve security around financial transactions, and, as a former finance minister, Prime Minister Hoti must be aware of this.

In this light, the theft of two million euros from the Treasury is not, as Hoti describes it, “an isolated case.” In fact, it is a crime two decades in the making, through incompetence, impunity and irresponsibility from public institutions.