It is high time the UN accepted responsibility for the lead poisoning of Roma camp residents back in 1999 and compensated them, say a group of Harvard researchers and Roma activists who have been tracking the case.

“Our rights have been stepped on, and we want justice.”  So said Roma victims of lead poisoning in Mitrovica last week, addressing the UN. For more than two decades, the United Nations has denied them justice for the severe and ongoing injuries they suffered in toxic UN camps after the war.

The UN should be the first to exemplify accountability for its wrongs, but in Kosovo it has utterly failed to live up to its own principles. It is time for that to finally change.

The UN’s responsibility for lead poisoning dates back to 1999, when it placed more than 600 members of the Roma, Ashkali, and Egyptian communities in camps next to the Trepca mining complex in Mitrovica, an area known to be contaminated by toxic levels of lead. The resulting lead poisoning led to the deaths of multiple camp residents and caused serious health effects that last to this day.

In 2016, a UN panel issued a landmark opinion, finding the UN Mission in Kosovo UNMIK responsible for violating the rights of the displaced.

The panel called on the UN to compensate victims and apologize. But six years later, the only body that has apologized is the panel itself – for its own role in the “sham” legal process that promised justice only to be disregarded by the UN.

We are a group of Harvard researchers and Roma rights activists who have been tracking the UN’s implementation of its own panel’s decision in the case.

Last week, we traveled to Pristina to release our findings in a new report. The report is the first comprehensive analysis of the UN’s continued failure to be accountable since its own body found it responsible.

Our report finds that the UN maneuvered its own accountability mechanisms to avoid responsibility for lead poisoning in Kosovo.

While the UN is legally required to provide effective remedies for civilians injured by its wrongdoing, it also enjoys sweeping immunity that prevents victims from seeking justice in national courts. As a result, victims are forced to seek compensation directly from the UN, which makes determinations about its own liability through a murky and discretionary claims process.

Victims first filed for compensation from the UN in 2006, but the UN sat on the claims for five years, only to dismiss them without a clear justification.

Meanwhile, in 2008 the UN established a new, independent advisory panel to decide its own responsibility for human rights violations while serving as the interim administration in Kosovo. 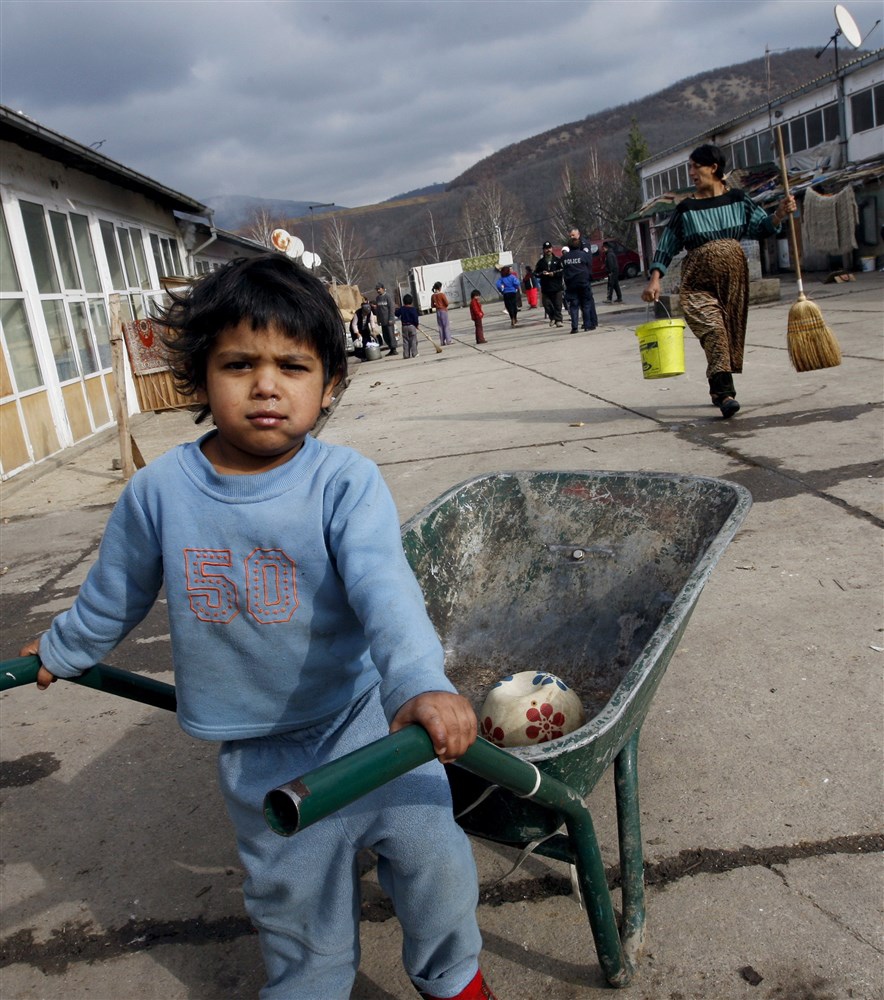 03 February 2009, photo shows Roma internally displaced persons at a camp in the northern part of the ethnically divided town of Mitrovica, 02 February 2009. The makeshift camp is located near a smelter that is part of the Trepca mining complex Mitrovica. Mining and metallurgic economic activities have a long history in Mitrovica and Zvecan municipalities of northern Kosovo. According to the study of WHO made in 2004, the overall population in Mitrovica has elevated levels of heavy metals, especially lead, but the samples from the three Roma Camps had the most alarming lead levels in the blood. According to WHO, a blood lead level of 10 micrograms per deciliter or below is acceptable. The measurements from the internally displaced persons camps were much higher than in the surrounding population and at levels which exceeded any region WHO had previously studied. Twelve children had exceptionally high blood lead levels, greater than 45 micrograms per deciliter. A World Health Organization official says Kosovo must close down lead-contaminated camps in the tiny Balkan country’s industrial north where about 100 Roma families live. The Roma have lived in the camps since their homes were torched just after Kosovo’s 1998-99 war with Serb troops. Photo: VALDRIN XHEMAJ/EPA

But when the victims turned there, the UN again thwarted justice by moving deadlines and changing procedural rules midstream that blocked the victims’ ability to pursue remedies in a timely manner.

Still, in 2016, the panel’s decision gave victims reason to hope that justice would be served. Six years on, that hope has been dashed by the UN’s complete failure to comply with the panel’s recommendations.

UN Secretary-General António Guterres’ sole response was to announce a voluntary trust fund benefiting Roma communities in Kosovo generally, without any specific attention to the camp residents and their ongoing injuries. The Fund depends on voluntary contributions from member states, and the UN has struggled to mobilize funding. In five years, it has received a single, solitary contribution of $10,000 from Qatar.

The experience of victims of lead poisoning in Kosovo reveals significant accountability gaps that must be closed for the UN to build legitimacy among vulnerable populations. But it’s not too late for the UN to deliver justice in this case.

That begins with reorienting the Trust Fund to address the specific injustice and provide compensation to the actual victims. Doing so would not only better address victims’ unmet medical and material needs but would also come closer to justice for the affected community.

It could also generate increased contributions from UN member states. At present, the vague ambit of the Fund does little to encourage donations, as many states already allocate money toward programming for the Roma community or minority populations writ large and rightfully question how this is different.

There is no excuse for UN inaction in this case. The victims’ injuries are well documented and the UN’s responsibility is well established. The only barrier to justice is political will.

To that end, the Kosovo government has an opportunity to step in. To further its commitment to the inclusion and equality of Roma communities, the government should call on the UN to adhere to the decision and recommendations of its own human rights advisory panel. Such a statement could go a long way toward galvanizing action among member states and UN leaders.

The need to provide effective remedies for the victims remains urgent. Last week, we sat with victims in Mitrovica who recounted the ongoing impacts of lead poisoning on them and their children. When we asked what they would like to say to the UN after all these years, their answer was clear: “We want justice for our children.”

If the UN is to meet the challenges of a modern world, its decisions should be driven by the values it seeks to protect. In Kosovo, living up to those values means doing what it should have done more than a decade ago: provide meaningful remedies for victims of lead poisoning.

The opinions expressed in the opinion section are those of the authors only and do not necessarily reflect the views of Prishtina Insight.