Untold story: 49 years of the University of Prishtina

From the roots of its establishment and the history of student resistance to post-war mismanagement, a historical exhibition traces the development of the University of Prishtina over the last half century.

From February 13 to February 20, a 49-year chronology of the history of the University of Prishtina “Hasan Prishtina” is being shown at the Modelarium of the Faculty of Engineering and Architecture.

“We hope that students, professors and other citizens as well will use this opportunity to come and visit the university,” said Shkelzen Gashi, curator of the exhibition.

“This exhibition gives a timeline of the most important things that the University of Prishtina has gone through in the last half century,” Gashi continued, “Events which the vast majority of citizens know very little about.”

Using Kosovo’s archives full of photos, newspaper articles and documents dating back the last 49 years, the exhibition tells the story behind the founding of the University of Prishtina and the five decades since its establishment.

The story begins with the well-known 1968 demonstrations that demanded the establishment of the University of Prishtina.

In 1968, Kosovo Albanians took to streets across the country to protest for the right to show and use the Albanian flag, and to demand the establishment of a university in the Albanian language. Calls for a “Republic” and the right to “self-determination” were prevalent throughout the demonstrations, dominated by Kosovo’s youth and prospective student body.

Turning then to the 1970s, the exhibition explores how the faculties of the university began to grow, and new programs were opening and expanding. Between 1970 and 1980, the number of students enrolled at the university soared from 7,000 to more than 40,000.

The faces in the university began to change over this decade – while in 1970 the number of Serb and Albanian students was almost equal, there were almost three times as many Albanians at the University than Serbs by 1980, 31,000 Albanians to 12,000 Serbs.

At the beginning of this next decade, the protests of 1981 marked an important time in the history of the university, with students and academic staff playing a key role in the demonstrations. Initially demanding better food in the university’s canteen, the protestors expanded their requests, echoing the calls of 1968 for a “Republic,” and unification with Albania, with photos illustrating the violence in the streets and banners held by protesters lining the walls of the exhibition.

Subtitled ‘the years of survival,’ the exhibition moves on to describe the drastic political changes of the late 80s and early 90s, where Albanian students and staff were expelled by the Serbian regime from university buildings. This marked a new phase in the university’s history, where the parallel system of education came into place, and private houses had to replace the university buildings where Kosovo Albanians were no longer welcome.

Pictures documenting the students’ protest of October 1997 are the last signs of the pre-war period in the exhibition. This protest is well-known as the last stand by Kosovo’s youth before the Kosovo Liberation Army, KLA, went public for the first time only a month later in November 1997. 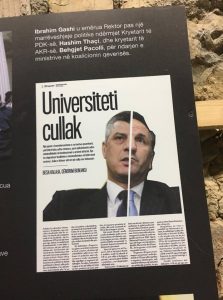 Moving into the 21st century, the scandals of university officials mainly fill the post-war section of the exhibition, featuring the misconduct of rectors of the University of Prishtina and political interference that Kosovo’s main higher education institution has suffered from since the end of the war.

For Shkelzen Gashi, the reception of visitors to the exhibition has been generally positive.

However, according to him, visitors have criticized the failure to include positive developments at the University of Prishtina from the post-war period up to the present day.

“In principle, they are right, but it has been very difficult to find positive moments in these two decades,” said Gashi to Prishtina Insight.

The exhibition will be open until tomorrow at 19:00 behind the main building of Ministry of Education in Prishtina.