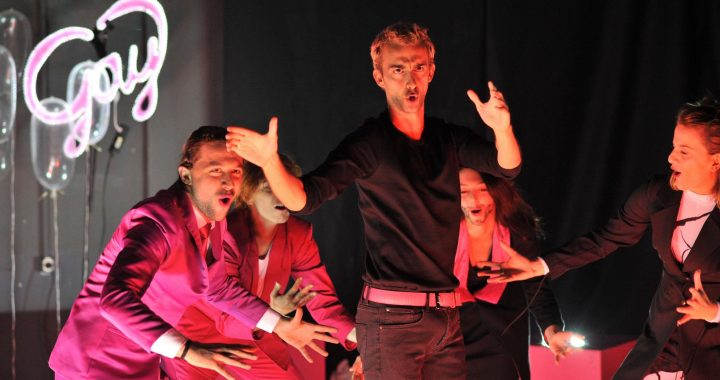 Playwright Jeton Nerizaj’s ‘provocative, politically incorrect’ theater production is still causing controversy as it plays once more in Prishtina on Tuesday before 55 Shades of Gay has its debut in the United States.

Written by director of the independent theater company Qendra Multimedia Jeton Neziraj and directed by Blerta Neziraj, 55 Shades of Gay hits the Oda Theater on Tuesday, February 19, before showcased for the first time in the United States.

The play, which is subtitled the Balkan Spring of Sexual Revolution, is a comedy centered around LGBTI politics in the Balkans, and first premiered in Prishtina in September 2017. It will be playing next month at the La MaMa Experimental Theater Club in New York from March 7 to 17. 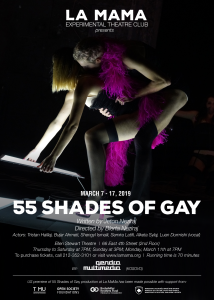 The arrest of a Ministry of Justice official last week in connection with homophobic comments made towards the cast of the play has made it clear that the politics that the play addresses is not historical.

“The performance poses the question: ‘Is sexual liberation possible in the Balkans?’” said Neziraj. “Local politicians in the Balkans try to manipulate and deceive EU officials; humanitarian mercenaries from international NGOs exploit the homophobic atmosphere to receive funds for made-up projects; while EU officials, using their superior financial and political position, try to subjugate everyone.”

In the play, a gay couple apply to get married in a fictional conservative, deeply homophobic provincial town. They make their request at a time when an Italian company has begun building a condom manufacturing factory in the town a project financially supported by the European Union. Intellectuals, artists, politicians, religious leaders and professional launchers try to stop the marriage from happening, despite the fact that same-sex marriage is technically permitted by the country’s constitution, which the Prime Minister signed according to a mandate from the EU.

Even in 2017, Neziraj felt showing 55 Shades of Gay in Prishtina was a gamble, albeit a gamble he was excited to take.

“We were of course wary of the public’s response. We designed a large poster which featured two men kissing, but the huge poster hung in front of the National Theater for about two weeks and nothing happened to it,” said Neziraj, who said they still felt the need to ask for a police presence on the opening night.

“When it came time for the premier, none of our fears came to pass. The play opened without incident, and this was a truly wonderful surprise, indeed a triumph – a sign that Kosovar society is emancipating.”

Neziraj explained that any time the play was being shown, the cast and people involved in the show would receive death threat and hate comments on social media, but never took them seriously.

However, that changed when the author of those comments was a known employee of the Kosovo Government.

“Such comments that call for hate and appeal for murder are always disturbing. However, these comments become even more disturbing when they come by a state official and are directed toward artists,” said Neziraj, referring to comments made on the Facebook page of Qendra Multimedia by Xheladin Krasniqi, who works for the Ministry of Justice, last week, which he said “should not have a place in the institutions of the Republic of Kosovo.”

Neziraj was shocked by the comments that came from the Ministry of Justice official, which called for the “beheading” of the cast members, but said that in general, these kinds of threats and intimidations became routine during the play’s run.

He thinks that, in a way, the inclusion of the audience in debating the content of a theatrical  performance is emancipatory in itself.

“It was widely debated on social media, and any time we show it, there is a wave of debate pro and contra LGBTI [comments], and it is fantastic when a theater play can trigger so much debate,” he said. “Debate about issues like this one of the play are always healthy, especially healthy for conservative societies like we have in the Balkans.”

55 Shades of Gay will be shown for the first time outside Europe in March, and Neziraj is looking forward to gauging the response of the US audience to a play that has caused so much controversy on its home soil.