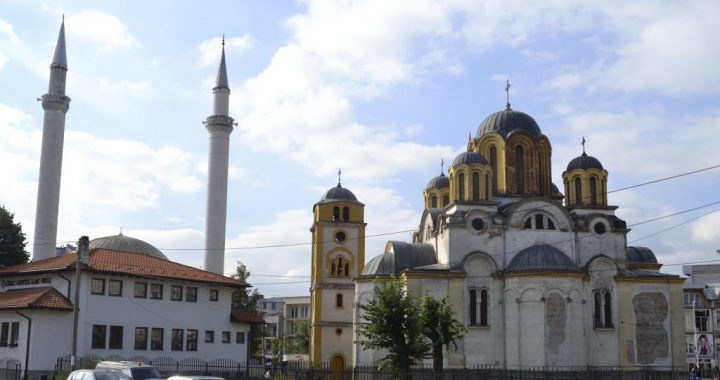 A Serbian Orthodox church and mosque in Ferizaj/Urosevac. Photo: BIRN.

US Warns of Rise in Incidents Targeting Kosovo Religious Sites

A new US State Department report on religious freedom said that incidents in which religious sites in Kosovo were targeted sharply increased in 2021, with over 80 incidents at Muslim and Orthodox Christian sites.

The US State Department’s 2021 Report on International Religious Freedom, published on Thursday, said that incidents targeting religious sites in Kosovo increased by more than 50 per cent last year compared to the previous year, citing police figures.

“Police classified two cases as incitement of discord and intolerance but did not give details. The BIK [Islamic Community of Kosovo] said incidents targeting mosques were likely financially motivated, citing, for example, a cash charity box in the Kacanik Mosque that was robbed several times during the year. According to the BIK, the thefts negatively affected their humanitarian activities,” it added.

The report said that unlike the Islamic Community of Kosovo, the Serbian Orthodox Church believes that incidents involving its property in the country were religiously and ethnically motivated.

“Because religion and ethnicity are often closely linked, it was sometimes difficult to categorise incidents as solely based on religious identity,” the report said.

The State Department’s report was issued a day after the Serbian Orthodox Church complained that Kosovo Police did not allow its priests to perform a liturgy in an unfinished church located on the Pristina University campus.

Pristina priest Stanica Arsic told KoSSev news agency that police prevented him and one of his colleagues from opening the door of the church on Thursday at around 4.30am.

“As soon as we reached the door to unlock it, first a police officer came up behind us, and then at least seven other appeared after him. They asked us for identity documents. Although they spoke Albanian, which I do not understand very well, I realised that they were not allowing us to unlock the door of the church. After that, they soon returned the IDs to us,” Arsic said.

The Raska-Prizren Diocese described the ban as “open discrimination” against the Serbian Orthodox Church.

“Kosovo institutions continuously convey the message that our people cannot live freely and that basic religious and human rights do not apply to Orthodox Serbs,” the Raska-Prizren Diocese said.

Police gave BIRN a different account of what happened, however.

“Today [Thursday], while performing their routine duties in [Pristina’s] central zone, police patrols stopped a car with three people, two of them foreign nationals. After all the verifications were carried out, they were free to continue further,” the police said, adding that they did not have any information about “allegations about any religious activity”.

The unfinished church on the Pristina University campus has been the focus of controversy in Kosovo for the last two decades.

Its construction began in the mid-1990s, when Slobodan Milosevic was attempting to consolidate Serbian control over what was then the Serbian province of Kosovo.

Both the Pristina municipality and the university dispute the Serbian Orthodox Church’s claim to own the land.

A lawsuit brought by the university against the Serbian Orthodox Church was still under consideration at Pristina Basic Court at the end of 2021, the State Department report said.