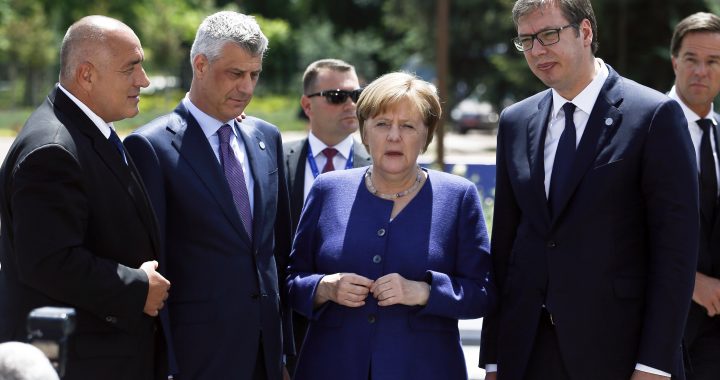 Veering off track, the Kosovo-Serbia dialogue is only a distraction

The EU lacks the proper tools to push the talks between Kosovo and Serbia to the next level, and this might play well for Vucic as he drags on the bargaining.

The Sofia Summit last week offered plenty of big words and little steps, leading to disappointment and cynicism among many observers. In the case of the dialogue between Serbia and Kosovo, the summit and its final declaration were even more sobering. The final declaration does not mention the dialogue or the normalization of relations between Serbia and Kosovo.

The behavior of the Spanish Prime Minister Rajoy has been a source of a lot the weaknesses of the summit. Not only did he boycott the summit itself–he only joined the informal dinner with other EU member states–his veto on the declaration for calling Kosovo a state and refusal to sit on the same table as Kosovo officials is not simply political but petty.

None of the other four non-recognizing EU members has been that destructive, and even Serbia which since the “asterisk” solution was at times difficult, continues to be a willing partner in regional events.

The signal from Spain has thus undermined the credibility and weight of the final declaration and continued the pattern of individual member states taking the EU hostage over their domestic concerns: Spain pulled a Greek performance in Sofia.

While Serbia could celebrate this as a victory for its position, that would be a mistake. Dialogue and normalization of relations is the only way Serbia can join the EU. Thus, taking Spain’s snub to Kosovo as an encouragement for Serbia would be a misinterpretation of the Spanish position. When years ago a high ranking diplomat told me and a group of diplomats from all over Europe that Spain was not recognizing Kosovo out of respect for the Serbian constitution, the audience could barely hold back their laughter.

In the end, the Spanish intransigence over Kosovo might dig the grave of Serbia’s aim to join the EU. An agreement between Serbia and Kosovo on normalization will need to unlock a realistic EU perspective for Kosovo. Why would Kosovo agree to any settlement with Serbia otherwise? If Spain is going to be more Catholic than the pope (for which there is some historical precedent), then an agreement between Serbia and Kosovo might not be enough for Spain, and thus reduce incentives for Kosovo to striking a deal. We might find ourselves in the ironic situation where Serbia will have to convince Spain to recognize Kosovo.

The dialogue between Serbia and Kosovo is meanwhile veering off track. There has been no progress made for months and the atmosphere remains tense. More problematically, the EU lacks the tools to take the discussions to the next level. It is clear that the format of the talks mediated by High Representative Federica Mogherini have run their course. A new dynamic and more pro-active mediation is need to transform the current dialogue into a framework that will lead to a contractual agreement, setting out the open issues and creating real opportunity for normalization, including UN membership for Kosovo and unlocking its EU path, as well as finding a way for Serbia not simply to just normalize relations with Kosovo to then block its future EU membership.

With new European Parliament elections upcoming in 2019 and a new Commission, Mogherini is effectively a “lame duck” in office for another year and unlikely to stay in office, considering the new constellation of power in Italy. Never strong, her position is even weaker and thus the ability to shape a final deal is improbable. In addition, ironically, the government in Kosovo is too weak, while in Serbia too strong, for a deal.

Any agreement will require broad social consensus. In Kosovo, the government is weak and divided and it took it several years to push through the border agreement with Montenegro, arguably peanuts in comparison to a comprehensive deal with Serbia. Even though Vetevendosje itself is also divided, opposition to any agreement would be likely to be formidable.

On the Serbian side, the increasingly autocratic rule of Vucic is too strong and dominant. For all the talk of “internal dialogue” the dominance of the Progressive Party, SNS, and Aleksandar Vucic is too stifling to generate open discussion that could lead to a consensus. Instead, the opposition is likely to reject any agreement both out of opposition to the government (and will thus paint itself as anti-Western in a way similar to Montenegro) and Vucic with his dominance will be tempted to ignore dissenting voices. Feeling his strength not only over the opposition, but also over a weak EU and Kosovo government, he will be tempted to not strike a deal. After all, he has every incentive to promise a deal and not to make it: his offer to be pragmatic and open to dialogue in Kosovo has allowed him to receive minimal criticism over media freedom, clamping down on independent institutions and the opposition in Serbia. If he were to settle with Kosovo, scrutiny from the EU and its member states would move away from Kosovo to domestic concerns. Thus, Vucic has every incentive to speak of compromise and not reach it, especially as the EU facilitators and Kosovo are weak counterparts and cannot force his hand.

Vucic is likely to continue to use the dialogue to maximize his bargaining power, hoping to extract more rewards from the EU or an exchange of territories. Of course, neither are likely, but may help extend the bargaining, buying Vucic time and serving his interests as he can argue that he tried to get the best deal at home, as the process in general lags behind.

Support for the EU in Serbia has declined over the past decade: while in 2009 60 to 70 per cent supported joining the EU, the numbers have since dropped and have supposedly been hovering around 50 per cent in the last six years. Such decline in percentage (although those opposed the EU are still only half of those supporting membership and the rest undecided) is also the result of the constant drums of anti-Western propaganda in Serbia’s tabloids, mostly following the SNS line. A declining support for joining the EU frees Vucic’s hand to forgo the promise of seeking Serbia’s membership and extract greater concession from the EU. While the European Commission, as reflected in its strategy from February, is aware that the current path is heading away from Europe towards greater autocratic rule and state capture, key member states of the EU are turning a blind eye. As a result, the Serbia-Kosovo dialogue will continue to be a perfect distraction.

Florian Bieber is Professor for Southeast European History and Politics at the University of Graz and director of the Centre of Southeast European Studies. He coordinates the Balkans in Europe Advisory Group and tweets at @fbieber.