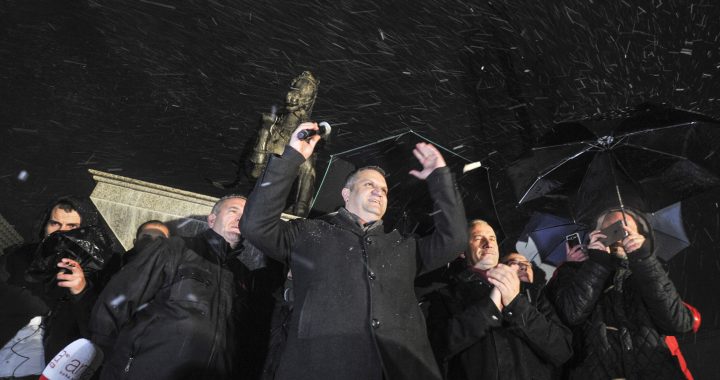 Incumbent Prishtina Mayor Shpend Ahmeti will likely have a second term in office, while rival party LDK won the most mayorships in Albanian-majority municipalities.

Though mail-in and conditional ballots have yet to be counted, based on preliminary results, Ahmeti claimed victory.

“With tonight’s victory you didn’t just win against one candidate, but against the entire government,” he said at a Vetevendosje celebration in Prishtina’s city center.

“We will work together with AKR and Selim Pacolli,” he added, referring to Vetevendosje’s municipal coalition agreement reached with the New Kosovo Alliance. “We also invite all political parties and assembly members to join in the reform, in stopping bad governance, and contributing to the continuation of good work in Prishtina.”

With 100 per cent of polling station data processed by the Kosovo Central Election Commission, CEC, there have been some big changes to local governments.

The race in Prishtina was tight; Ahmeti leads with 50.19 per cent of the vote against Arban Abrashi, mayoral candidate from the Democratic League of Kosovo, LDK. The number is subject to change since the data does not include conditional ballots or votes by mail.

Vetevendosje likely achieved mayoral successes beyond Prishtina for the first time with Qendron Kastrati’s win in Kamenica and Mytaher Haskuka’s win in Prizren.

Results from round one signified increased popularity for LDK, which won four municipalities without runoffs on October 22. In the second round, LDK won four more municipalities–Gjilan, Istog, Podujevo, and Vushtrri.

The Alliance for the Future of Kosovo, AAK, also had a successful election day, picking up 5 more municipalities, adding to the two mayorships won in the first round of votes. In Gjakova, Ardian Gjini won with 53.49 per cent against Alternativa’s Mimoza Kusari Lila.

Meanwhile, AAK’s central-level coalition partner PDK won four more mayorships on Sunday–Kacanik, Shtime, Ferizaj, and Dragash, adding to the one mayorship, Drenas, that the party won in the first round.

Serb-majority municipality Kllokot was won by Srpska Lista’s Strahinja Spastic, while Srpska Lista’s Dragan Petkovic won the revote of the first round in Partesh without the need for runoffs.

By the time polls closed at 7:00 pm, CEC declared the overall voter turnout to be at 38 per cent. Despite some minor incidents, election day was, overall, calm.
CEC’s final results are expected to be processed in the coming days. The EU Election Observation Mission in Kosovo is also expected to soon present its final report for Kosovo’s 2017 local elections.

Update, Tuesday November 21: CEC has issued a correction for Prishtina’s preliminary results, due to data entry errors. Now, Ahmeti leads with only 237 votes against Abrashi, not 307 as it was previously reported. This number still does not include about 1,800 conditional and mail-in ballots that still need to be counted for Prishtina.