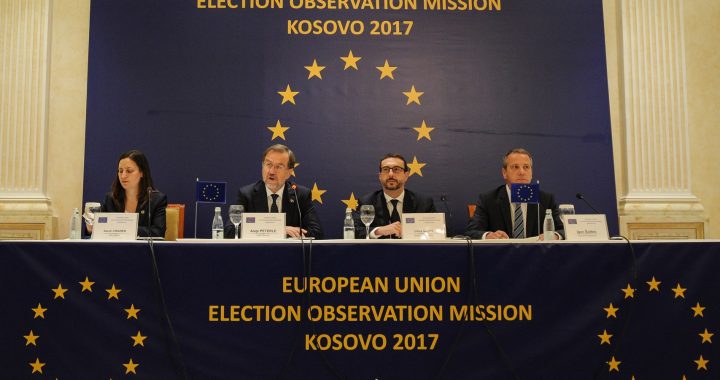 The Kosovo snap elections held on June 11 were generally peaceful and competitive, but marked by some long-standing weaknesses and voter intimidation, said Alojz Peterle, Chief Observer of the EU Election Observation Mission, at a press conference on Tuesday.

Peterle presented a preliminary report from the EU Election Observation Mission–which deployed about 100 observers across Kosovo on election day–highlighting problems with “inaccurate voter lists that are vulnerable to fraud, an electoral system open to abuse, and a largely flawed system for Out-of-Kosovo voting.”

Despite the shortcomings, Sunday’s elections were “mostly calm and low key,” the EU observers found. Yet a primary concern in the report remained instances of voter intimidation in Serb-majority municipalities.

“In Kosovo Serb majority areas, the election process was marred by intimidation and instances of violence from within the Kosovo Serb community against candidates and voters, as well as insufficient response from prosecutors and police,” the statement reads.

“This raises questions about the credibility of the democratic process in those areas.” The report referred to threats and intimidation against non Srpska Lista parties and candidates and  gun-related incidents in Leposavic.

At Tuesday’s press conference, Igor Soltes, the Head of the delegation from the European Parliament, said that the technical problems observed on election day were intensified by the timing; after the Kosovo Assembly passed a no-confidence vote in the government, Kosovo President Hashim Thaci called the snap elections within the shortest time frame possible.

“The consequences of this choice are visible, from the quality of the voters’ lists, to the possibility for voters outside Kosovo to vote, or to the preparedness of the election management bodies,” Soltes said.

The Elections Complains and Appeals Panel received a total of 171 complaints against alleged electoral violations and 18 appeals against CEC decisions. “Most of these complains regarded violations of the Code of Conduct during campaigning,” the report reads.

Other issues observed, Peterle said, include the failure to give clear instructions on whether or not Serb voters could use Serbian ID cards as valid IDs at polls in the north, high incidence of family voting, instances of abusive voter assistance, attempts by the PAN coalition to put pressure on the media, and “the excessive presence of observers from two political entities in breach of the law.”

Corruption platform KALLXO.com reported that the Democratic Party of Kosovo, PDK, and its coalition partner the Alliance for the Future of Kosovo, AAK, registered an NGO under the Regional Institute for Democracy, Human Rights and Political Studies in order to conceal 4,548 party-affiliated election observers.

“The NGO  was registered ‘in the last hours’ so to say, and we didn’t have any communication with it. It didn’t express any wish to communicate with our mission. Certain concerns were raised in that regard,” Peterle said. “We will carefully deal with this question [in the report].”

The EU Election Observation Mission’s final report is expected to be completed in two to three months.