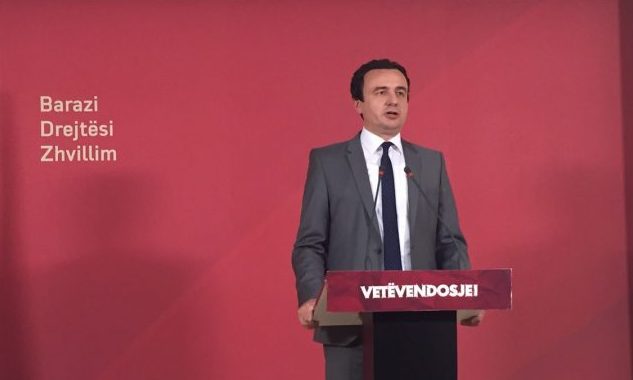 No state institution, including Kosovo President Hashim Thaci, will be able to obstruct the creation of a Vetevendosje government, said Albin Kurti, the party’s prime minister candidate, at a press conference on Tuesday.

“No can can stop the will of the people for change, which was shown on election day; not a single specific person,” Kurti said.

Kurti’s Vetevendosje was voted the second biggest political subject in the June 11th elections, with about 27 per cent of the vote, while the PDK-AAK-NISMA, or PAN, coalition came in first with about 34 per cent.

According to a Constitutional Court decision from 2014, the party that wins the most votes in the elections has the right to name a nominee for prime minister and Speaker of the Assembly. The decision sent the country into a six-month stalemate, which was resolved with LDK joining forces with PDK.

The 2014 court decision was also the reason why parties formed pre-electoral coalitions in a bid to become the biggest party in the country. If the court decision is upheld, the PAN coalition will be the first to nominate a prime minister.

Yet, in order to be able to form a government, the PAN coalition, which won 33.9 per cent, needs to form coalitions with smaller parties, including possibly the grand coalition LDK-AKR-Alternativa, or LAA, led by its PDK’s former governing partner LDK. If PAN fails to gather the necessary 61 votes in parliament, it is in the President’s discretion to invite the second largest party to form the government.

“President Thaci can create problems for himself, but not for us,” he later added.

Kurti called on the LAA coalition to start talks about creating a progressive government together.

Kurti said there is possibility that MPs from the PDK-AAK-NISMA could also be part of the coalition, since some opposed the current demarcation deal with Montenegro.

However, he did exclude the possibility of joining forces with the PAN coalition, because “there cannot be a new government with the old power structures.”

“Sunday’s elections were the third wave of enthusiasm in Kosovo: the first one happened in 1999 when Kosovo was liberated, the second when Kosovo declared independence in 2008, and the third on election day this year,” declared Kurti.

“Hope has returned to Kosovo, because courage has also returned.”